BSL interpreter for the BBC 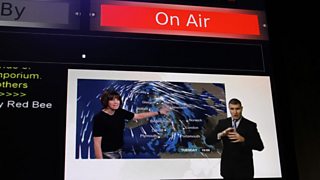 Since 1January 2014, Deaf viewers have been provided with additional weekend bulletins with an 'in-vision' signer. The service is provided by Red Bee Media's Sign Language Interpretation team. We asked one of Red Bee's longest-serving news interpreters, Anthony Mitchell, to explain his role signing some of the BBC’s news bulletins.

I’m one of a team of interpreters who are part of a larger group of translators. Together, we provide a British Sign Language (BSL) version of the day’s news and current affairs for the Deaf community. As well as live sign language interpretation on news programming, we also cover a wide variety of pre-recorded programmes, from children’s programmes to documentaries to current affairs.

Many people ask why sign language over subtitling? The reason is quite straightforward: BSL is the first or preferred language of many Deaf people in the UK. Moreover, BSL is quite different from English, with its own grammar, phonology and syntax - the language is three-dimensional, expressing meaning in simultaneous layers. Facial expression and body language are an integral part of the language also - what is spoken in 10 words can sometimes be conveyed with a single expression.

It would be fair to assume that sign languages have been used by Deaf people all around the world for as long as they have been in contact with each other. It’s part of human nature to relate and communicate with each other. In Britain, the earliest records of a sign language date as far back as 1570. Today, you can learn BSL at colleges and university, but you can also research the linguistics and the history as well at various educational establishments across the UK. Learning BSL is like learning any spoken language.

I began my career in live news interpreting in the early 1990s before the BBC News Channel came into being. Back then, the BBC would show a simultaneous transmission of BBC One’s 8am news programme on BBC Two for just 15 minutes each weekday morning with an 'in-vision' interpreter, one of whom was me. This opportunity came my way because I was an interpreter already for the BBC’s See Hear! programme for Deaf and hard of hearing people. I have since interpreted for both the BBC and ITV, at a time when TV channels began to go digital.

My day begins at about 5.30am, researching the top news, sport and weather reports both at home and abroad. This is vital, because in order to sign any news story, it is necessary to investigate the players, their roles and the event in question, to ensure the interpretation is the best it can be. An understanding too of the line of questioning taken by the journalist or reporter might take is also essential in order to reflect the tenor of each news item. This isn’t just a case of listening to what we hear and signing the best we can.

Every weekday, in addition to the new weekend slots, we provide three sessions of interpreted news for the BBC, 6:45 – 7:30, 7:45 – 8:15 and 13:00 – 13:30. Standing in the studio, on my mark, on my own, may seem from the outside to be a rather isolated existence. But when I am in the studio, I do not find it difficult to remember why I am there. I am acutely aware of the limited access the Deaf community have, compared to their hearing counterparts, to programming. The UK leads the way in its provision of accessible television programmes for the Deaf community but, that said, one must constantly strive to improve accuracy and fluency in the interpretation. It’s all very well having accessible programmes, but if the quality of the interpretation is poor your audience turn off! We’re all aware of the SLI interpreters we like or otherwise, but if at the very least they are accurate and fluent we are able to watch, listen and enjoy. This job is a privilege and with that privilege comes responsibility - to do one’s best for the Deaf community.

I interpret simultaneously between English and BSL, and, whilst I see a script for pre-recorded programming, the news is unscripted for me. The items vary between BBC Breakfast, the One O’clock News, press conferences, Prime Minister’s Questions, House of Commons debates and breaking news. I was working the lunchtime news the day Margaret Thatcher died. At the allotted time, the news screen shrank back to reveal me ready to work, but the news presenter was only just hearing the breaking news of her death, so, momentarily, he wasn’t speaking!

Of course, I had no idea what he was about to reveal. I’d already prepared that day’s potential stories, so it came as quite a jolt to realise I would be interpreting a single story for the One O’clock News, unprepared. This was the woman who had led a major Western democracy for 14 years, winning three successive general elections - and the announcement of her death was about to be memorialised. To my disadvantage, commentators had already prepared their eloquent and cleverly constructed packages about Mrs Thatcher’s contribution to the world. I, however, would be flying by the seat of my pants! The situation required me to remain calm, professional and above all to listen and interpret without prejudice, because, whatever one thinks about public figures, they divide opinion and, here, my own must not show.

Interpreters interpret the meaning of what is said. It isn’t a word-for-word translation, it’s concepts and meaning.  Consequently, what we offer our audience will appear different from both the subtitles and the spoken English being used on screen. Interpreters listen to what is being said and as accurately as possible we produce an interpretation of the original message, whilst also listening to what is coming next. The work is taxing given the register of the language used and the complexity of the formulated reports. One of the many pressures in this job is achieving the accuracy in one’s interpretation. This, of course, does mean mistakes can happen at any time, we are humans after all. With mistakes we try to deal with them as sensitively as possible, restarting the sign or sentence and possibly adding an apology. No different, really, from when you see a news reader who trips up with their lines. 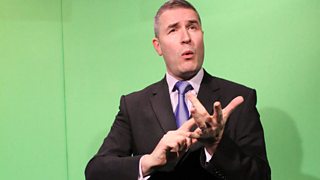 In the studio, I’m surrounded by equipment: lights, TV monitors, the green screen behind me (pictured) and a camera in front. Although the setting is artificial, my work is not. The interpreter is required to be engaging, clear, accurate and impartial. The community is at the heart of my work and when I happen upon people from the Deaf community in the street and on social media, some say, “Good job”. Being recognised by strangers does happen, and it can be a little surreal to be stared at in public or be approached by a complete stranger who thinks they know you especially given that my experience of the work they recognised me for is being surrounded by a green backlit cloth.

Anthony Mitchell is a BSL interpreter for the BBC