BBC Birmingham is getting bigger

So much about Birmingham and the Midlands has a connection with innovation - the link between Birmingham's big thinkers and big manufacturers in the 18th century created a so called “chain reaction of innovation”.

Between 1760 and 1850, people from Birmingham registered more than three times the number of patents than any other town or city in Britain. And now Birmingham leads the way in digital innovation. It’s home to a significant slice of the UK’s tech start-up community. More than 6,000 technology companies, including a fifth of the world-renowned British computer gaming sector, are based in the Greater Birmingham area, generating £1.6bn for the local economy.

So what better place for the BBC to locate its centre of excellence for skills, recruitment and talent development for the whole UK than in such an enterprising and forward-looking city? 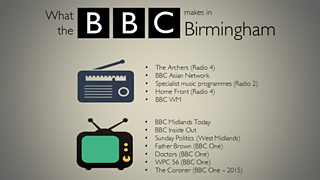 The BBC has always had a significant presence in Birmingham and the Midlands - I grew up watching Midlands Today, and it was at Pebble Mill that I got my first chance to work for the BBC. Now based around the city in The Mailbox, at our drama village in Selly Oak, and soon at our new digital innovation unit in Fazeley, Birmingham is still the home to many of the nation's favourite BBC programmes, from The Archers and Midlands Today, to the Asian Network, Radio 2’s Organist Entertains, BBC WM and Doctors. WPC 56 and Father Brown are both produced by our teams here, and the hugely-important English Regions Online team are also based at The Mailbox.

But it's fair to say that the BBC hasn't been active or engaged enough in Birmingham in recent years - despite having these strong teams based there. Tony Hall’s announcement in May 2014, to move the BBC Academy and other departments to Birmingham in 2015 is set to change that. And thats why, as someone who cares about the fortunes of the BBC and the Midlands, I leapt at the chance to get involved in our plan to reinvigorate BBC Birmingham. I’ve run the BBC’s children's channels for the last five years, and been involved in children's programming since soon after joining the BBC in the Eighties. But my new role, as Director of the BBC Academy and of BBC Birmingham brings together lots of things that matter to me.

BBC Birmingham will become the BBC’s centre of excellence for skills, recruitment and talent development for the whole UK. The BBC Academy, vital skills training for the industry, plus the core of our HR and Internal Communications departments, move to The Mailbox this year. Joining them are the BBC’s Diversity Unit, our Outreach and Corporate Responsibility team and The Space - the BBC’s pioneering digital arts partnership with Arts Council England. And our new Digital Innovation Unit – in the heart of the city’s creative quarter in Digbeth - opens for business soon.

All this – and the 300 plus hours of TV and radio we already produce in Birmingham - stacks up to a big commitment to making BBC Birmingham a sustainable, vibrant creative place, which plays its part in the life of the city and the Midlands for the long term.

For me, this is just the start. We will be doing even more work with local partners and the region's universities to help skill a diverse workforce not only for the BBC, but for the Midlands and the UK. My hope is that in the not too distant future, people across the country (and beyond) will see the BBC in Birmingham as the gateway to world class training and the best place to get the right digital and creative skills they need to forge a successful career in the media. The BBC in the Midlands can be the door to skills and careers for todays’ young people, as it was for me 30 years ago.

Joe Godwin is Director of BBC Academy and BBC Birmingham.

Books at the BBC

A Year of Song and Dance on the BBC