BBC anniversaries come thick and fast in the BBC calendar. In this year alone, we have 25 doof-doof years of EastEnders, 60 years of sequinned Come Dancing, and, on a darker note, 70 years of French pride since General De Gaulle gave his stirring address from Broadcasting House to rally the Resistance against a German-occupied France. 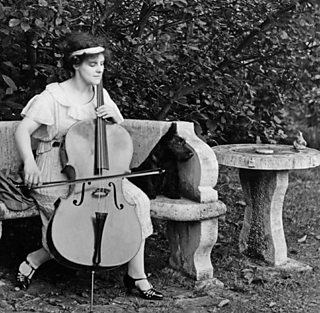 But I must confess to being partial - and one of my favourite BBC anniversaries crops up today. It's the quirky and idiosyncratic story of a nightingale and a cello. Once upon a time...

On 19th May 1924, BBC radio listeners heard for the first time an extraordinary duet live from a Surrey garden. The cellist was Beatrice Harrison, who had recently performed the British debut of Delius's Cello Concerto, which had been written for her. The nightingales were the birds in the woods around Harrison's home in Oxted, who were attracted by the sound of her cello.

Harrison first became aware of the birds one summer evening as she practised her instrument in the garden. As she played she heard a nightingale answer and then echo the notes of the cello. When this duet was repeated night after night Harrison somehow managed to persuade the BBC that it should be broadcast. Engineers carried out a successful test and the following night the live broadcast took place. Harrison played and the nightingales, eventually, joined in.

The public reaction was such that the experiment was repeated the next month and then every spring for the following 12 years. Harrison and the nightingales became internationally renowned and she received 50,000 fan letters. Writing in the Radio Times before the second broadcast, BBC Managing Director John Reith said the nightingale "has swept the country...with a wave of something closely akin to emotionalism, and a glamour of romance has flashed across the prosaic round of many a life". What a great prose style that man had!

And why does the 'glamour of romance' still touch me? I suppose it's partly for the same reason that Springwatch works its charm on audiences today. It's the belief that, even in this post-industrial age, we still have some relationship with our 'natural' neighbours. Nature touches us - and even more extraordinary, does not ignore us: a nightingale may answer a cello.

Children in Need says "Thank You"