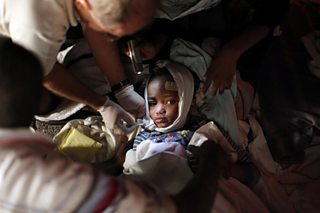 I'm writing this from one of the editing suites at Television Centre. The Producer and Editor are choosing shots to go in today's DEC Appeal for the Haiti Earthquake. Anyone watching the Appeal can't fail to be aware of appalling situation, but putting the pictures together really brings things home.

During the day the BBC will broadcast over 70 appeals for the disaster, across radio and television and also online. The first appeal was at 8 o'clock this morning on Radio 3 - there will also be appeals on channels as varied as BBC One, BBC Parliament, the HD Channel, BBC Alba and all the local radio stations.

Because of the scale of the Appeal, over a hundred BBC staff will also be involved, often doing quite small things, but all contributing to the overall impact of the Appeal. There are the radio and television producers, schedulers, web designers, presenters. Yesterday a lawyer volunteered, not to do legal work, but to sort out stills for web pages. Everyone says 'yes' when they are asked.

Back to the editing: The BBC has Editorial Policy and Guidelines which apply to all our output, we also have to comply with our Charter obligations.

For appeals, the guidelines most relevant are usually taste and decency and impartiality. For taste and decency, there's a fine line to be drawn between giving the audience information about the appalling plight of people affected by a disaster and respecting the dignity of those who are suffering.

There's also the issue of how graphic an image of suffering we can show, especially before the watershed. At the moment we're looking at a picture of a man lying on the ground. His hips, arms and legs are clearly broken and there's plenty of blood. The picture could go out in the BBC News at Ten, but probably not in the BBC News at Six, and not in our Appeal, as several of the transmissions are also before the watershed. Impartiality is not an issue for this appeal.

There are also criteria specifically for emergency appeals, which are agreed between the broadcasters and the Disasters Emergency Committee (DEC). These are:

1) The disaster must be on such a scale and of such urgency as to call for swift international humanitarian assistance.
2) The DEC agencies, or some of them, must be in a position to provide effective and swift humanitarian assistance at a scale to justify a national Appeal.
3) There must be reasonable grounds for concluding that a public appeal would be successful, either because of evidence of existing public sympathy for the humanitarian situation or because there is a compelling case indicating the likelihood of significant public support should an appeal be launched.

The first criterion is primarily about need. For this appeal, the need is evidenced on our screens and by governments and the humanitarian agencies. A second consideration is how much money is needed, i.e. are other organisations funding aid effort? In the case of Haiti, a huge amount of money is promised. However, the need is so great it cannot even be measured at this stage.

On a personal level, my own donation feels like a drop in the ocean. But it means I'm part of trying to make things better for people in Haiti. I would only hope that people watching the appeal feel the same way.

The second criterion is about the ability of the agencies to deliver aid on the ground. Things that get in the way of this can be physical access: this is the case in Haiti. For some emergencies, there may be government opposition to foreign aid, or a weak infrastructure. In Haiti, aid agencies have been working in the country for many years - they know the area and the people which will make a very difficult task easier.

The third criterion is about public sympathy. If we ask our audience, will they want to donate?