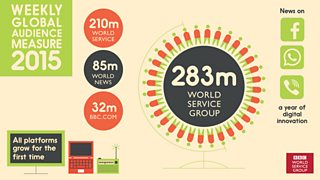 Two years ago, BBC Director General Tony Hall set us a target. He wanted the BBC’s weekly audience to reach half a billion people around the world by 2022, the year we celebrate our centenary.

Today, for the first time ever, we’ve released figures which set out how we’re measuring up to this number – and the good news is that we’re nearly two thirds of the way there, at a weekly audience of 308m.

We’ve recorded our global news audiences for decades, but this is the first time we’ve combined this figure with measured audience numbers for the other global BBC branded channels, like BBC America and BBC Worldwide’s thematic channel brands, to get a true picture of the BBC’s global impact and influence.

What do the figures tell us? For news – which includes the BBC World Service, our commercial services on TV and online, and our international development charity BBC Media Action - they show our highest audience ever, at 283 million, an increase of 7% on last year. And they show a changing world. For the first time, television is bigger than radio.

The increase in TV viewing is not only due to BBC World News TV but also thanks to our new World Service TV news bulletins, which are broadcast on partner TV stations around the world. We now have TV news content in 12 languages other than English.

A few years ago the World Service Group, then led by my predecessor Peter Horrocks, made a decision to invest in developing these new services, despite the funding cuts we were subject to. Today’s figures show that this strategy is paying off. But they also show that it is rather too soon to talk about the demise of radio – our number of radio listeners has actually increased since last year, and radio will continue to be an integral part of our service for decades to come.

Or perhaps I should say ‘audio’ instead because more and more people are indicating that they listen via podcasts or streaming online – a trend I’m sure will continue to grow.

Also for the first time, we’ve started measuring social media – specifically Facebook and YouTube – people like the audience of our Thai ‘pop-up’ service, launched last year in response to the military coup in Thailand.

This sort of pop-up activity on social media is becoming increasingly important for the BBC, especially around significant events such as the elections in India and South Africa, where we offered news services on chat apps such as WeChat and Mxit, or recent crisis situations like the Ebola outbreak or Nepal earthquake, when we offered lifeline services on WhatsApp and Viber respectively. Developments like these have put us at the forefront of the industry and will help us reach younger audiences.

The Thai news-stream also highlights one of the founding principles of the BBC World Service – to bring impartial, accurate news to countries when they lack it – although our largest market remains the US.

I want the World Service Group to be a global broadcaster of both impact and influence, so for me it’s completely right we’re reaching developed and developing markets at the same time.

Over the next few months we will be looking at how the World Service Group can grow and develop for the future.

You won’t be surprised to hear me say that we need to prioritise digital media, just as we invested in television. We are already digital innovators as shown by the social media examples I’ve highlighted above. They show how flexible and fast we can be – and also how many new opportunities there are for reaching people. We need to make the most of these opportunities while sticking to the values which make us the most trusted news organisation in the world.

And as we increase our impact and reach around the world, we also need to focus on places where people are lacking accurate impartial news.

Today, though, we celebrate the fact that around the world, one in every 16 adults uses BBC News.

All about the BBC's new trial with Spotify