Up close from afar: Explore the Plundered Tunnels of the Islamic State 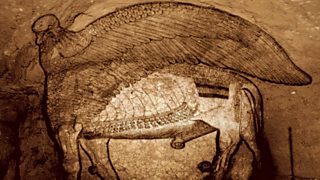 The BBC Arabic Documentaries team and I were actually investigating another story - The Last Christians, about the shrinking Assyrian community in Iraq and Turkey - when we received the invitation to the tunnels under Nabi Yunus mosque.

Ever since the tunnels were found they have been highly protected by the Iraqi government to prevent looting, so we never expected our request to visit to be granted.

What happened when we got there?

We brought a lot of equipment with us including a stills camera, a video camera, a 360 camera and huge amount of lighting. Photogrammetry is a way of capturing the real world in order to transfer it to the virtual world. It has correct measurements and correct textures, unlike traditional 3D models which are made manually.

Like using a camera instead of paint to capture a scene - one depends on the skill of the artist and the other on the skill of the photographer. It enables you to move within the space, as if you are right there. That is what virtual reality means - or at least that is what it means to me. It is a technology that is moving so fast that we were able to take 360 films of the tunnels, using a camera that mapped locations, and then worked with an amazing game developer and 3D artist, Filipe Gonçalves, to rebuild the tunnels, virtually. These sections, which were closely based on the real video, enabled us to link between the photogrammetry sections and the tunnels without having to take the audience out of the experience.

We focussed on three main parts of what we found for the photogrammetry. I took more than 1000 pictures altogether. 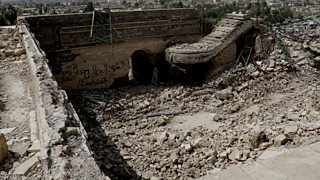 The first place I focussed my lens on was the destroyed Nabi Yunus mosque and shrine. For me, as a muslim and an Iraqi refugee, its was important to capture them and share it with rest of the world. It was incredible to see the wreckage of this beautiful mosque, with so many theories around whether it belonged to Jews, Christians or Muslims, reduced to rubble. Despite the politics and cultural conflict swirling around it had remained protected for centuries as a place of worship, then in 2014 the Islamic State Group said it was not a place of prayer but of heresy and blew it up.

The intricate detail of this form of photography really brings the destruction home in a way that I feel cannot be recreated, with even the best of stills. Sometimes I am numbed to the pain inflicted on Iraq and the region, I think the audience is too sometimes, but this sort of storytelling helps me forget my daily struggles for a minute, and immerses me in the place.

The Lamassu and the Three Women 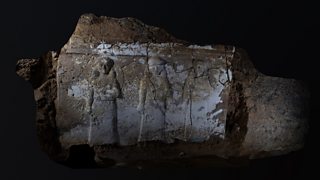 Another discovery we wanted to bring to life was the Lamassu. It's a mythical creature with the body of a bull or lion, wings of an eagle and a human head, they were thought to have guarded entrances to important Assyrian places.

We found two in the tunnels and the archaeologists actually found several more on that very day. These Lamassu were a symbol that the Islamic State group went out of their way to destroy and disfigure upon their arrival in Mosul. The UN warned in 2017 that the destruction of of cultural heritage may well be a war crime - IS fighters posted evidence of their potential war crime for the world to see online, as part of their propaganda. Nobody will be able to damage the images we have created of these statues. They could even be used to recreate the lost antiquities with 3D printing technology.

The plunder and sale of antiquities is widely believed to be the second source of income for IS after oil. Locals told me IS guarded these tunnels day and night and did not use them for shelter or fighting. We will never know what was taken from the tunnels we visited before the fighters left. With so much history disappeared we had to capture the three women we saw with photogrammetry. They are so unique in their bold disposition because they stand alone in the Assyrian era without the shackles of slavery or signs of subservience usually reserved for images of women in the era. Through our technology, their faces can be studied up close from afar, their stories discovered, told and then retold by historians around the world.

Once we had created all the images we had to find a place to host them - we looked into the world of gaming stream sites. We chose to work with Sketchfab, Inc. Then we needed to make it work for the BBC. Our talented developers and designers worked to create a sort of frame within which the tunnels sit. They made it easy to navigate and accessible for all our audience, including the deaf and blind.

A few weeks after we left the mosque the government blocked all the entry points to the tunnels. I hope that one day global and local historians, art buffs and even my daughters - whose grandparents were born two hours away - will have the chance to see these treasures and that their secrets will be explored and written about, not lost, for future generations.

I have been to so many IS tunnels when covering Mosul for BBC news, they smelled of blood and were claustrophobic, but the tunnels under Nabi Yunus were something different. I wanted to spend as much time as possible not only taking the pictures but to look at the beautiful sculptures by going through the nest of tunnels. It is now the second winter after IS was defeated and I am worried that if water damages the tunnels we will never be able to see what more was hidden there.