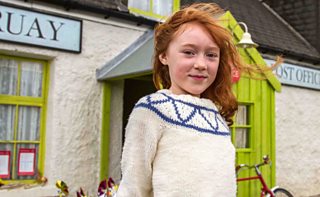 Sara Harkins is Creative Director of BBC Children's at BBC Scotland, and Co- Executive Producer (with Michael Towner) on the new series of 'Katie Morag' on CBBC and CBeebies. Knowing she was a fan of the series of books and hearing she was excited to tell us about making the latest series, we asked her some questions.

Why makes the 'Katie Morag' series so popular?

Everyone involved in the making of ‘Katie Morag’ - the TV series - from the cast and crew to Kay Benbow the Controller of CBeebies who commissioned the series, have fallen in love with author Mairi Hedderwick's international bestselling books of the same title.

All the characters in the books and series are beautifully drawn but Katie Morag is especially wonderful – she’s feisty, she’s kind and she can be a bit naughty too. Ultimately she is a child that children watching at home, can relate to and identify with. The sense of community within the stories and the multi-generational cast has also been an important factor in the success of the series. The series appeals to all ages and families can sit down together to watch and enjoy together.

Particular credit must go to Lindy Cameron (Executive Producer and Editor) and Don Coutts (Director) from the Scottish independent company Move On Up, who had the vision to turn 'Katie Morag' into a television series - they've done it just brilliantly.

Throughout the production process everyone’s passion to make an authentic and entertaining series shines through, from the wonderful scripts, production design and music to the beautiful cinematography, costumes and of course to the stunning Scottish landscape itself. The performances of all the actors are excellent too - both the humans and all the animals! It was particularly lovely to see Mairi herself take part in the first series, very fittingly playing the part of the Lady Author.

Why is the series special to work on?

I’ve always loved the 'Katie Morag' books and read them to my three children when they were growing up. I was brought up in a little village called Kinlochbervie in the far North West of Scotland, so the landscape in which Katie’s escapades are set really resonate with me and remind me of my own childhood. In fact when I was little, wellies were my favourite footwear too!

So, when the opportunity arose to make 'Katie Morag' into a CBeebies series I was tickled pink. It’s been a labour of love to work and particularly been a real pleasure to go on location to the Isle of Lewis where both the first and second series were filmed. I usually travel by road to Ullapool and then get the ferry to Stornoway. The scenery is stunning and the support from the local community has been amazing.

What has the critical reaction to the 'Katie Morag' series been like ?

We've had great critical success which is wonderful. There was a Children’s BAFTA award for Cherry Campbell (who plays Katie Morag) for Best Performer – the youngest BAFTA winner ever. The 'Katie Morag' team also won Best Drama at the Children’s BAFTA's, and have won Best Children’s Programme at the Royal Television Society Scotland Awards, the Scottish BAFTA's and the Freesat Awards. The results for the Best Drama category nomination at both the Kidscreen and Broadcast Awards will be announced in February. Keep your fingers crossed!

Whilst winning awards is 'fabbydoo' (for anyone who hasn't seen the series, that's a favourite line of Katie's!)  it’s the fact that the audience love Katie Morag that is the most important. We get lots of great comments from children and grown-ups alike showing their appreciation of the show. That’s the best award of all.

Books at the BBC