Head of Music, Radio 2 and 6Music 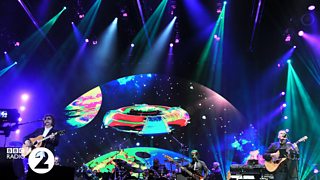 Ahead of tomorrow's broadcast on BBC Four of 'Jeff Lynne's ELO at Hyde Park', Head of Music Radio 2 and 6 Music, Jeff Smith tells the story of how Radio 2 managed to convince Lynne to play their annual event.

“It’s good to remember that this is a dream job, whether you’re performing or working in broadcasting or the biz, so dream.”

Those were the words of Iggy Pop as he delivered this year’s BBC 6 Music John Peel lecture from the Radio Festival in Salford.

My dream as a kid was to work in music and radio. And the music that provided much of my early inspiration was that of Jeff Lynne and the Electric Light Orchestra.

I’d seen them from very restricted view seats at Wembley Arena as a teenager in 1978 and was thoroughly mesmerized by them from the moment they took to the stage.

Fast forward to 2012 and in my current role of Head of Music Radio 2 and 6 Music… I was listening to new material from my old hero Jeff Lynne. His manager Craig Fruin was sitting in my office, playing me this music and wondered if there might be a place on our stations for Jeff today.

As a fan I was excited to hear what Jeff had been doing. I know Radio 2 listeners are predominantly fans of ELO too and upon hearing the great new music I had to ask that if Jeff were ever to consider performing live, it would be lovely if he’d think about appearing at our big annual event – Radio 2 Live In Hyde Park.

Knowing Jeff hadn’t been performing fully live since the mid-80s I expected a long wait.

Then last year after a brilliant TV documentary about his life, Jeff popped up on the BBC Children In Need Rocks event with a couple of ELO songs. It was then I knew he was warming up for potentially more.

I contacted Craig his manager and we discussed various ideas – but thankfully he had kept the Hyde Park idea firmly in his head.

The clincher for us came when Jeff appeared as a guest on Chris Evans’ Radio 2 Breakfast Show. Chris, as another huge ELO fan, was desperate to know when we might see more of Jeff and his music live on stage. Jeff hinted that we might and it was then that I started to discuss the actual practicalities of Jeff doing our Radio 2 Live In Hyde Park show in September 2014.

We had to overcome one substantial issue: ELO no longer existed as a band but we had the core of Lynne and Richard Tandy. I knew Mike Stevens as the hugely talented musical director who had used the band he formed to support Take That to back Jeff and Richard at CIN Rocks. He was also another massive ELO fan. So I contacted Mike and he was more than delighted to take on the project.

This was no mean feat. His seven piece band was supported by two backing vocalists and the BBC Concert Orchestra and Mike had to recreate all of the arrangements and orchestral parts for 19 of Jeff Lynne’s songs.

Following two weeks of rehearsal and a production sound check, Jeff Lynne’s ELO were live on stage in Hyde Park in front of a sell-out crowd of 50 000 people. It was a moment to remember. The crowd were in absolute awe as he took to the stage and played the first inimitable chords of All Over The World.

So there I was over thirty years later but this time watching Jeff Lynne’s ELO from a much better access point than I had in 1978. I was side of stage and had one of the best views in the whole park.

It’s a moment neither Radio 2 nor myself could have dreamed of. It also gave millions of other ELO fans prime vantage points on air. A huge radio audience tuned in and a staggering 1.19million viewers tuned in to watch on the BBC Red Button - almost double the audience of last year. Radio 2 Live in Hyde Park is the highlight in the Radio 2 musical calendar. Since it started, it has grown from strength to strength.

And now people can enjoy the experience all over again as BBC Four broadcasts the entire set – a programme of brilliant music and brilliant performance by one of the true greats.

Jeff Smith is Head of Music Radio 2 and 6Music.