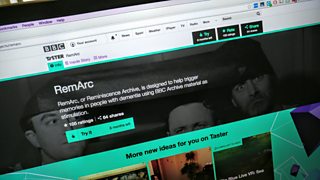 In May 2016, during Dementia Awareness Week, and as part of the BBC Living With Dementia Season we launched the first version of BBC RemArc - the BBC Reminiscence Archive - which is designed to trigger memories and reminiscences in people with dementia. Today we have launched an updated, improved version of RemArc. This blog explains why we built RemArc, how the project came about, and what we have learned in the process.

Dementia effects memory, and in particular, short-term or ‘working’ memory. In the later stages of dementia, the memory can be wiped every 10 seconds, yet memories from earlier years (typically ages 14-40) often remain intact.

Triggering these intact memories and stimulating conversations about them can improve the relationship between people with dementia and their families and carers, which in turn can improve the level of care they receive and their quality of life. This is the principle of 'reminiscence work', which is increasingly used in care homes, hospital dementia wards and other dementia support services.

A few years ago, my team in BBC Archive Development were approached by Dr Norman Alm from the Computing department of the University Of Dundee. Dr Alm’s team had spent years researching how technology could be used to support people with dementia.  As Dr Alm explained the concept of 'reminiscence work' and its benefits, we realised that the BBC’s archives could be put to good use in this area, as stimuli for triggering memories, if delivered through an appropriate medium. We agreed to work with Dr Alm to design and build an online reminiscence archive, using material from the BBC Archives.

We wanted to achieve a number of things with RemArc. Firstly, and most importantly, to use BBC archive material to benefit those of our audience members who have dementia, their families and their carers. We are confident that amongst the 1,500 items from our archives that are available on RemArc, there will be something that triggers a reminiscence for everyone.

Secondly, we wanted to demonstrate that it is not only the famous shows and well known historical events captured in the BBC’s archives that are of interest and value – a very bland-looking film clip, or the most obscure or minor detail captured in a photograph from the Forties, can mean something significant to someone out there.  Dr Alm and his colleagues’ work had demonstrated that generic material, rather than personal material, tended to elicit the strongest reminiscences.

Thirdly, we wanted to make sure that our work can be of benefit to the greatest number of people. To that end, we are making the RemArc software available for free under an open source license, so that people can build their own reminiscence archives, either in the UK or reversion RemArc with new languages for use abroad. We are also making the archive material featured in RemArc available for personal and educational use, via the Research And Education Space platform, or via direct download of individual items from the website, under the terms of the RemArc License. To the best of my knowledge, this is the first time that the BBC has open sourced a complete user-facing product, the first time that the BBC has published archive metadata as linked open data, and the first time the BBC has made archive material available to download for non-commercial re-use under such a permissive license.

Following the launch, we wanted to see how RemArc worked in practice, so, supported by the Alzheimer’s Society, I visited a number of groups of people with dementia. Over the summer of 2016, I spent time with 53 people with dementia, letting them try out RemArc, listening to their ideas, observing their responses, and noting down their ideas and suggestions.

This was a hugely valuable and informative process:  it is impossible to know how any product or service is actually going to be received by its intended users, whether it does what you hoped it would, and whether people respond to it and interact with it as you had expected.

What did we learn from our test users?

Firstly, we learned that using archive material to trigger memories and reminiscences really does work.  During the sessions many memories were triggered, sparking great reminiscences and conversations, and seemingly enhancing the relationships between people with dementia, others in the groups and their carers.  It was also notable that a large number of people said that they remembered more about their past than they thought they would.

Secondly, we learned that the online, tablet based approach and the interaction design we used seems to work well for people with dementia.  However, several improvements were suggested, which are outlined in more detail later in this blog.

Thirdly, we learned that reminiscence can be very enjoyable, engaging and, quite simply, fun. During most of the testing sessions, which were initially to last around 20 minutes, I had to ask the groups to return the tablets after an hour, as they were so engaged with RemArc, and having so many great reminiscences!

To illustrate, here are some quotes from the sessions:

"It takes you back to what you used to do"

"Makes you realise how much you thought you’d forgotten"

"I could sit here all day"

"It's amazing that this resource is there, forever"

What has changed in the new version of RemArc?

As a direct result of the user research, we have made a number of changes to RemArc: adding a button to display information about the archive material; increasing contrasts, font sizes and button sizes; changing the ‘Home’ button to ‘Start Again’; and making it easier to load a refreshed set of content.

With the updated version of RemArc we are confident that the interface design and interaction model is fit-for-purpose, so we do not expect to be making any further changes to its ‘look and feel’ in the near future.  We hope to run some additional trials in conjunction with other dementia-related organisations, and we are waiting feedback from a current trial in a dementia ward in a hospital in Scotland. We hope that the content we have made available gets reused, and that people find other uses for the RemArc software that we have open-sourced.

To try the new version of RemArc, simply select a 'Theme' (such as Sport, Events etc.) or a 'Decade' (1930s, 1940s etc.) and choose whether you wish to have 'Image, Audio or Video' content. The results are randomised each visit, however items can be 'favourited' to return to later.

You can try RemArc here.  There is also a version without the page header and footer.

If you want to find out more, please contact jake.berger@bbc.co.uk

History is written by the victors: The inspiration behind Viceroy's House