This is the first post in a new series of BBC public policy blogs, which set out our thinking, discuss ideas, and stimulate debate on some of the key public policy questions facing the BBC.

Some argue that the licence fee is outdated and should be scrapped; others that it should stay but be distributed beyond the BBC. It's right that these issues are debated and that we engage with the counter-views.

What the BBC is for and how it should be funded are inextricably linked. I think there are four basic tests for the BBC's funding mechanism: universality and social value, great programmes at an affordable price, creative sector investment, and independence. This post examines whether the licence fee still meets these tests. My next post will consider the alternative of subscription funding.

Measured objectively – weekly reach, audience appreciation, investment in new British content, level of public trust, and value for money - the BBC performs well. And the value the BBC gives the British public and the creative sector is, I would argue, because of the licence fee and not despite it.

Beware techno determinism. Just because digital technology makes it possible to change the way the BBC is funded (well, for TV at least and only at a significant cost), that doesn’t mean it’s desirable or inevitable. The prior question should be: what’s in the public interest? Changing media consumption is a reason for future-proofing the licence fee so that it applies to on-demand use of BBC TV programmes, but not a justification for scrapping it.

To determine how a good or service should be provided, you should first determine the purpose of that good or service. The BBC’s Charter and Agreement sets out what the BBC is for. It has an intrinsic purpose: to provide programmes that inform, educate and entertain people as individuals. And it has an instrumental purpose: to deliver external benefits to society through, for example, creating a richer culture, promoting democratic debate and building a stronger sense of community through shared experiences. We know that the market works best when it includes a successful public service broadcaster; far from crowding-out commercial players, public service broadcasting supports their growth.

We should, of course, debate the extent to which the BBC is fulfilling these purposes and challenge it to do better. But for as long as we believe they are important, it is surely socially just that the BBC’s services are universally available to all on equal terms. It is also prudential as the social and cultural value of the BBC is a function of its widespread consumption.

By virtue of the BBC's purposes and range of services, we all benefit from paying the licence fee. 96% of UK population consume the BBC each week. Our services are actively chosen 140 million times a day, despite the array of media choice and very low switching costs. This probably makes the BBC the most used public service in Britain.

Because of this reach, we are not asking lots of people who do not use the service to pay for it. Compared to many other public services, the level of cross-subsidy in the BBC is low. This is a major reason why people support the licence fee, because it is not merely of value to all – it is of value to them.

And everyone wins from the licence fee because everyone pays. The licence fee is a form of shared investment, akin to the pooling of health risks for mutual security. Because the licence fee shares the cost of the BBC as widely as possible, it keeps down the cost for each individual household. For 40 pence per day, every household gets access to 8 network TV channels, 10 national radio services, and online services. 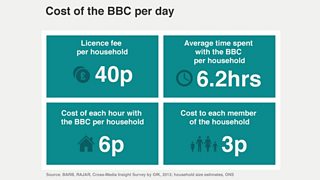 Different funding mechanisms create different incentives and choices. The licence fee means the BBC serves the audience as an end in itself and it creates a hugely valuable, democratic incentive to engage with and reflect the needs of everyone not just a few.

Because of the licence fee we get greater choice in our media. The BBC has the space to be distinctive in the range and depth of the programming we offer – from Doctor Who, Line of Duty, Strictly Come Dancing, The Thick of It to Brian Cox’s Wonders of the Universe, Frozen Planet, Panorama, the Proms and our coverage of the World War One Centenary. The schedules of our radio services are far more diverse than those of commercial stations. As an example, in a typical week, Radio 1 plays 325 different songs in daytime, compared to 140 on Capital FM. Across a month (all hours), Radio 1 plays over 3,200 different tracks – compared to around 200 a month on Capital.

It's telling that very few industry witnesses to the Culture, Media and Sport Select Committee inquiry into the BBC questioned the principle of the licence fee. The mixed funding model in UK broadcasting has meant two things – a bigger overall pot for investment in content, and better, more varied programmes, because of competition for quality (but not funding) between the BBC, advertiser-funded public service broadcasters and subscription-funded channels. The licence fee acts as the risk capital for the British creative sector – allowing the BBC to invest for the long-term, to discover and take risks with new talent and to support British ideas, writers, artists and musicians. We account for over 40% of total investment in UK original content yet only 22% of total TV revenues.

Some of these benefits could, in theory at least, persist if the BBC were to be funded out of general taxation. But this model would fail to meet the test of independence and direct accountability. The licence fee is, in effect, a hypothecated fee. It allows the public to make a simple, direct link between the benefits they receive from the BBC, and the outlays they make. In turn, it connects those providing the services to those paying for them and allows the BBC to be held to account for how the licence fee is spent.

A conundrum in public service broadcasting is how to ensure that a publicly-funded broadcaster can remain independent from political control. The licence fee is a necessary, if not sufficient, part of the solution. It ensures that it is the British people who pay for the BBC, not the government. Though the government sets the level of the licence fee, the mechanism is designed to make the BBC independent of the cycle of annual government spending decisions.

These virtues of the licence fee have arguably been eroded by the recent ‘top-slicing’ of the licence fee to fund government policy initiatives. As part of the last licence fee settlement, around £250 million per year of licence fee income was earmarked to pay for a range of non-BBC activities, including broadband infrastructure and local TV. Whether this is an appropriate use of the licence fee merits debate at Charter review.

The reasons why the licence fee works in theory, explain why it works in practice. A nationally representative survey of 1,015 UK adults by Ipsos MORI shows that public support for the licence fee has grown over the last 10 years, while support for subscription has fallen by over half (see below chart). The licence fee is the top choice for funding the BBC across all ages, socio-economic groups and whether you’re in a Freeview, Sky or Virgin household. Our most recent research suggests willingness to pay the licence fee is high, with 7 out of 10 people prepared to pay the current level of the licence fee at £145.50 or more. 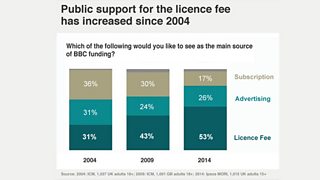 What about choice, inefficiency and regressivity?

Three criticisms are often levelled at the licence fee: it denies consumer choice, is inefficient and has a regressive effect.

In economic terms, the BBC is not like most goods or services. Consumers of BBC broadcast services are not rivals. Consumption of the BBC’s broadcast TV and radio services by one person does not prevent consumption of the same services by another and the BBC’s marginal costs of supplying these services to successive people is effectively zero once content and other costs have been incurred. It is therefore efficient to spread the BBC’s costs widely and distribute its services to all those who get even a small amount of enjoyment from using them. In this way, the economics of the licence fee supports the BBC’s public purposes.

Even if there is a strong utilitarian argument for the licence fee, what about the lack of choice or welfare loss for those who say they value the BBC at less than the cost of the licence fee? Unlike most public services, there are very few households that pay the licence fee but do not actually consume BBC services. The best response, in my view, is for the BBC to increase the value that we give these audiences and we’re developing plans to do that. The alternative of excluding this group from BBC services would erode the social benefits that flow from universal access. And the costs of the BBC would go up for everyone else, with many being priced out, which I return to in my next post.

Why subscription isn't the best way to fund the BBC