The festive season begins when the announcer says so 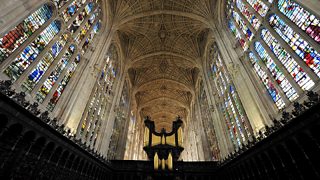 My Christmas starts with Advent, signposted by the Sunday afternoon broadcast of Radio 3’s Choral Evensong. The broadcast is the starting point for a month of preparations, culminating in Radio 4’s Nine Lessons and Carols on Christmas Eve and a big warm Italian-influenced family get-together in leafy Purley soon after.

Both services hark back to childhood memories. My first experience of Nine Lessons was our school carol service – a seemingly grand affair in St Edmundsbury cathedral attended by every pupil and their parents. Those with a demonstrable ability to sing processed up the aisle to Once in Royal David’s City. Those without shuffled uncomfortably in the pews, bored by proceedings.

The order of service followed that of the Festival of Nine Lessons and Carols. Readings and congregational carols were interspersed with various John Rutter creations. The air was cold and the organ was loud.

I had always thought that our school carol service, and the Christmas Eve service it aped, was the beginning of Christmas. Thirty-five years later I’ve changed my mind.

A few years after my first school carol service, I joined the school chapel choir, a subset of keen and able singers who sang in church services at school and various churches across the county. One of those events – one we all initially resented slightly because it fell on a Sunday afternoon in late November – was the Advent carol service. This was a much smaller affair, attended by maybe only 50 in the congregation. The advent carol service competed for my enthusiasm. Spoilt by the scale of the end of term Carol Service, Advent felt like an effort.

One year the service was billed as a candlelit event. Our opening carol - Veni Veni Emmanuel (O Come, O Come, Emmanuel ) - suddenly took on a new significance. Intimacy and modest theatrics were combined with a majestic introduction from the organ, an eager congregation rising to its feet and an insistent and irresistible kind of commitment all condensed in the most deliciously austere of carols.

O Come O Come Emmanuel was for the hard-core singers it seemed to me. Us in the school chapel choir were the advance party, signalling the start of end-of-term countdown. 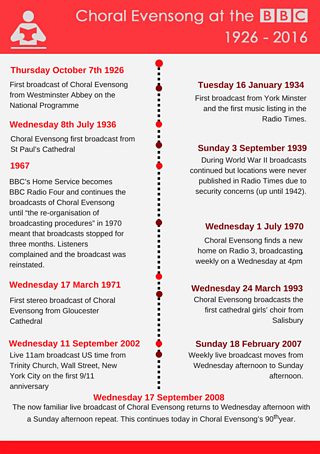 Today, Choral Evensong fills a gap. It gives me an opportunity to participate in a live relay of an event that stirs up unexpectedly fond childhood memories. But its magic is more than O Come, O Come Emmanuel. Like Nine Lessons it is, I now come to understand, the opening introduction given by the announcer. If ever there was a script I long to have an opportunity to read on-air it's this:

The pattern of the liturgy reflects the season of Advent's growing anticipation both of the celebration of Christ's nativity at Christmas and looking forward to his second coming in glory.

There are four sections in the service: the message of Advent; the word of God; the prophetic call; and, the Christ-bearer.

And each section consists of antiphons, hymns carols and prayers with lessons from the Bible read from members of the College.

The full order of service can be found on page 128 of Radio Times and on the BBC Radio 3 website.

O Come O Come Emmanuel  takes on a rich significance today. It’s the moment when I feel I have permission to get stuck into my preparations for the festive season. It’s when I pickle, plan, decorate and reflect, a time when things glisten, dangle, flicker, and bubble, and a time when I start making plans for the next twelve months. And when I hear O Come O Come Emmanuel's crawling base, rousing refrain, and terrifying descant a tear comes to my eye. I wouldn't want it any other way.

It’s signalled now, not only by a carol, but by a script read out on BBC Radio 3. That’s when the season begins – when the announcer says so.

Jon Jacob is Editor, About the BBC Blog

Funny that: The highs and lows of comedy production