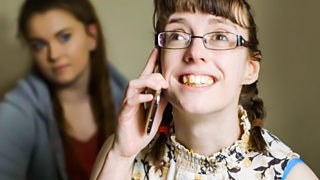 Twenty-six year old Nicola was diagnosed with Cerebral Palsy at the age of two. She is one of eight disabled job seekers whose stories are told in BBC Two’s Employable Me to take on the (seemingly impossible) challenge of finding employment. Nicola has a first-class honours degree in Multimedia Journalism and although she relies on her walking frame and lives with frequent pain, she is willing to do whatever it takes to prove to employers she’s got what it takes to be offered a full-time job. On the UN International Day of Persons with Disabilities Nicola reflects on her Employable Me experience.

If you had asked me a year ago about my life with cerebral palsy I’d have told you that it impacts on my movement and ability to get around. I would have probably told that there isn’t a day that goes by where I don’t hurt because of my disability, and if you’d asked me in the right way I might have owned up to the fact that this gets me down sometimes. One thing I most definitely wouldn’t have accepted is that I feel my CP might be part of reason I haven’t had a job that wasn't freelance or an internship since I got my first-class honours degree five years ago.

Today though, I’d give you the real answers. More often than not my pain is so bad I wish I could remove various body parts, and I find the journey to a job interview far more nerve-wracking and difficult than the interview itself.

So, you may ask, what’s changed? It’s certainly not my disability. That’s life-long.

What's changed is me. For the past year I’ve been filmed for the second series of Employable Me on BBC Two. What started out for me as my way of raising awareness to help others, having long-since given up on my own job prospects, turned into the most important personal journey of my life.

For as long as I can remember, people have written me off; told me I would never do X or Y because of my disability, and I’ve always, always, proven them wrong, until my failed job hunt. My disability has never stopped me doing anything in my life (apart from being able to tie my shoelaces) and I absolutely did not want it to be reason for my unemployment. I wanted my failure to be as a result of something I can control.

I shielded the people who could give me a job from the reality of my cerebral palsy, but there is no way I could shield them from the electric blue walking frame or how unsteady I am on my feet. They’re going to be the first things people see when they see me. And, let’s be honest, they’re going to make some people nervous.

With Employable Me I had to lay it all out on the table, and people were okay with it. I was okay with it. No one told me I couldn’t do something, they just told me not to make life harder for myself. They gave me permission I didn’t know I was looking for.

This is one of the reasons I’m glad my episode airs on 4 December, the day after the UN’s International Day of Persons with Disabilities (3 December). This year’s theme is inspiring disabled people to raise awareness and cause change. I feel like my story shows the importance of that and makes people able to do the same, Otherwise I’d keep my struggles to myself still and not give myself the chance to lessen them.

I won’t say that Employable Me saved my life, but it did save me from myself.

Nicola Golding is a writer who features in BBC Two's Employable Me.

Catch up with Nicola’s story on BBC iPlayer.

BBC Two’s Employable Me continues on Monday on BBC Two at 9pm.

Telescope 2017: A look at the nation’s viewing habits