Continuing our series of Radio Drama blogs, David Timson, an actor who may hold the record for the number of times he’s been on the BBC Radio Drama Company having been a Carleton Hobbs winner himself some 44 years ago - in 1971, remembers his early days in studio. 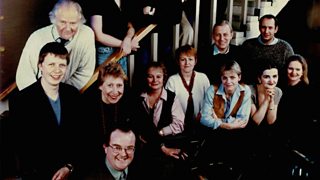 I don’t think that many Drama Students have their sights set on a career in radio drama. As they near their final months at college they are more likely to be dreaming of the RSC or National, TV or Hollywood. But for me in 1972 as I came to the end of my training at the Guildhall all my thoughts were focusing on BBC Radio, for I had won the coveted BBC  Student Prize, the result of a competition, sponsored by the BBC, for all Drama Schools throughout the country. The prize was no mean award, for it led to six months on the BBC Drama Rep, a team of actors and actresses who were, in those days, the nucleus of the radio drama output.

I am pleased to say that despite many changes at the BBC since the Seventies, the BBC Student Prize  is still awarded annually, though it is now more catchily titled, the Carleton Hobbs Award, after the celebrated radio actor, whose name is still a legend in the annals of radio drama. I am so old that I knew ‘Hobbo’ (as he was always affectionately called) and worked with him many times in the Seventies where his evident love of the medium, and gentle guidance of young beginners in the ways of radio was very apparent. The prize is very aptly named after him.

And while we are on the subject of name changes, today the ‘Rep’ is now known as the BBC Radio Drama Company, a more fitting title for the function they carry out. When the Company was formed in the Second World War, the Theatrical Repertory system was emerging throughout the country. Every major town had a theatre with a permanent company of players who could tackle anything from farce to Shakespeare, and the BBC copied this format for their pool of actors, who were necessary in a time of war when there was a shortage of actors - many of whom who had been drafted into the forces - to keep the flag of radio drama flying. Happily, the Radio Drama Company too has survived into the 21st century. Though going through many changes, old hands like me still affectionately call it the ‘Rep’.

So it was on a September morning in 1971, that I nervously entered Broadcasting House, and was shown up to the sixth floor, where the Drama department resides. The ‘Rep’ was run administratively by Marie Parotte,  a formidable and stern lady, of whom it was rumoured had worked for the French resistance! I could well believe it on that first meeting, but she proved to be a warm and almost motherly figure as I got to know her. After being shown the ropes; how to check bookings, getting the correct tax code and so on - I was introduced to the daunting array of Producers, each of whom had their own office on the sixth floor in those days. These men and women were as diverse as one can imagine, each with their own particular area of expertise, and their own set of eccentricities too. Archie Campbell, so absent-minded, he would sometimes come in wearing two ties; Betty (Ann) Davies, a very grand lady who every day wore a different hat, of varying degrees of flamboyance; and the wonderful Reggie Smith, a man with a heart of gold and enormous generosity of spirit - a legend in his own lunchtime. Reggie would finish a read-through of a play around 11am, and then would say, “OK – that’s lunch, back at 2pm.” On re-assembling in the afternoon, we would notice some additions to the cast – actors on hard times that Reggie had picked up in The George, and had offered a line or two in his current production. Sometimes it wasn’t at all clear if some of these ‘actors’ had ever spoken lines before, but it didn’t worry us, touched as we all were by Reggie’s extraordinary sympathy. He was unique, and the stories of him are legion.

My first production was a few days later, in Studio B11 in the basement of Broadcasting House (now, alas, a car park). There were four large studios in those days, B11, B10 (which had a dead room that technicians the world over came to marvel at), Studio 6A and Studio 8A (on the top floor, with the creakiest floorboards in the whole building – not ideal when trying to creep up the mic surreptitiously.) With the exception of Studio 6A, now renamed 60A, all the others have gone, reflecting the changing demands of radio drama. Studio 60A is today a state of the art drama studio, absolutely up-to-the-minute technically.

In those halcyon days of the Seventies, productions could have as long as five days in the studio, (if it was a Saturday Night Theatre for instance) and the process was quite slow and methodical. For four days there would be no recording, simply rehearsal: blocking moves on microphone – there were several mics positioned around the studio, reflecting the contrasting acoustics available to differentiate the location of scenes. In those days stereo was only just becoming established, and the opportunities it offered were seized on by imaginative producers like Raymond Raikes, who used to mark out semi-circles and numbers on the studio floor to assist the actors’ moves. After several run-throughs of the script in sequence, and note-sessions, the final recording would be made on the last day of rehearsal, as a non-stopping run. This recording would be the basis of the final broadcast, with pick-ups of scenes or lines that had not worked, recorded after the run, and added later. Today with the advances of technology and the reduction of resources, scenes are rehearsed and recorded immediately.

In that first production, I met the ‘Rep’ – in those days, a staggering 35 in number (today there are up to 16 at any one time). I was cowed by the age and expertise of these actors. Many, were deeply experienced in radio technique, and I learnt all I know from those doyens of radio drama: Ted Kelsey (now Joe Grundy in The Archers) and Nigel Anthony, Stephen Thorne, all happily still working, as well as the greats of the past; Hobbo, Norman Shelley (who would insist on having a music-stand to put his script on) and Marjorie Westbury. Marjorie was famous for playing the sexy Steve in Paul Temple, but who was in fact quite a diminutive, round person. The joy of radio is that it doesn’t matter what you look like, and you get to play roles you would never play elsewhere. Marjorie used to spend her spare time in the studio between takes, knitting, and there was a piece of graffiti in Studio B10 that said: ‘Marjorie will never die; she’ll simply unravel.’

I was 21, and was working with actors who had careers spanning 40 years – would I last as long I wondered on that first production? Well, here I am, still turning in performances and even mentoring some of the Soundstart award winners in their induction week. Here’s to the next 40.

David Timson is an actor

BBC Africa: Giving African football fans the Premier League in their own language