The Coronation and The BBC

In his third blog post for About the BBC, Matt Verrill turns his attention to two publications produced by the BBC previewing and reviewing the corporation's coverage of the Coronation in 1953.

June 2nd will see the 60th anniversary of the Queen’s Coronation. For the first time, the BBC was able to give full coverage of this rare and momentous occasion on television as well as radio (the fledgling television service being only 6 months’ old at the time of King George VI’s Coronation in 1937 and so carrying only limited programming to a limited audience).

The BBC issued two publications in 1953 celebrating the event; the first, The Coronation and the BBC, was a two ­shilling booklet issued in May 1953 to raise awareness of the upcoming broadcasts, and The Year That Made The Day book (for six shillings) looked back in more detail on the planning and preparation, as well as comprehensive descriptions of the day itself and how it was received both in this country and abroad.

The Coronation was announced on 7th June 1952, which gave the BBC just less than a year to plan and prepare what would be, at that time, the biggest outside broadcast in the Corporation’s history. The technical challenges involved in relaying the day’s celebrations to a domestic audience were many and complex, but such an occasion also demanded that the BBC provide a level of coverage to not only the rest of the British Commonwealth, but also to act as a service provider for the rest of the world.

As well as covering the Coronation ceremony from Westminster Abbey, commentary from key points along the procession routes would also be provided. In total, for both the domestic and overseas programmes, 95 commentary points were planned at 11 sites, catering for approximately 100 commentators. Each site had a control room where commentaries were mixed with sounds picked up by ‘effects’ microphones. Domestic (i.e. UK ­received) programmes were then passed through a central control room at the Abbey and on to Broadcasting House; non­domestic programmes had a separate control room at the Colonial Office. The number of circuits required (including backups) far outstripped the BBC’s capacity, and the General Post Office provided an additional 1,300 circuits. 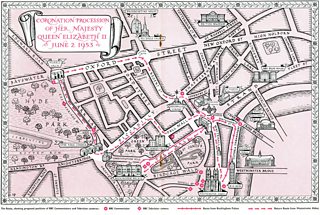 For the coverage of the Coronation service, 29 microphones were placed throughout the Abbey to give a complete sound picture of the ceremony. This sound picture (free of commentary) was made available to visiting broadcasting organisations, to the BBC Television Service, to BBC recording rooms (where the audio was captured for permanent record on a set of 50 disk­ and 16 tape­recording machines), to the Ministry of Works for their public address system along the procession routes, and to the press and newsreel companies. 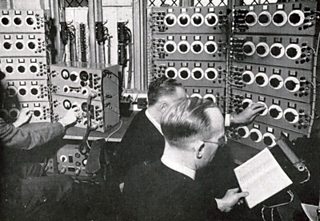 For the Television coverage, 21 cameras were placed at the five key sites: Victoria Memorial (covering Buckingham Palace), Hyde Park, Victoria Embankment, the Colonial Office, and Westminster Abbey. The Abbey temporary control room handled five cameras in total,­ two in the Triforium, one over the West Door, one on the organ screen and one in the South Transept. Each of the key sites had a camera enabled with new 'zoom' lenses, which allowed an area of the picture to be slowly enlarged, rather than the sudden effect of a lens change. One camera at Victoria Memorial was also equipped with a special 40­inch telephoto lens that allowed a close­up view of Royal Family members on the balcony of Buckingham Palace.

Here is a plan of where the various television and radio posts were to be within Westminster Abbey, for coverage of the actual Coronation ceremony: 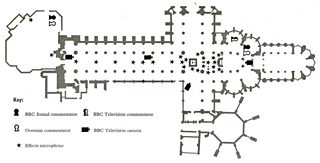 A Government ban on construction of medium-­power television transmitters was relaxed in late 1952 to allow construction of three new transmitters, providing coverage to high­population areas not served by the main transmitters. These were Pontop Pike near Newcastle ­upon ­Tyne, Glencairn near Belfast and (later) Truleigh Hill, near Brighton.

All of the BBC’s Home Service and Light Programme transmitters, 37 in total, were joined together for the main Coronation programme, which opened at 5.30am with a “Music while you wait” item, specially arranged for people arriving to line the Procession route. Television opened with an hour’s test transmission, and the actual programme began at 10.15am. The Home Service transmitters closed down at one o’clock the following morning, the Light Programme transmitters at midnight, and the television stations at shortly before midnight.

Weather on the day itself was inclement, with the wind and rain providing unwanted sound effects during the Procession commentaries. The coverage of the Processions began with a pre­arranged verbal signal ­ “The coach moves!” ­ from commentator Jean Metcalfe, and one­by­one commentators took up describing the scenes as the Royal coach passed by their vantage points. One of the highlights was hearing the voice of Charles Gardner, who was on board one of the jet aircraft involved in the fly­past, mixed into the commentary at the appropriate time.

Wynford Vaughan Thomas was one of the Victoria Memorial commentators charged with describing scenes around Buckingham Palace. When he was unable to reach the required position at the Memorial because of the crowds, he performed his evening duties standing on a box near the control room. 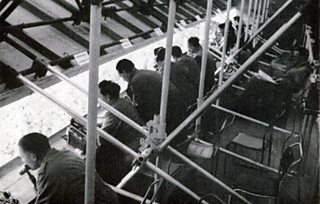 The apocryphal tale of the broadcast is of people crowded into the living rooms of neighbours and friends as there were only just over 2 million TV licences issued by early 1953 (against a population of around 42 million). In addition to these private arrangements, many television sets were arranged in church halls and other public spaces to allow those without ready access to television to see the broadcast. The licensing of these public broadcasts (normally not allowed under a regular domestic receiving licence, especially for paying audiences), is specifically referred to on the back cover of the Coronation... booklet:

“NOTE: For the benefit of local authorities wishing to test public exhibition sets the BBC’s telelvision transmitters are on the air one hour before the start of programmes on 2 June, that is to say at about 9 a.m. No objection is taken by the BBC to the re­diffusion in public of the sound and television broadcasts of the Coronation ceremony and processions.

The BBC is authorized to state that the Performing Right Society also does not object. The re­diffusion of television programmes to paying audiences is not covered by the G.P.O. £2 receiving licence but the Postmaster­General has announced that he proposes to issue a collective licence, free of charge, to cover the re­diffusion of the BBC broadcasts to paying audiences.”

One example of these public showings was at the Festival Hall where, one morning in April, 3000 tickets sold out within 54 minutes.

Although footage of the procession and ceremony exists as colour newsreel, this was recorded separately on film by Rank. There was also an experimental colour television broadcast (not by the BBC), relayed by closed ­circuit to Great Ormond Street Children’s Hospital.

The Year That Made The Day offers some insight into how many people experienced the ceremony courtesy of the BBC:

“An audience survey carried out in Great Britain shows that some eleven­and­three­quarter million adults listened to the sound broadcast of the Coronation and nearly twenty­and­a­half million saw it on television.

The BBC made use of all its own transmitting resources, but also those of other broadcasting organisations. The Canadian Broadcasting Corporation relayed the broadcast via two of their transmitters, which was also picked up extensively across the whole American Continent, and Radio Ceylon used their high­power transmitters to relay coverage across South and South­East Asia. Excluding Europe, the total number of relaying stations was approximately 2,750; in Europe the number was over 200. There were also rebroadcasts by the British Forces Network stations in Europe, the Middle East Land Forces’ transmitters and the Commonwealth Forces’ station in Japan.

The RAF flew tele-recordings (film recordings of the television broadcast) across the Atlantic to Canada in three stages throughout the day: ­ 1.30pm; 3.15pm and 6.26pm. At 4.15pm local time, the full BBC television programme was broadcast by stations in Ottowa, Toronto and Montreal. NBC and ABC in the United States also relayed this broadcast, and CBS transmitted its own copy of the tele-recording, which had come across with the RAF and then been flown on to Boston. 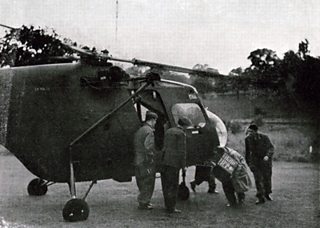 At the end of the book, several telegrams (detailed below in capital letters) and messages are reproduced, received by the BBC from the various outposts around the world responsible for rebroadcasting the transmission:

“I would like to mention that reception here was marvellously clear on the special wavelengths.” (This listener enclosed a copy of a Sao Paulo newspaper, published at 2.30pm, local time, on 2 June, on the front page of which were four radio photos of the Coronation taken from the TV screen.)

“SPLENDID RECEPTION MANY THANKS GOD SAVE THE QUEEN”

From a Petty Officer on board the British submarine Andrew, that picked up the Coronation broadcasts during her 2,500 mile underwater Atlantic crossing:

“My biggest thrill was being awakened one morning by a fanfare of trumpets. I couldn’t make out what it was at first. Then I realised we were hearing the Coronation broadcasts from the Abbey.”

The BBC announces the closure of the Digital Media Initiative - DMI