Working together to help save lives

The phrase "working together" is one I’ve heard often in my three years of mentoring and supporting journalists in Myanmar - but it doesn’t always mean much in practice, and sometimes it's used to avoid assigning blame or taking responsibility for problems!

But last year we saw the genuine and positive embodiment of the phrase among most of the 120 or so participants of Lifeline training – a course bringing together journalists, aid workers and government officials to improve their communication with people during humanitarian crises.

Myanmar is one of the most disaster-prone countries in the Asia-Pacific region, and also suffers ongoing ethnic and inter-communal conflict in various parts of the country.

Media professionals have communications skills, a platform and an audience, while governmental and non-governmental organisations are experts in disaster response. Between them they can share practical information which can help people survive - and recover from - crises.  During Lifeline training we demonstrate how they can work together so that more people can be given life-saving information and communicate their needs.

Feedback indicated that, despite some initial reservations, trainees found the experience of ‘all coming together’, a positive one. 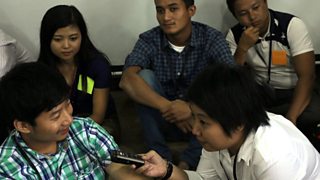 Humanitarian workers and journalists participate in Lifeline training in Myanmar

It can be hard for journalists to switch from a “news mentality”, but most of the journalist-participants recognised the value of creating Lifeline content during crises.

Our own experience suggests that audiences here are very appreciative of such programming.  In 2015, we helped the state broadcaster, MRTV, create a radio programme aimed at those affected by heavy flooding.  It was the first regularly-broadcast show of its kind in this country, and it’s still on air. A listener in Rakhine, affected by flooding, described it as ‘remarkable’ that he was able to speak to journalists and later see the interview on air. 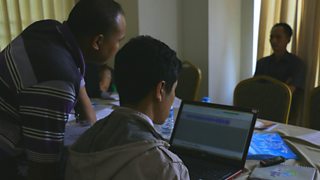 In Myanmar, radio has long been the quickest, easiest way to reach a wide audience. But the landscape is changing. More people can afford TVs, and our research suggests an estimated 84% of people nationwide have access to a mobile phone at home.  So we took this into account when choosing participants for our Lifeline training course. Just over a third worked in radio, but we also had TV journalists and those working in online media.

Peter Aung works at Democratic Voice of Burma (DVB), an independent media organisation with a strong public service remit.  Shortly after he attended Lifeline training, monsoon rain flooded many parts of the country.

Myanmar is a country in transition, where media freedom is still somewhat restricted and many in authority remain wary of the press.  But it is good to know that in the area of communication during disasters, both sides are showing a greater willingness to work together in order to save lives.

BBC Media Action is not funded by the BBC’s licence fee and depends on the generous support of donors. Help support its work.