In conversation with The Rev'd Kate Bottley 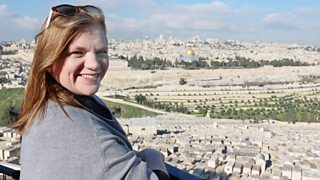 The Reverend Kate Bottley has travelled to Jerusalem for a special programme on BBC One investigating Judas Iscariot and the Easter story. We spoke to her about her experience making the programme and what inspired her to join the clergy. She also shared her thoughts on why she believes the BBC sitcom ‘Rev’ has helped to create a more realistic image of the clergy in the UK.

In the Footsteps of Judas is broadcast on Good Friday at 9am on BBC One and available on iPlayer afterwards.

Why did you want to be a vicar?

I never meant to be a vicar. That wasn’t my intention. In fact I wasn’t from a religious family at all. I didn’t intend to be a Christian. But, I fancied the vicar’s son at Church. So I went along for a snog and I came back with a dog collar. I came out with a husband too – the same chap. I went to church for the first time when I was 14, and then we started going out at 18 and we were married at 23.The rest is history.

I didn’t expect to be a vicar, but what I realised is that I am such a dreadful show off and want to be the centre of attention. Wherever I go, if I see someone at the front with a microphone I always think:  ‘OK, how do I get to do that? How do I get to be at the front?’ So, I went along to church and there was someone at the front preaching, and teaching and leading and I thought ‘Oooh, I’d like to do that. That looks like fun.’ At a deeper level, I was called to do it. There was a sense of vocation and that this is the right thing for me to do. I wasn’t a vicar to begin with – I was a teacher of RE to begin with. There was a vicar at the time who took me out for a curry one night and said ‘I think God might be calling you to be a vicar.’ It was a bit like someone finding out your secret really. The penny dropped and it all fitted together.

I thought someone would say 'no' to me at some point. You go for all of the vicar interviews and I was sure that someone would eventually say, 'Don’t be so ridiculous, you can’t be a vicar.' Nobody did. I still sometimes expect a phone call any day now when someone says to me, 'Oh, we didn’t mean you.' It’s totally imposter syndrome.

When you say things that make me laugh, there’s a bit of me that thinks 'I shouldn’t really laugh at that thing she’s said because that’s not allowed' …

Well yes. It feels like I shouldn’t laugh with a vicar. I wonder where you think that view comes from?

I think it's because we have a post-war 1950s view of the Church of England. We’ve got this sense of that vicars don’t look like us, they’re completely weird and different from us. I always think it's interesting when people say to me, 'Oh you’re a breath of fresh air, you’re not like a proper vicar.' I am a 41 year old, middle-aged, middle-class white woman who's a vicar. I’m a curve ball.

So is it a view created by media portrayal?

I think Vicar of Dibley did us a lot of favours because it created the assumption that if you’re a woman priest you would be lovely. They also assume that you’re really keen on Johnny Depp and you love chocolate - which is also probably true. They’ll always presume you’re lovely because their frame of reference is Dibley. 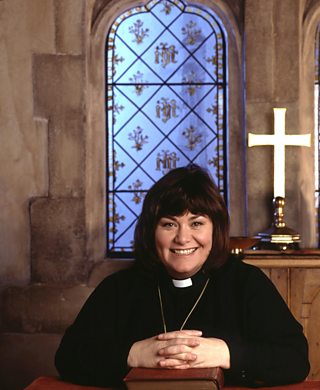 Dawn French as The Reverend Geraldine Kennedy in 'Vicar of Dibley'

But when it comes to vicars in general you’ve got all sorts of images of clergy from sitcoms for example like Dad’s Army, that probably haven’t done much good in the long term. The cultural memory of people is quite long.

Then BBC series Rev. came along – which for vicars became appointment to view television. You wouldn’t phone another vicar when Rev. was on TV. We all thought the BBC had put secret cameras in our vicarages – it was so accurate. It was so close to home. Finally, here was an accurate representation of a person of faith, of a clergy member – a bit sweary, likes a drink, gets it wrong sometimes, messes up, sometimes doubts their faith. A far more accurate image than say the pious Dad’s Army vicar. 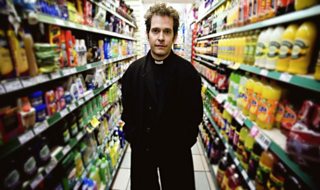 What Rev. helped illustrate was that clergy are just human beings. As clergy we’re often in difficult situations where people want us to be like them but at the same time they want us to be different, to demonstrate that sense of spirituality and that distance. It’s about being a normal person and also being the person they you need to be when you’re being their granny.

For me, what it’s about is authenticity. If the person you are is pious and holy, then you do that. But, I can only be the vicar that I can be and I can only be that vicar within the framework that God has given me.

It’s so exciting – I’d never been to Jerusalem before, so when the BBC phoned me up and asked me if I’d like to go, I think my bags were packed before I’d even put the phone down.

I think what really excited me was that Judas Iscariot is a person that nobody really looks at. it’s a bit controversial to look at Judas:  he’s a misfit and I kind of like that – he’s not quite what you expect. I wondered whether there was something about Judas that was misunderstood – now that’s not to say that what he did to Jesus was OK – but there’s that element of him where I’ve ended up thinking in the past that I quite like that he’s on the edge. I feel like that sometimes myself so I relate to him in a way.

And that feeling didn’t change in making the programme – I still feel empathy for him, which is not necessarily something that you want your Bishop to know – that you feel sorry for Judas.

You said that this was your first visit to Jerusalem. What was your experience of the city?

I was completely amazed by being in Jerusalem. I’m sure I would probably never have gone unless the BBC had taken me, so I’m very grateful for that.

The reaction I got in Jerusalem was the thing that surprised me most. Being a female priest in the UK I’ve experienced hostility, so I expected at best ambivalence in Jerusalem and at worst downright hostility, because this is a religiously conservative place,  a sensitive place, so I was very nervous wearing my dog collar, if I’m honest.

Without exception I was literally and metaphorically embraced in the street. So, I had a group of Roman Catholic pilgrims who ran across the street to talk to me. They’d never seen me on Channel 4 or heard me on BBC Radio 2 or any of the things I get up to, but what they knew was here was a woman who was a priest and they’d never met one before.  And there was a woman who grabbed my hand and put it on her head asking me to bless her there in the street. And that level of affirmation especially from Roman Catholic brothers and sisters was just phenomenal and deeply moving – I could cry about it now.

Lots of people were wanting to speak to me. On the first morning as we overlooked Jerusalem there was a guy on the side of the road selling headscarves and bits and bobs. He came over and gave me a cross and I tried to give him some money and he said to me, 'No that’s for you – because you give so much of yourself to others I wanted to give you something,' and I just thought that was phenomenal. I’d never seen him before that moment.

But it was a place that also broke my heart – because here is a place that the three main religions share a site, Jews, Christians and Muslims - one of the holiest places for those three religions and yet they literally and metaphorically miss each other in the street. You know we share a geography there we share a commonality there, even the same god some would argue, and yet Jerusalem is a place that is completely divided. And that’s really sad because if we can’t get it together there where can we get it together?

What did the Bishop think of your involvement in the programme?

I’ve got a great Bishop. He said 'Go for it.' This was quite a biggie so I thought I’d better have a chat. They’re really supportive because they acknowledge that this programme will probably be watched by more people than will be sat on pew seats next Sunday, so it’s a good thing to do. Dealing also with all those preconceived ideas that people have about vicars as well, so if you’ve got someone who people can relate to but who still believes in a man that was raised from the dead, then it’s a good thing to do.

What did you learn doing the programme?

I learned that they sell Bounty bars on the Via Dolorosa.

I learned that I know more Greek than I thought I could speak.

I learned that a smile is universal language  - that you don’t need to explain yourself when you can grin at a nun and she grins back – it’s brilliant.

I learned that people are kind and patient and lovely most of the time.

I learned don’t cross a nun she’ll elbow you out of the way to get to the church of the Holy Sepulchre.

I learned that most people feel sorry for Judas – it doesn’t matter who you ask whether it’s the Bishop or the woman in the local supermarket. When I told people I was making a documentary about Judas they sort of looked both ways to make sure nobody was listening, and then leaned in and said: “I actually feel a bit sorry for Judas” -  it’s like the thing you’re not allowed to say out loud.

This blog post is a transcription of a conversation between The Rev'd Kate Bottley and Jon Jacob on Tuesday 22 March 2016.

Jon Jacob is Editor, About the BBC Blog and website