The Left Behind: creating a factual drama 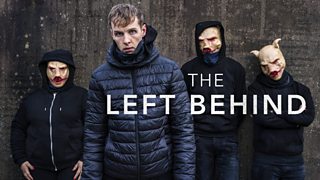 The Left Behind is a factual drama that tells the story of a young man who gets drawn into a far right hate crime.

It comes from the producers of multi-award winning Killed By My Debt. With The Left Behind on BBC Three today, we spoke to writer Alan Harris and Director Joseph Bullman about what goes into creating a factual drama.

What research did you do before you started filming The Left Behind?

Joseph Bullman: The Left Behind is different to Killed By My Debt, which I also worked on, because we aren’t telling a real-life story. We’re telling a composite of stories from all around the country and putting them into a group of characters.

Alan and I spoke to experts who have spent years studying Far Right sympathisers - including Prof Hilary Pilkington who embedded with the EDL for 3 years and whose groundbreaking ethnographic study Loud And Proud features powerful verbatim testimony. We also spoke to people in Wales who were working to de-radicalise these young people.

Alan Harris: Yeah, there wasn’t one direct influence. We had to take inspiration where we could find it. We read books like The Rise Of The Right: English Nationalism And The Transformation Of Working Class Politics by Winlow, Hall & Treadwell - a brilliant book, which also featured incredible verbatim testimony from communities they had spent time with - as well as case studies from organisations such as Hope Not Hate. We visited food banks and spent time talking to Shelter in Wales to understand the housing crisis, which is incredible and very acute.

As Joe said, we also went into communities that are sometimes described as having been left behind. We went to a few different places - including a place called Ely, which is a working-class suburb of Cardiff. We spoke to people there, not just those involved with the Right, but all members of the community to make the film as real as possible.

JB: That’s the thing. The people of Ely are absolutely lovely. 99% of them want to go to work, provide for their families and get on with their lives. It’s really a tiny percentage of people who resort to Far Right ideas, which isn’t the impression that people generally get.

What were the challenges of creating this story? 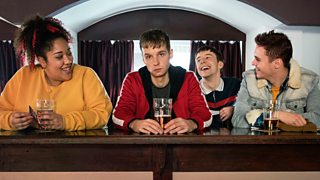 AH: The challenge for me, as a writer, was trying to reflect the warmth of the people we met. People from these communities are generally demonised. It’s much easier for us as a society to dismiss them if they’re the villains. So what I kept coming back to was reflecting real people, with their warts and their warmth.

The other challenge was to stay true to the research but also make a drama, not a documentary. I’m a drama writer, not a documentary filmmaker or True Crime writer, so I did have to treat this like a drama. For me, the research is to get to the first draft, it helped me to create the parameters and the world the characters live in and take the story where it needed to go.

JB: I totally agree with Alan. Reflecting the warmth was key. I remember on set, an actor came to me and said, ‘OK, so I know this characters a bad person…’ and I said, ‘No, not a bad person. No one is wholly good or bad.’ We wanted them to get into the mindset of nice lads and lasses who made bad decisions, not the villains we see in the news every day.

To be honest, the biggest challenge is getting working class stories made. In that case, BBC Three is a beacon, they’ve been incredibly brave in bringing stories that you don’t see elsewhere to young audiences.

Why did you choose this story?

JB: The Far Right are on the march and hate crimes are on the rise. We see it every day, but what we don’t talk about is the lack of a Far Right contingent in places like Hampstead and Kingston upon Thames. These groups are more often than not in post-industrial, left behind, working-class communities. Why aren’t we looking at the reasons why?

Almost all of the people we spoke to worked in the gig economy and didn’t have proper housing. They’re living day-to-day, waiting for a call from their boss with a shift. There’s no narrative to their lives and that’s a perfect stalking ground for the Far Right, preying on people who feel excluded.

AH: Totally. We talk about left behind, but really what we’re talking about is people being left out. The status quo and globalisation has done nothing for them and when they ask questions they get no answers, people just don’t care. We, as a society, have tried to ignore the problems and they’re coming home to roost.

We also wanted to see people on screen that we don’t normally get to see and hear from perspectives we don’t get to hear from.

JB: These communities aren’t just in South Wales - where The Left Behind is set - they are all over the country. As Alan just said, we can’t continue to ignore it. We’ve made a film that is challenging but we hope on that opens up a debate.

How did you start your careers? 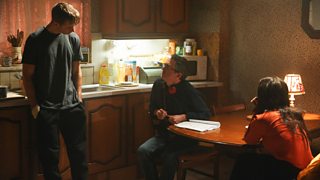 AH: There used to be a theatre in Wales that accepted unsolicited scripts and would even give you feedback. I’d send them script after script and eventually they liked one and I got my first professional production in 2007.

From there it started to snowball, really. I’ve written a number of plays and radio dramas for BBC Radio 4. I also got onto the BBC TV Drama Writers programme, which is different to other programmes because they pay you for your script. You also get paired with independent production companies. It was a really good experience.

I started working on The Left Behind because Aysha Rafaele (Executive Producer of the film) and Joe came to one of my plays in Edinburgh. Aysha got in touch with me and we met up to talk about potential projects and here I am!

I think the main piece of advice for writers is to remember that you need to keep going, keep writing and sending your work out. Also, it doesn’t matter how long you’ve been doing it either, you still spend a lot of your time worrying about rejection.

JB: My background is in documentary filmmaking. I came straight out of university and started writing to non-fiction authors asking them if they needed a researcher. Tom Mangold got back to me and I worked with him for a while and he invited me to Panorama with him. I then started working with them on current affairs stories.

I then got interested in making my own documentary films. When I started, I decided not to take every job, which meant money could be tight while I was waiting for my projects to be commissioned but also meant people started to know me for specific work.

After a while, I started to get real people to perform in my documentaries - for example in  The Seven Sins Of England, I got real people to deliver passages from 16th and 17th century texts, which had parallels with their present day lives. It was a thrilling experience and stretched me as filmmaker and I really felt I could do more with performance.

And working with some amazing actors has been one of the best experiences of moving into drama directing. When I pitched the idea for Killed By My Debt and it got commissioned It was such a privilege to have the chance to do something I’d never done before - let alone for it to be so well received!

The Left Behind is available on BBC Three from Wednesday 10 July.