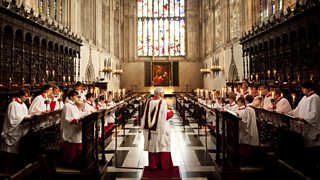 The Choir of King's College, Cambridge prepare for the service, photo by Benjamin Ealovega

Simon Vivian, is the person responsible for the international live broadcast on Christmas Eve of A Festival of Nine Lessons and Carols from the Chapel of King’s College, Cambridge on BBC Radio 4 and the BBC World Service. Here, he reflects on the role of the radio producer and explains how this world famous service makes it to air.

It’s a magical moment which, for so many decades now, has marked the beginning of the Christmas celebrations for millions around the world. As a small red light begins to flash, a lone chorister steps forward in the hushed and expectant candlelit Chapel of King’s College, Cambridge and begins singing the opening solo verse of Once in Royal David’s City. As it soars from the west end of the Chapel, high over the congregation’s heads, the innocence and beauty of the angelic unaccompanied voice takes us immediately away from the hustle and bustle of the world outside.

And in a state-of-the-art BBC digital sound truck parked outside, sits the radio producer, the sound balancer and a small team of audio engineers. They have the switch to operate that red light inside the Chapel which indicates when the service should begin.

For the past two years, it’s been my privilege to be the radio producer of A Festival of Nine Lessons and Carols (not to be confused with Carols from King’s, the similar television sequence of Christmas carols and readings recorded a fortnight or so before). And I will be there again in Cambridge this Christmas Eve to ensure that those millions listening live, in so many different time zones – on BBC Radio 4, the BBC World Service, and distributed to many other radio stations around the world - can “hear again the message of the angels”.

When I arrive in Cambridge each year on December 23rd for the first sound-check with the Choir alone, my quartet of BBC Outside Broadcast colleagues will have already rigged the Chapel, laying long lengths of cable to and from the sound truck, lugging heavy equipment up the Chapel’s spiral staircase into the roof space, and slowly and carefully lowering 30 or so microphones through holes in the medieval fan vaulting.

During the rehearsals, I’m listening from the sound truck. As we work towards getting a good sound balance, we bear in mind that, once the space is full with congregation, the sound of the Chapel’s echo dries up considerably. Throughout it all, my intention as the radio producer is not only to reflect as closely as possible the beautifully crafted sounds to be heard inside the Chapel but to transmit the magical atmosphere of the live service to the listener, placing them in “the best seat in the house”!

Before the end of the rehearsal on Christmas Eve morning comes the all-important audition to find the chorister who will be asked to step forward and sing the solo first verse of Once in Royal David’s City at the very beginning of the service.

Stephen Cleobury, the Director of Music at King’s College, asks four or five choristers to audition.  Of course, he has a sense of who he may pick but, after the choristers have headed off to lunch, he is keen to hear from me as to how each of the choristers sounded over the speakers in the sound truck before making his decision. The name of the chosen chorister will be kept under wraps however - even from the chorister himself to prevent undue nerves – until seconds before the service begins.

As the 3 o’clock news draws to a close on BBC Radio 4, the Continuity Announcer in Broadcasting House begins reading the introduction to the service. As this proceeds, we begin to flash the red light – “Get ready”. Stephen Cleobury points to a single chorister – the chosen voice who will begin the Christmas celebrations of millions. Unheard in the Chapel, the Continuity Announcer is coming to an end and the red light goes off – “They’re about to come to us”. The chorister steps forward and clears his throat. And then comes the moment. The red light is switched on - and remains on. The world is listening. And a serene sound fills the space, floating through the Chapel and over the airwaves.

In the sound truck, we are subtly tweaking this fader and turning that dial, very aware of the great significance of the moment. For the next hour and a half we will be focused on the music and readings, and on the rehearsal notes we’ve scribbled down over the past day and a half, attempting to put into practice all that has been carefully rehearsed. But, with the listeners, we will also take the opportunity to marvel at the beauty and magic of this live annual service – cherished by so many millions and one of the jewels in the crown of radio broadcasting.

Simon Vivian is a radio producer in the BBC’s Religion & Ethics department.

Around the world in 25.5 hours