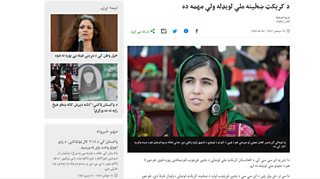 Global Audience Measure figures for 2018 have been reassuring, to say the least.

If we go back to the 1990s, the BBC was the only source of credible news and information for Afghans, in Afghanistan and across the region. Today, there are lots of sources of international information in Afghanistan. But it is to us, the BBC, that people still come to get confirmation of what they’re hearing or seeing elsewhere.

Our audience in Afghanistan is an audience of need, and they rely on us. For audiences there, the BBC continues to be one of the main windows to the rest of the world.

Back in 2014, when I became the Afghan service editor, I had just come back from an attachment in Kabul with a good picture of other media’s output, and knew that there was a lack of original and well-investigated content.

This is why we started to introduce original content from BBC Radio 4 and the World Service to our output, slots such as Witness, The Why Factor and From Our Own Correspondent, that we adapt and translate into both Pashto and Dari. Three times a week we broadcast an audiobook in both languages, similar to the format of BBC Radio 4’s Book at Bedtime.

In 2015, we expanded our daily radio output in Pashto and Dari with the addition of three live broadcasts: one-hour audience-participation programmes; Word of the Day in the morning and News and Views in the evening; and Global Newsbeat bulletins.

In the morning people call in with local area issues and how they resolved them, or they raise the matter on air and other callers around the country phone in with their solutions. In the evening, we give the audience the chance to tell us what they make of the news, and how we report it.

People from all walks of life, even some opposition like Taliban members, are calling in – for example, when the top news story was about torture, there were ex-prisoners ringing up who’d been in Guantanamo Bay, or Bagram, telling us their stories.

When a woman was killed by a mob and set on fire in Kabul after being falsely accused of burning the Koran, some people who phoned up the programme were furious, saying that it was a crime and horribly cruel, but other callers said that what happened was right - she had burned the Koran, so she got burned.

We produce a daily short television bulletin aired on our partner TV station in Afghanistan, Shamshad TV, as well as our digital platforms. Launched in 2014 as a 15-minute programme, the bulletin enjoyed great success with Shamshad TV’s audience, so in 2016 our partners were happy to move the extended, half-hour version of the programme to an even more prominent evening slot.

Early in 2018 we started the series of children’s bedtime stories in Pashto. Starting as a ten-part weekly series, this programme, too, has been extended – again, following an amazing welcome from the TV and digital audiences.

We work together with our colleagues at BBC News Persian, BBC News Uzbek, and BBC Media Action whose TV and radio programmes for Afghanistan have a weekly audience of 1.1m people. The total audience in Afghanistan for BBC News is now 11.8 million, up 80% from four years ago.

Altogether, three out of five Afghan adults are among our audience.

The BBC is unrivalled in Afghanistan in that it’s perceived as the most reliable, trustworthy and independent news source. The BBC also leads on how we are seen as helping people to understand the news and informing their world view.

Leading the way on transparency and fair pay