BBC Children's is a promise you can count on

I’ve been Director of BBC Children’s for the last 4 months. As far as I’m concerned, it’s the best job there is. I’ve been completely awe-inspired by the shared sense of commitment, aspiration and vocation that exists within children’s media industry. Plenty of time to be really excited by the possibilities that are open to us.

The BBC as a whole – Children’s included - is at a really important junction right now. We’re coming up to the BBC’s charter renewal period – where we re-negotiate the Charter with the Government about what we’ll deliver for our audiences and how we’ll fund our service.

It happens every 10 years. It’s always a big deal, and there are always huge changes to take account of because it’s such a long time. Ten years ago, we’d never heard the words iPhone, or BBC iPlayer. And in the 2007 charter, the word internet was only mentioned once and the word mobile wasn’t mentioned at all.

This time we’re all in the grip of the digital revolution. It’s fundamental, fast moving and at the heart of our audience more than any other. And BBC Children’s is on its toes and ready to keep running with it.

For a while now, we’ve all been working hard to make the most of the opportunities it brings. How to give this whole new generation of kids – who were truly born digital and for whom touchscreen and apps seem as natural as the ground they walk on– what they want from their media. And what they deserve from us, the BBC.

You’ve seen the apps, the websites, games and the BBC iPlayer content. BBC Children’s was the first part of the BBC to offer connected, multi-platform programmes and content across our TV and online platforms. And now it’s time to take the next step on this journey and to do so decisively, and with a really clear direction that we can share with you.

As the largest commissioner of UK-originated kids programmes, we have an important job to do in helping to set that direction – and to be clear that, like everyone else in the media industry, BBC Children’s will be doing things differently in the future. There’s no doubt about that – it’s a necessity because we want to give our viewers the best.

As well as focusing on some of the things we’re looking to do differently, I want to be clear about the things that will be the same as always: the big BBC promises you can count on. Because some things are just too important to change.

One of these is the BBC’s strong, ongoing commitment to children’s media - which remains as solid and vital as it’s ever been. Whatever happens in charter negotiations, we are right up there - one of the BBC’s main priorities now is to improve our offer for younger audiences - and this won’t change.

BBC Children’s is a great British institution, as iconic as Big Ben and just as much a part of our national consciousness. Pioneering, unforgettable and a part of our rich heritage that’s shaped our lives – with content that’s utterly amazing.

The UK’s only public service broadcaster. We’re here to inform, educate, entertain and inspire all of the 9.3m children aged 0-12 in the UK today with high quality, U-rated brain food. And this ethos sets an unmistakable BBC Children’s tone which, like the proverbial stick of rock, runs through everything we do – although a lot more nourishing for the consumer.

We offer children, their parents and anyone else who wants to engage with us the very best multi-genre, UK-originated TV, radio, games and apps. Content that’s rooted in the real lives of British families and the communities they live in, and reflects them back to children in all their diverse and technicolour glory.

That’s another thing that won’t change. 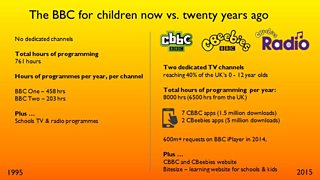 It’s a real joy to spend a couple of minutes reflecting on this because I’m incredibly proud of what we do. We’re a world leader in our field and there’s nothing else like us. That might sound boastful and terribly un-British - but I say it partly because I’m the new kid on the block and so I’m definitely not claiming credit for myself. And let’s face it, would you expect me to say anything else?

Only on the BBC can you find:

Of course, we don’t do it by ourselves. What you see and hear on BBC TV and online, made especially for the UK’s children, is a result of the vibrant, creative and passionate partners, independent production companies, in-house production teams and talent we work with and who help bring this full service, multi-genre content into homes across the country.

This brings me to another one of those big BBC promises about things that won’t change. Only at the BBC do we cover all genres – news, sport, factual, entertainment, drama, comedy and live action. And that’s what you’ll continue to see broadcast on our two channels.

We’re always planning new ways to connect with our audience because their habits are changing and they, quite rightly, demand and expect this of us.

Since April, we’ve been working on our big digital plan for children. It’s a piece of work that asks the really important questions - what do kids want from their media and why? And how can we, the BBC, best meet the needs of kids who were born digital?

More than ever before, young audiences’ viewing and listening habits are changing in front of our eyes – the rate is astonishing. And the information we have paints an incredibly complex picture of consumption - arguably more so than any other group of media consumers.

The overall message is that kids love the choice, control and options that having tablets, smartphones and second screens gives them. It also tells us that our response has to be incredibly sophisticated and diverse.

But what will this sophisticated response look like? We’re still looking at this million dollar question and we don’t have all the answers yet. But we do know that, from now on, BBC Children’s will be ‘digital first’.

This means that we’re looking through a different lens when we commission and design content for kids. Rather than designing content primarily for that big box in the corner – and basing our digital content around that (as has mostly happened in the past) - we are designing an overall ‘offer’ with a wider range of platforms in mind, that gives us more flexibility.

Just like now, it will be made up of ‘long-form’, short-form, games, apps, web content – and it’s worth making clear that, when we talk about digital content and platforms, we include our long-form TV shows and 2 digital channels in that. But over time, we expect the balance between those elements to shift depending on what kids want – for example, we are looking to do more short form right now and are thinking about the best way to do that as part of our wider range of content.

In a nutshell, there are a range of places where kids want to find us - and we want to be on as many appropriate platforms as we can. And that’s our direction.

So we are gearing up for change and already making adjustments to our structures and teams – but the pace of this change will depend on two things – what resources we have, and what kids want.

I already mentioned that the BBC Charter is up for renewal in 2017. We know we all continue to be in a position where we have to tighten our belts and the nuts and bolts of what we do will depend very much on that already in BBC Children’s we spend 94p in the pound on content and by the end of this year that will be 95p – that’s impressive by anyone standards.

And we shouldn’t forget that there are many vocal detractors of the BBC who will take any opportunity to make themselves heard about why we shouldn’t exist.

So if you love us, now would be a good time to start championing us. I’m unashamed about this – I want everyone to take note of our recent campaign asking you to love us with that heart icon you can find on the i-player. We need you to show us that you care and want us to be here in the next 20 or 30 years.
But as for our vision, commitment and ethos for Children’s in the next charter – they remain clear and steadfast.

Lots of things are still to be decided – but I hope you have an idea of the direction we’re going in. And I’m pleased to say there are lots of exciting things happening in the shorter term that we can just get on with – to give kids a stronger voice and put them even further at the heart of everything we do, so that BBC Children’s is for kids and by kids.

BBC Children’s loves serving British kids in this way – we do it and will continue to do it with a passion that burns as brightly today as it ever has.