A Year of Song and Dance on the BBC

A couple of weeks ago, Jon Jacob attended the BBC's Year of Song and Dance press launch at Sadlers Wells Theatre. There he was introduced to a new art form, came close to a couple of celebrities and met a hero. Not bad for a morning's work.

Like many people, I have recurring dreams, two of which are not very nice. There's the one where I stand accused for a murder I didn't commit because of a body discovered in a shallow grave underneath my patio (1). The other is where I sit my A-Level English Literature exam and realise I hadn't turned up to any of the lessons.

The good recurring dream is the one about returning to university to re-study music and history. That dream is the mental equivalent of a warm bath. I want it to go on and on. And usually, when I wake from it, I wonder whether it might just happen in real life.  Those who know me well will concur, I'm a tiresome dreamer.

If I were to go back to university and pay money to study the same degree again, I'd be more picky second time around. I'd start looking for second year accommodation earlier in the first year. I'd take a little more time over my Schenkarian analysis. And I'd insist on drawing up the list of lecturers I'd want - a sort of champions league of lecturers teaching the music history course to rival all of the music colleges. I'd wager a great many broadcasters would be on that list and Neil Brand would be top of it. Neil would be the one I'd drag myself out of bed on a windy Wednesday morning in Morecambe Bay to make the hour long bus journey to campus for his 9am lecture. (2) 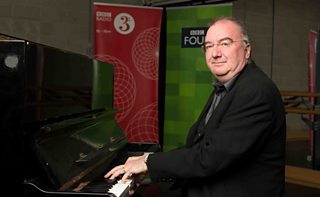 The very lovely Neil Brand pictured at the Year of Song and Dance press launch.

Neil is presenting his second series of annotated documentaries about the music which fires him up on BBC Four at the moment. The third and final episode goes out later this week. His is a compelling presentation style. He takes a thing we're all of us (usually) familiar with and with a soft voice, a wry smile and a beautifully sculpted sentence, forces us to listen to it in an entirely different way. In an instant, the familiar becomes utterly entrancing. And when lecturers command your attention in that way, they could tell you the moon was made of artificial bath sponge and you'd believe him purely because he told you so.

In my slightly odd way, this shameful gush (3) is backed up by evidence. I first saw Neil introduce the Sound of Cinema series as part of the Radio 3/BBC Four collaboration showcasing film music a year or so ago. In a darkened BFI cinema, Neil took the opening sequence of the Ipcress File and explained how John Barry's score reinforced the alluring sophistication of Michael Caine's youthful spy in 1960s London. Amongst the grimness of the setting, Caine shone like a beacon of style. So too, Barry's music. When I watched the Ipcress File on TV over New Year (part of BBC Four's season of spy films for the holiday season) it was Neil's presentation I couldn't get out of my head. That Mr Brand has got a bit of a talent there.

"Were you a lecturer at University?" I asked him as he left the press event launching the Song and Dance year at Sadlers Wells a couple of weeks ago. "No," he replied, "I did stand-up at Edinburgh." I marvelled, gushed and almost certainly embarrassed myself, praising him on a similar presentation he'd done during the event half an hour before. He thanked me, then asked me if I thought it went alright. I said it did. We then agreed to continue retweeting one another's tweets. That's how it works in the social media world, I'm slowly beginning to realise.

This post isn't a love-fest for Neil Brand. Rather's Neil's programme and his appearance at the Song and Dance press launch helps flag up something a little special and unorthodox about some press events at the BBC. First and foremost they're designed for journos, bloggos and any other interested parties to pen something which draws the readers eye and pulls in - one hopes - more viewers and listeners. But, the press event I attended at Sadlers Wells did something a little different. It acted as the equivalent of an introductory lecture for a course module that didn't originally seduce me to sign-up for the course but did, unexpectedly, pique my interest nonetheless.

I've only ever been to Sadlers Wells twice in my life. The first was - as it happens - 30 years ago nearly to the day (4), when me and some school associates attended a matinee of a new stage production of Charlie and the Chocolate Factory. Me and then best pal Marcel spent the entire journey from Suffolk incredibly excited about the prospect of seeing 'Pure Imagination' on stage, and spent the entire journey back whining about how the stage show wasn't anything like the film. We had no idea about rights and the limitations of stagecraft. The second time I was there was to attended a performance by the Rambert Dance Company. Dance was new to me. Weird. Impenetrable. Intimidating. With no script, I feared I wouldn't be able to comment on anything but the physique of the dancers. As it happens, I was pretty much right.

Yet, the press event set those fears to rest. In the Linbury Dance studio, two lean moustachiod dancers nodded modestly as Tony Hall introduced them to the assembled press. Some eery music was cued in. Then something magical occured in front of us. Two people completely unknown to us were without warning communicating directly in an incredibly intimate space. Forty people watched in silence as two human beings started doing things with their bodies most of us don't see in real life. Dance - modern dance with all its fascinating twists, turns and question-posing contortions - suddenly came alive. Perhaps it shouldn't surprise me particularly, but that moment, being that close to real-life dancers, the art form momentarily came alive for me.

Us scribbling crowd, awwed and ahhed when Dame Kiri stepped up in her dazzling bright orange knee-length jacket. She talks about her role as Patron of BBC Cardiff Singer of the World - the competition returns this summer as part of a season celebrating the Classical Voice across BBC radio and TV – but my attention seems more on her outfit. Similarly, Darcey Bussell's appearance reminded me that even in a media environment I still go a little weak at the knees when I see a celebrity. Some things never change. I very much hope they never do.

What that event achieved was something which perhaps goes overlooked. It introduced something to me (at least) which I'd never thought I'd be interested in. I want to know more about dance. I want to see more dance. I want to understand how narrative is achieved through silent moves. What is the language used? And of its art-form counterpart, song, what history have I missed over the years about the technology we've all of us taken for granted in the production of the music which forms a soundtrack to our lives? How did recording technology intersect broadcasting innovation and how did that impact on the BBC?

Such things make that recurring dream less fanciful and more like a long-term post-BBC goal. Will the year of Song and Dance at the BBC unearth some things unstudied which need greater personal investigation?

(1) Last year we installed decking over the patio in our garden.

(2) I'm not kidding. This bit is actually true. I lived in Morecambe Bay and Lancaster University music department scheduled a two hour music history lecture on a Wednesday morning at 9am.

(4) I've checked in my diaries from 30 years ago - this is confirmed as true and not made up.

Jon Jacob is Editor, About the BBC Blog and website

BBC Birmingham is getting bigger