A review into BBC R&D activity

In the BBC’s recent Charter agreement with the UK Government, we agreed with the Department for Digital, Culture, Media and Sport (DCMS) to undertake and publish a review of our Research & Development (R&D) activity.

The review is an exhaustive assessment of the work our department has done over the last Charter period (2007 – 2016), including a cost-benefit analysis, a qualitative assessment of our successes, and consideration of future objectives. Today we are publishing a BBC report summarising those three pieces of work here and the full, independent, cost-benefit analysis here. 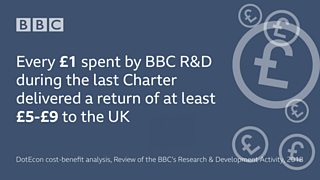 The review concludes that BBC R&D delivered significant value to the BBC, audiences, the creative community, the wider industry and the UK economy. Its cost-benefit analysis conservatively estimates that every pound spent by BBC R&D delivered a return of £5 - £9 to the UK.

This analysis takes a range of factors into consideration, including economic benefits and efficiencies delivered to the BBC, audiences benefitting from new or improved services, and other factors like patents and technology standards that benefit the industry and broader society.

As I say, it’s an exhaustive review so I want to provide a snapshot for anybody interested in learning more about our work in this post. If that whets your appetite, I encourage you to read the full report and there’s plenty more on our website and blog too, where we publish regular updates on our projects. 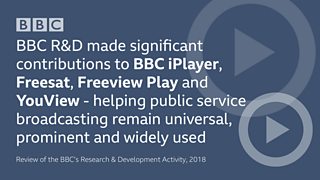 What BBC R&D delivered for UK audiences and wider society

Our most immediate and high-profile contribution was to BBC iPlayer. We had helped the BBC take its first steps online in 1994 – soon after the invention of the World Wide Web – and continued to help set the BBC’s direction and strategy.   Our insights, including trials of new forms of content delivery like online streaming, were critical to iPlayer’s success after its launch in 2007.  The work has continued to help make BBC iPlayer more widely available, particularly integrating it into the wide range of TV platforms, which is now one of the most popular ways to enjoy programmes on BBC iPlayer.

Improving picture quality was a major focus and we helped ensure that free-to-air terrestrial TV viewers were not left behind by the move to HDTV. BBC R&D led an international committee developing a standard (DVB-T2) that was more efficient and resilient than its predecessor. We believe R&D’s contribution helped bring forward the launch of HD on digital terrestrial TV for licence fee payers by three years. This work continues with our Ultra HD trials and inventing a form of High Dynamic Range for the broadcast and streaming industries called Hybrid Log-Gamma.

BBC R&D was also involved in the BBC’s coverage of major events, using experimental technology to provide new experiences and enhanced coverage. For example, we partnered with NHK to showcase the opening ceremony of the 2012 Olympics in Super Hi-Vision, provided 3D binaural sound for the Proms, and created a smart video player that could learn, and then recommend, content to Glastonbury fans.

Elsewhere, we helped make BBC programmes more accessible through improved subtitles, and our Piero sports graphics system allowed programmes like Match of the Day and the BBC’s Olympic coverage to highlight extra detail on-screen. This meant audiences could see the speed of a ball, how closely a player was caught by the offside trap, and how Tom Daley’s splashes compared to his rivals in 2012 for the first time.

More recently, BBC R&D developed the early prototypes for the BBC micro:bit – a small programmable device that was given freely to all Year 7 or equivalent pupils across the UK. Our department also led the BBC’s first virtual reality experiences, helping us better understand the potential of this format to deliver compelling experiences to our viewers.

Collaboration with the creative community

Collaboration has always been critical to BBC R&D fulfilling its objectives, and this will be even more important in future. The BBC will face new and different market and operating environments, with fast-paced technology change and disruption, new types of competitors and different standards that drive and shape the global media ecosystem. Last Charter we began collaborating in new spaces with new partners and in new ways.

Through initiatives like BBC Taster, Connected Studio and BBC News Labs we worked with hundreds of new partners to develop ideas, concepts and technology for BBC online. BBC Taster, where we showcase many of these experiments, made 250 projects available for audiences to try. Connected Studio engaged with over 520 companies from the creative industries, resulting in 168 collaborative projects. And BBC News Labs worked with over 50 news organisations, universities and research bodies. This will continue to be an important theme underpinning much of our work in the next Charter.

Together with the creative community we explored how Object-Based Media might shape the future of content and production. Here, all of the individual parts of a programme – like individual shots, the presenter, the subtitles, the music or soundtrack, as well as data – can be reassembled by the audience, not just the production team. There are limitless possibilities to new experiences that we, and others, could create for audiences in an Object-Based world.

Some project examples include personalised video, which adapts scenes to a person’s personality and preferences; an interactive cookery show that changes in response to your decisions; and a weather forecast that can be adapted to a user’s needs and preferences – like their location and whether the presenter should use sign language or not.

Delivering value to the wider industry and the UK

Collaboration is also important to our work with the wider broadcast and technology industries. We have played, and continue to play, a major role in global industry forums that determine standards for the World Wide Web, 5G technology, digital television and video/audio compression amongst many others.   Our staff contributed to the development of numerous industry-wide technology solutions, including broadcast and online video compression, and the many standards needed to bring High Dynamic Range pictures to screens.

We also set up a major partnership to unlock the potential of data in the media, bringing together academics, industry and colleagues from across the BBC. This long-term effort will help with the BBC’s mission to create a more personal BBC, and also help us better understand and take advantage of artificial intelligence and machine learning in broadcasting.

Other innovations start in BBC R&D and we then work with the industry to develop and ultimately adopt them. A good example is the Internet-based broadcasting system we pioneered. At the moment programmes are made using expensive and very specific production equipment, but in future the whole process could use fairly standard Internet technologies instead.

There are huge operational benefits to a system like this, such as being able to post-produce and mix programmes remotely from a web browser, meaning broadcasters could cover more events, more cost-effectively. And there are exciting creative benefits too, with the potential for more interactive, immersive and personalised content – like we have been exploring with Object-Based Media.

The Internet will continue to play an increasingly important role in the future of broadcasting, and our Internet-based approach is gaining adoption in the wider industry. A major focus over the next Charter will be to continue working closely with them to develop, test and standardise how content will be produced, stored, distributed and consumed in this new world.

We will need to manage the complex transition from traditional broadcast technology to Internet-based technology behind-the-scenes, while preserving the prominent, universal availability of public service content on-screen.

We led the initiative to move the broadcast industry from tape to digital file delivery. By successfully developing and establishing a single standard, we were able to dramatically reduce cost and complexity in the UK production industry. As a result, many global regions already have, or are looking to follow the UK’s lead.

We also developed the initial prototypes of the BBC’s in-house Content Delivery Network (CDN) - known as BIDI internally (BBC Internet Distribution Infrastructure) - which now carries a significant proportion of the media our audiences stream over the Internet. Having our own CDN - instead of relying solely on third-party networks - means we can monitor the performance of our streams more closely, make changes more quickly and easily, and manage costs more effectively. It also helps us manage the load the BBC places on the UK’s networks as streaming becomes more prevalent, as well as reducing the buffering for viewers. 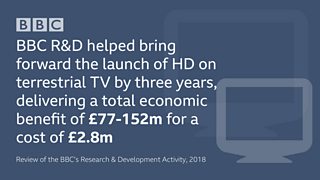 I mentioned previously that our work on free-to-air HDTV made the technology more efficient. In practice this meant that - together with video compression technologies we also helped develop - we freed up enough broadcast capacity to initially launch three HD channels without having to reduce the number of standard definition channels. We continued to optimise these technologies and were later able to incrementally launch three additional HD and two SD channels.

As you will have gathered by now, there’s a lot in this report. We are immensely proud of what we have achieved.  But we are not complacent.  Some of the most significant advances in broadcast technology began in the BBC’s R&D department and we will continue to invest in R&D that best serves the interests of our audiences, the wider broadcasting industry and the UK’s creative economy, while always providing great value for money.  In practice, that means we are willing both to take risks on things that may not work and to take the decision to stop investing in things that we don’t believe are delivering value.

There is so much more to come. What would a Blue Planet 4 look and feel like? What will it be like to talk to the BBC on smart speakers? What role can artificial intelligence or AI play in production? As this report shows, we share much of our research and insight publicly. If you want to follow our progress through the next decade as we try to answer those and other questions, you can find us on social media here and here as well as on our website.