A statue of George Orwell, commissioned and paid for by the George Orwell Memorial Fund, has been unveiled in the piazza of New Broadcasting House. Sculptor Martin Jennings talks about the process of bringing his work to fruition. 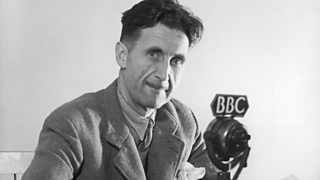 There could not be a more appropriate time to erect a statue of George Orwell in central London. An ethical and intellectual hero, he anatomised totalitarianism and the misuse of language for political ends with unequalled precision. In our own febrile times he illuminates the path for those who seek clarity, decency and honesty in public discourse.

By nature he was ill-disposed towards received wisdom and could almost be described as the patron saint of independent thought, particularly in the realm of political journalism. So there could be no better site for his statue than BBC New Broadcasting House. He worked for the BBC himself for two years during World War Two before resigning – he was never a man moulded for employment. 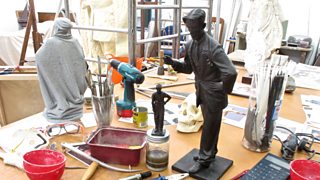 Scale model of the statue

The statue needed to express both his mental and physical angularity. Orwell was forever a member of the awkward squad and his tall bony frame was almost purpose-built to express this. Several inches over six feet tall, with cabbage-patch hair and a lamentable moustache, consumptive, built like a scarecrow and with a potting-shed wardrobe to match, his physical appearance stands as a joyful counterpoint to a monumental intellectual acuity.

He was disparaging about statues in his writing: “That seems to be a fixed rule in London: whenever you do by some chance have a decent vista, block it up with the ugliest statue you can find”. He would never have been one to occupy a plinth with ease. I’ve represented him leaning perilously forward from his own as if from an orator’s soap-box.

Orwell was so dedicated a smoker that he even continued the practice when TB presaged an early death. Smoking was so much a part of his identity that it would have been unthinkable not to represent him with a roll-up between his fingers. Nowadays smokers are ‘outsiders’ both figuratively and literally. I like to think that had Orwell still been working for the BBC today, he would have cemented this outsider status with repeated retreats for a quick gasper at the windy corner of the building where his statue will now be found.

With one pugilistic fist on his hip and the other hand jabbing his cigarette at us as we pass by, he demands that we direct our thoughts to the quotation inscribed in the wall next to him: “If liberty means anything at all, it means the right to tell people what they do not want to hear”. These words from his proposed preface to Animal Farm are a rallying cry for the idea of free speech in an open society. 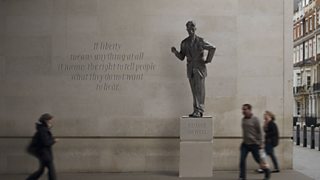 I’ve wanted to express Orwell as candid and forthright, a pointed and interrogative figure forcefully enquiring of each of us whether we too will take his stand on behalf of intellectual liberty and truth.

Martin Jennings is a sculptor and creator of the George Orwell statue.