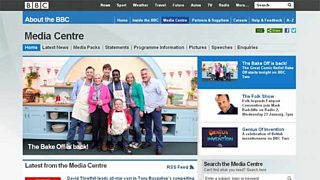 The start of a new year is always a busy time for us as the television channels and radio networks announce some of their plans for the coming 12 months.

BBC Children’s started the ball rolling with details of loads of great science-related programming for CBBC and CBeebies. There are brand new shows like Absolute Genius, hosted by the irrepressible Dick and Dom, and Fierce Earth which explores the planet’s most tempestuous geological and meteorological phenomena, plus the return of favourites like Nina And The Neurons and Octonauts, all of which feature in a CBBC and CBeebies showreel here.

On Monday, Radio 4 announced a new partnership with arts commissioning organisation Artangel which will see the station put its arts and culture offerings centre stage in 2013. Poetry features prominently and there will be a day-long celebration of the form called Seize The Day, which will feature a host of readings, old and new; whilst poet Paul Farley will be taking the nation’s poetic pulse in a new programme dedicated to contemporary verse.

Sticking with literature, BBC Two will be recreating a Regency era ball this Easter in honour of the 200th anniversary of Jane Austen’s Pride And Prejudice. Amanda Vickery and Alastair Sooke will be leading the action and the programme will be supported with a variety of online initiatives, including a host of Regency recipes on the BBC Food website. Scotch Collops anyone?

A re-imagining of a different kind will form part of BBC Four, Radio 2 and 6 Music's Golden Age Of The Album, as contemporary musicians recreate The Beatles’ Please Please Me at Abbey Road Studios over the course of 12 hours. The results will be broadcast live on Radio 2 on Monday 11 February, in a day of programming presented by Stuart Maconie and Jo Whiley.

And on Thursday (17 January) BBC One announced What Remains, a new drama written by Tony Basgallop and starring David Threlfall in his first role since playing the infamous Frank Gallagher in Channel 4’s Shameless. It’s currently filming, so no details of a transmission date yet, but I for one am really looking forward to this!

Speaking of transmission dates, when the schedules are confirmed, details of selected BBC programming ends up in a section of the site called Programme Information. These pages feature TV and radio highlights for the coming 21 days, which can be searched for by week, channel/network and day. The most recent edition features two new series: BBC Two documentary Brain Doctors and BBC Three’s People Like Us.  Please do take a look.

Ben Murray is Editor of the BBC Media Centre.

Ten things from this week #14