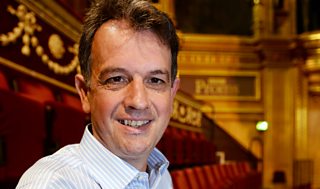 To coincide with the launch of the BBC Proms, we spoke to new Director David Pickard about the 2016 season, having 'the best job in classical music', and the festival's enduring appeal.

What was your first experience of the BBC Proms? What do you think is its enduring appeal?

I had my first experience of a classical music concert at the BBC Proms when I was 16 or 17. I went with my parents. I remember Promming quite early on. I feel as though I’ve had the complete Proms experience, from attending as a Prommer, running organisations that have appeared at the Proms, to now running the festival itself.

I think for many people it is their classical music going experience. They go for that incredible and unique atmosphere.

Is there something about that venue – the Royal Albert Hall - that draws people there, do you think? And if there is, what impact does it have on concert-going all year round?

When I was with the Orchestra of the Age of Enlightenment, we’d play a relatively obscure work at the BBC Proms and 6000 people would listen; we’d play a programme of Beethoven Sypmhonies in another venue after the Proms and there might be 600 people present. The question remains for everyone who works in classical music: where does that audience go? And I think to a certain extent there's a burden of responsibility for the BBC Proms – we have to make sure that people have a great experience at the BBC Proms and that they do move onto those other events when the Proms isn't on.

Is there something about the prospect of journeying to a concert hall that demands you commit to an unusual and sometimes longer-than-normal journey. Does an unorthodox journey make the experience at the end of it even more special?

I understand what you mean. I remember as a Prommer coming to London in the morning to attend a concert in the evening that on arrival I realised I was going to have to queue all day to get in. I recall the sense of expectation when I got there early and discovered a longer than expected queue. It left me wondering whether I’d get in or not. And that adds to the experience of being there.

I Prommed last summer – I wanted to see what it was like to Prom again. I went to the Gallery. The nice thing was that I could walk in and walk straight up the stairs. It was an eclectic mix of people. The atmosphere hadn’t changed. That’s its great appeal. I love it.

Do you think you will Prom now you’re Director of the BBC Proms?

I would love to. I absolutely loved it last year. It was interesting. The sound was incredible. And that gave me some useful insights for programming at the Proms this year.

From an arts management perspective, what’s the appeal of running the BBC Proms?

There are two daunting things I’ve heard since I took on the role of BBC Proms Director. The first is when people say “You have the best job in classical music.” The other is, “What is your vision for the Proms?”  That was interesting for me because it's showed that running the Proms is the most incredible job to have - a festival that has longevity and a continuum to it, an event which has the support of this incredible organisation behind it ...

... hearing things like that must remind you of how role is an enormous responsibility, doesn’t it?

Oh, a huge responsibility, of course. To be honest with you, I’ve had that in a lot of my jobs. It’s something you become accustomed to. But when you’re getting accustomed to that responsibility, you’ll come to realise that you’d be mad not to respect that legacy or history.

And that’s where the vision comes in for me: if you look at the origins of the Proms you find the reason why the festival existed in the first place. You don’t start a job like this and think its going to be a different festival, you have to remember that this event, as its always been, has been about bringing the best of classical music to the widest possible audience.

Why was the festival set up? Why is it still going? It’s because the initial idea is still relevant today. Obviously, what is the best music in 1895 when the festival started isn’t necessarily what some people regard the best in 2016. But, the original vision remains the same.

What do you think has sustained the Proms?

Different directors, I think. The Proms history is absolutely fascinating. From when the BBC took over the festival, to William Glock taking over as Director, and what happened after Glock. There is a fascinating narrative about how when each different person came along there was a change. The impact that television had when it was first introduced under Robert Ponsonby’s directorship was significant too. Nowadays television is incredibly important to the BBC Proms. And of course, the most recent change for us has been the impact of digital on how people enjoy the Proms:  last year in particular the catch-up figures on BBC iPlayer soared.

What does the Proms offer a visiting orchestra?

It’s a great thing for their CVs! I went to visit for the first time an extremely distinguished conductor who was in such demand he had to keep saying no to people. I was introduced to him as the Director of the Proms and the first thing he said was: “Please, please keep inviting me to the BBC Proms!” And I thought that this was extraordinary! The hardest thing about this job is the number of people I’ve had to turn down. In that respect I think that for orchestras it is really important that the Proms is part of any European or worldwide tour.

The other thing, is the audience in the Royal Albert Hall. The silence illustrates the level of listening - it's incredible. Perhaps we take for granted the contribution what that kind of intent listening has on the performance itself. There’s an interplay there between audience and performers which is so important, and that’s heightened at the BBC Proms.

How does the BBC Proms fit in with the cultural landscape of the UK?

Why are there BBC Proms concerts occurring in different venues this year?

I’m interested in exploring how we reach out to audiences across London. So as I started to think about that I started to get quite intrigued about matching music to venues in an interesting way. So for example, the Shakespeare Prom in the Sam Wanamaker Playhouse seemed like the perfect match; or the chance to hear Steve Reich’s music in a multi-storey car park in Peckham, that seemed ideal too.

These concerts are an experiment. I’m hoping it will add another dimension to the Proms.

Could this idea be extended to events in different parts of the UK?

I haven’t got that far. Of course it has crossed my mind. The only thing I’d say is that Proms in the Park does already do that, and of course the Proms is a broadcast festival – that’s its very purpose.  But it would be interesting to see if it could work.

What are your season highlights?

There are a lot! Be sure to look at the BBC Proms website or purchase the guide or app for all the details.

I want to start with the new series Proms at... I mentioned before. Purcell at the Sam Wanamaker Playhouse at Shakespeare’s Globe in Southwark, Rossini’s Petite messe Solennelle at The Chapel, Old Royal Naval College in Greenwich, the music of Steve Reich at the Bold Tendencies Multi-Storey Car Park in Peckham and the return of the Proms to the Roundhouse in Camden with music by David Sawer.

There's a series of events dedicated to the cello including ten concertos ranging from favourites of the repertoire, Elgar and Dvorak to four premieres featuring Huw Watkins new concerto written for, and performed by, his brother Paul. Soloists include Steven Isserlis, Alisa Weilerstein and Truls Mørk.

We'll be marketing Shakespeare 400 with music from Purcell to Hans Abrahamsen and Duke Ellington. There's music from Brazil across the season to celebrate the Rio Olympics including the music of Ginastera (in his centenary year) and Villa-Lobos.

Young musicians feature at the centre of the festival. The Last Night of the Proms features a commission from former BBC Inspire Young Composer winner Tom Harrold, the Proms Youth Ensemble perform side-by-side with the BBC Symphony Orchestra and 16 young singers take to the stage for Vaughan Williams’ Serenade to Music. There are two CBeebies and two Ten Pieces II Proms, as well as a weekend of youth orchestras and choirs too.

This blog post is a transcription of a conversation between David Pickard and Jon Jacob on Tuesday 5 April 2016.