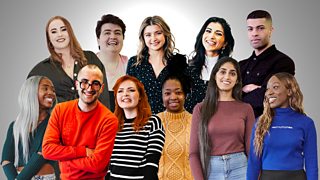 BBC Radio 1 have revealed the all-new schedule of guest presenters set to take over the airwaves across the festive period.

Great programmes aren’t just for Christmas, but this year, TV fans are in for a festive treat, as BBC iPlayer will be home to its biggest ever sack of box-sets - making sure there’s always something to watch over the festive period.

Join BBC Radio Foyle for a special evening of entertainment and celebration to mark the 40th birthday of the station live from the city’s Guildhall on Thursday 5 December from 7.30pm.

BBC Radio 4 broadcast a special election debate programme on Wednesday 4 December, with an all-female panel of politicians discussing their visions for the country in an extended edition of Woman’s Hour.

The Thirteenth Doctor is in her TARDIS, on her way back to BBC One for a thrilling ten-part series which will land on New Year’s Day 2020, with subsequent episodes airing on Sundays.

Acclaimed BBC One murder-mystery drama Shetland will return for two more series with Douglas Henshall reprising his role as DI Jimmy Perez alongside series regulars Alison O’Donnell and Steven Robertson. The series is made by Silverprint Pictures for BBC One.

The BBC has acquired David Tennant fronted drama Around The World In 80 Days from Slim film+television and Federation Entertainment where he will play literature’s greatest explorer, Phileas Fogg, in an epic adaptation of Jules Verne’s classic.

The line-up for the Top Of The Pops Christmas and New Year Specials has been revealed, as TV’s biggest pop party prepares to return to BBC One screens this festive period.

Matt Baker is stepping down from The One Show after nine years as presenter.

One man. Seven days. Gareth Thomas is doing a 500-mile cycle for Sport Relief to raise cash and deliver the BBC Sports Personality of the Year trophy to this year’s winner.

New factual commissions Trump In Tweets (w/t) and 26 Siblings And Counting cross the pond to tell powerful new stories, examining the President’s social media use and following the impact of donor-conception on families.

BBC One hosts a very special festive royal treat for viewers with A Berry Royal Christmas, produced by Shine TV.

BBC Scotland have taken the wraps off their selection of seasonal goodies to entertain audiences throughout the festivities.

BBC One launches its Christmas film for 2019, #XmasLife, running throughout the Christmas period in key junctions between programmes.

The BBC unveiled a three-part plan designed to significantly improve representation of - and opportunities for - disabled people on and off air.

The BBC is stepping up its commitment to rapidly increase BAME representation at senior levels of the organisation and develop a new generation of talented leaders.