Looking at the stars on a BBC Big Screen

Editor's Note: Stephen Morgan, Screen Manager for BBC Big Screens in Swansea and Cardiff, wrote for the About the BBC blog in December 2011. In this post he reports on the first BBC Big Screen event for 2012 in Swansea ahead of Stargazing Live.

Thousands of people across the UK braved the cold conditions and joined us at selected BBC Big Screen sites on Saturday for a sparkling BBC Stargazing experience - encouraging everyone to make the most of the night sky.

I look after the BBC Big Screen in Swansea and what a relief to see that the recent blanket of thick cloud cover finally gave way to crisp, clear, starry nights - the perfect setting, you could say, for a new series of Stargazing on BBC Two, tonight.

BBC Big Screens host hundreds of family-friendly events every year and it's always a treat to work with colleagues, to bring out-of-this-world content from the BBC, to the heart of our city centres.

People expect something special from our BBC events and there was a real appetite for building knowledge and discovering more about the mystery and majesty of the stars. As one man put it to me, "It's mind blowing. You can't get your head around the distances and the size of these objects".

It may have been daytime at our events, but on the BBC Big Screens, there was a rare opportunity to see deep space images, live from the Faulkes Telescope, Hawaii, with expert commentary from Dr Paul Roche and Fran Scott.

One of my favourites was this picture of the Sunflower Galaxy (below). 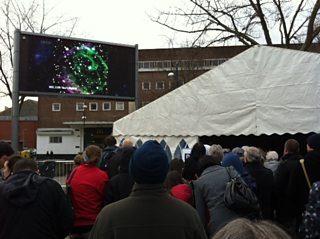 What a sight. And as you can see, everyone else was also in awe of its beauty. A young woman told me, "The screen stuff is brilliant. To see it live is something I didn't think I'd get to see". Some images were digitally enhanced.

A selection of the most intriguing questions was answered in an interactive Big Screen application. Why are stars different colours?

It may have been bitterly cold, but the weather was the last thing on people's minds. In Swansea, we had a heated marquee, equipped with its very own planetarium, where people could see the galaxy and the planets in detail. There were activities at every event. 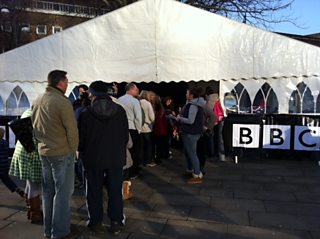 Thousands of BBC Stargazing guides were distributed to audiences and people had an opportunity to look at the latest apps available on tablet devices. At some sites, we were able to beam pictures straight from a tablet computer onto the Big Screen and identified the stars above our heads! Here's an app demonstration at Big Screen Plymouth. 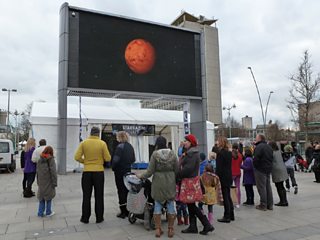 Fascinating stuff, for everyone to see and a great start for what we're hoping will be an amazing year for BBC Big Screens this year.

Round-Up from Across the BBC

The next generation of BBC journalists