Q and A with Only Connect's question editors

As the thirteenth series of quiz show Only Connect reaches its climax, we ask the people with the brains behind the hieroglyphs thirteen questions about making connections and removing vowels.

On our right: David McGaughey, one of the Question Editors of Only Connect. David used to invent, and accurately notate, complete imaginary test matches and once slept with a pen-knife in his hand for a week because he was worried he was going to be attacked by a python.

On our left: Jack Waley-Cohen, the other Question Editor of Only Connect. Jack was a contestant on the first ever episode of Only Connect, and attended the Blackpool Magicians’ Convention for 10 consecutive years, despite not being a magician. He is a regular competitor in the UK Rock Paper Scissors Championships, and once beat Pat Cash at tennis.

How did you get into writing for Only Connect?

Jack Waley-Cohen: When I found out that the show’s first Question Editor David Bodycombe was standing down, I got in touch with the production team to put my name in the hat. They appointed Alan Connor to the role, but invited David McGaughey and I to join the new breed of Senior Question Writers who were contracted to provide a certain volume of questions for each series.

We’ve worked on a wide range of other programmes over the last few years, including The Code, Decimate, Child Genius, Debatable, The Wave and Codex.

What do you think makes Only Connect have such a strong following?

David McGaughey: A combination of many things. The host, Victoria Coren Mitchell is a perfect fit for the show, and you can’t underestimate the value of that. Also, people are fascinated by the contestants taking part and how their minds work. The contestant introductions are extraordinary, as is the unwritten rule that the bizarre happenings described in them are almost never mentioned again. 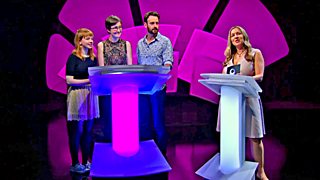 Victoria Coren Mitchell (right) has hosted the series since it began in 2008, it originally aired on BBC Four before moving to BBC Two in 2014

From our point of view, we think Only Connect fulfils, more than most other quizzes, the ideal balance of seeming to baffle - but then being surprisingly accessible. It is play-along mental exercise and it feels enormously good to get a question right. Because of the huge range of subjects, it’s quite possible that a viewer at home will know a question which completely bamboozles the teams.

I also think that Only Connect questions can contain something beautiful, and viewers can often see the effort and the artistry that’s gone into them, and they like that.

How many people write for the show?

JWC: There are 27 different credited writers for series 13, though well over half of the questions have been written by the Question Editors and the Senior Writers (6 people in total).

Victoria occasionally contributes entire questions, though more often her involvement is in some fine-tuning. She is particularly good at envisaging how a question might play out in studio and she often makes suggestions for how we can mitigate something potentially tricky cropping up, or increase the chances of something exciting happening.

We’re always amazed by the intellect behind the connections, but what makes a good question and do you always know when you’ve written a good one?

DM: The ideal connection brings together things that seem utterly random, from totally different areas, to all make sense in the end. We love crossover of subject matter in a question. But, equally, a great question can sometimes be something pretty simple about numbers, or songs, or people.

I’m not sure I actually do know when I’ve written a good question. I often get excited about a question idea I’ve had which, on closer inspection, is shown not to work at all. And sometimes a question which seems mundane can be elevated to a whole new level with a very minor tweak. That’s why it’s good to work on things together.

JWC: Only Connect is famous for being hard – really hard – but the very best questions, in my view, are the ones which everyone feels they could have got. In other words, much of the subject matter of the question is familiar, but it’s the making the connection which is the difficult bit. The clip below shows a good example, in a question from series 1, which asks what comes fourth after: Wheat, Sett, Cease…

What different considerations are there for each question?

DM: Order is of the utmost importance. It can be a little counterintuitive. Rather than putting the most “obscure” clue first, it often works better to start with one that gives less away, or is more ambiguous or mysterious. Something obscure, if recognised, can be a big giveaway.

Precise wording and punctuation can also make a huge difference e.g. if a clue says something like 2000 Olympics, Olympics: 2000, Olympics in 2000 etc. it’s surprising how those little differences can be vital

Changes to layout can come quite late, when we see what the questions are going to look like on the screens in the studio and at home.

Sometimes font size and colour can play a part too, even the number of lines that the clues are displayed on. We’re working on the experience being fair for the player and accessible for the viewer.

JWC: We talk quite a bit about the question answering “journey” – we want different clues to give little nudges here and there, we try very hard to avoid too many situations where it is “either you know it or you don’t”: that isn’t really what Only Connect is about.

How many questions get written in total to edit it down to the number used for each series?

JWC: Questions get pitched before they are written up in full form for the show. For series 13, we looked at pitches for about 1600 questions, of which about 550 were written up, and 444 were used (this is just for Round 1 and Round 2).

Is there much editing between writing the question and it appearing on screen?

JWC: The process is pretty detailed. Question writers send in their pitches; David and I review the pitches to form a shortlist; Jenny Hawker, the series Producer, reviews the shortlist; we send back the survivors from those initial reviews to the question writers who give them the full treatment (checking sources, finding supporting information etc.); these are then submitted for us to check again; then they are reviewed by the team of verifiers who triple check all the facts; questions come back from the verifiers and are assembled into sets for each show.

Then the fun really begins with our day long question meetings when David and I, along with Jenny and Chris Stuart, the Executive Producer, go through every question together, making tweaks, and sometimes rejecting questions that we’re not convinced about. Once all that is done, Victoria looks at every question and provides her thoughts.

Every question gets several final sets of eyes on it on studio day from the graphics team, the producers, the question editors, and the host.

What are the OC team’s favourite questions of all time?

DM: Well, my favourite question was written by someone else – one of our new writers – and is in this year’s final. I can’t give anything away, though it will involve some physical activity by a contestant.

As for my own questions, I’m very satisfied when I can use different areas of my knowledge to first bamboozle people, only for them to get there in the end.

Then again, I submitted a music question which was in the closing stages of the last series which had songs by acts featuring the four husbands of Patsy Kensit. That went down very well.

JWC: I have far too many favourite questions. One that I like from series 13, mainly because it lives up to the archetype of “four seemingly random clues” (but also because of it starting with one of the easiest clues in the history of Only Connect) is: 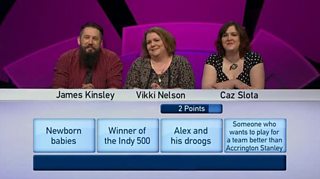 Answer: Milk drinkers. It starts with a clue that any human in the world of almost any age would know, then follows it with three quite specific references. So we’re inviting the team to get the points as soon as they know one of the other cultural references (because of how easy clue 1 is). And the last clue is quite amusing.

Stats please…how many contestants have competed over the show’s 13 series and what are the highest and lowest scores?

JWC: There have been 218 teams on in total. One team name – Geocachers -  has been used by two separate teams, several years apart.

The highest ever score is 41, achieved by the Epicureans (the next highest score is 36). The lowest ever score was 4, by the (first) Geocachers. Honestly though, 4 is nothing to be ashamed of. Most people at home are punching the air in delight - and boasting about it on Twitter - if they get a single question correct. 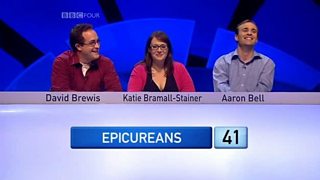 How do you decide which episode to put a question in - do you always look out for a good subject spread?

JWC: It’s an art rather than a science. We try to place less difficult questions within episodes early in the series, and the harder ones towards the end to create a difficulty gradient throughout the series. But it is important for each episode to have a bit of variation in question difficulty – though in many ways that sorts itself out by ensuring there is a wide range of subjects covered in each episode.

You want each episode to have a good balance of puzzle-type questions, fact based questions, and different types of sequences from the more straightforward to the more lateral thinking. Additionally, we try to make sure that the questions “look different” to each other within a show as well. By that we mean trying to avoid both picture questions in a show being all pictures of people, or two number questions within a round that might look quite similar on screen.

By comparison, on Round 2, the averages are:

Do you ever worry you’ll run out of new material?

DM: I believe David Bodycombe, the first Question Editor, expressed understandable concerns that we’d run out after a few series. Yet the questions keep coming. It is generally agreed that Round 2 is the hardest one to find good, original material for, but the writers keep on coming up with the goods.

As question setters, do you have to know everything about everything?

JWC: We wish. But I would say that knowing a little about a lot is very helpful in setting Only Connect questions, as it helps open up new avenues for research and finding perfect clues in unexpected places.