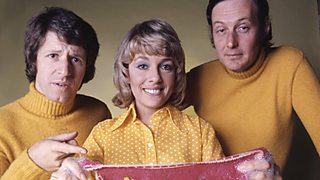 Dame Esther Rantzen presented the BBC's That’s Life! from 1973 to 1994. In this post she shares early recollections about working at the BBC and explains how she came to produce and present one of the BBC's best-loved programmes.

I'd always had my eye on the BBC as somewhere to work as my father had worked there under Lord Reith. He had been in charge of the Outside Broadcast at Windsor when Edward VIII made his abdication speech, and as Head of BBC Engineering Lines and Design my father had contributed to the development of television.

My first role at the BBC was as a studio manager for radio drama. I lasted for two and a half years until one day I was asked to fall down in order to make the sound of a skating accident. The meticulous producer had me throw myself to the ground eight times before she got the sound that she wanted.  After which, I limped back to my office and resigned.

I then did what I should have done from the beginning at the BBC and arranged to meet up with a wonderful woman called Joanna Spicer. Joanna helped many women get into the BBC workplace by matching those she’d met with new roles in the organisation. Unfortunately she couldn’t find anything that matched me so she hired me as a clerk in her Eurovision department. There I single-handedly brought broadcasting to a close, picking up the tasks my boss would normally have done when she went off sick with pneumonia. I’d seen how she filed requests for lines (communications links set up for European transmissions). So, in her absence I felt confident that I could follow her example.

On my first day in sole charge, Mrs Spicer walked into the office with a pile of telexes in her hand.  Broadcasting across Europe had come to a standstill. She said, “Can you tell me what you have been doing?”  I showed her my filing with great pride, and she said, “Very good Esther, but before you 'file' them you need to BOOK them”. I’d been with her for three weeks - possibly not the best start to a career in television.

While I was working for her I heard that Ned Sherrin needed a researcher, so I tore round and put in my letter of application. I knew a lot of the people that worked with Ned from my Oxford revue days. He’d asked them about me and when he called me in for interview at 8.30am the next morning he’d already decided to hire me. That’s how I got a job on BBC3, the BBC's satire programme which ran from 1965-1966. I continued to work on weekend late night programmes from 1965 until 1994.

After BBC3 I worked on the Saturday night consumer affairs show Braden’s Week with Bernard Braden and produced by John Lloyd.  When Bernie went to Canada, producer John Lloyd created the format for That’s Life!. When John became ill while he was working on the series, it became clear that somebody had to pick it up and run with it. That turned out to be me. I will never forget writing the first script I ever wrote when John was gravely ill. He died a couple of weeks later at the young age of 36. A tragic loss.

The general public provided a constant source of stories for That’s Life!. At its height, we received around 15,000 letters a week. Phones rang off the hook, many of which resulted in important campaigns for the programme. One worrying story came to us from the mother of a toddler who had fallen from the bottom step of a slide and fractured her skull. We investigated and discovered that no one was collecting statistics about accidents in playgrounds.  My sister, who had small children, said that in the days when children fell onto grass or mud they bounced, but when they fell onto tarmac and concrete they broke their limbs. Other countries, we discovered, had far safer surfaces, wood chips for instance, and rubberized tiles. So week after week in the studio I put down one rubberised tile next to a square of concrete and dropped plates onto them; unsurprisingly the plates shattered on the concrete and bounced off the tile. Parents up and down the country saw our report and insisted that schools and local authorities dig up the dangerous surfaces and replace them with a safer alternative.  That campaign was decades ago so in some playgrounds now these surfaces are so old that the concrete is beginning to show through. As a result those playgrounds are now regarded by some councils as unsafe and are being closed off. That's a tragedy. Some people say “Bring back That’s Life!”.

Even today, bits of That’s Life! crop up all over the place. There’s The One Show of course, for which I do street interview and occasional consumer reports.  The format for The X-Factor is similar to "Search for a Star" – the public taking part in auditions, some hilarious. Simon Cowell was on that item, he gave the winner a recording contract.  So I claim to have discovered him. Watchdog carried on the consumer protection, although in a very different way from That’s Life! - Watchdog is a programme and a very good programme, but That's Life! was a show, with a big studio audience. We had loads of jokes, talented pets, got Britain singing, handed out 'Jobsworth' hats. All British life was there, animals, vegetables and, I suppose, the occasional minerals with concrete playgrounds!

I have a particular fondness for Shepherd’s Bush Green because of That’s Life!. After filming at the Television Theatre (now the Shepherd’s Bush Empire) we’d stroll across the Green on a warm summer evening. On one particular evening our series had ended with a final search for Britain’s most extraordinary laugh. None of the participants thought there was anything peculiar about their own laugh but they all laughed at one another, so when one started it set them all off.  So we had the finalists with the strangest laughs gathered together in our hospitality room. As I walked away across Shepherd’s Bush Green there was a window open and through it I could hear a cacophony of laughter, like a jungle of sound effects; shrieks, screeches and giggles floating through the summer air - it was very, very funny.

When a TV programme works well, no one interferes. The bosses don’t know why it works, so they don’t try to change it. But with its combination of good information and great entertainment, all supplied by the public we served, That’s Life! was a very 'BBC' programme of its time. I’ve so many wonderful memories of our That’s Life! days - 21 years of them, and of the brilliant people I worked with. It's one of the things I'm really grateful for, thanks to the BBC.

Dame Esther Rantzen DBE is a broadcaster and journalist who produced and presented the BBC's That's Life! from 1973-1994

BBC Three: Where we are