The making of Attenborough and the Giant Dinosaur Virtual Reality

When we made the TV show Attenborough and the Giant Dinosaur we were presented with the opportunity to bring the biggest animal that’s ever walked our planet to life. The problem with dinosaurs is no one has ever seen one.

However, by scanning the bones of the giant titanosaur found in Patagonia we rigged, modelled and textured the gigantic CG dinosaur that featured in the programme and showed audiences this amazing creature for the very first time.

With this already produced and the programme a huge success, we saw a second opportunity.

With the new generation of virtual reality headsets it is not a massive leap to take CG animation produced for television and create a 360 experience.

So that is what we decided to do. To place you on our planet 100 million years ago alongside Sir David, closer than anyone has ever been before to this magnificent animal.

We in the BBC’s Natural History Unit believe that these types of immersive projects help us try out new and exciting ways of telling incredible stories. Working closely with BBC Taster, the BBC’s experimental platform, we have already brought natural history to life with projects including Amana, Unearthed and Big Blue Live Seal Lions and Kelp Forest.

We want the story of this dinosaur and Sir David's fascination to be told in an innovative, memorable, and shareable way. 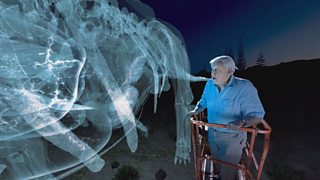 360 filming is such a new technique that there are few fixed rules. This particular demo was produced by filming Sir David against a green screen with him later composited in to the CG world. We wanted you to feel like you were there with Sir David and for the experience to be as real as possible, hence the scissor lift he’s on.

Chris, our researcher, played the role of the titanosaur. Choreographing the movement of the largest dinosaur to ever walk the earth using only a pole and a balloon. Not quite as scary as the real thing, but nonetheless effective.

Any green screen shoot is a challenge. Sir David, by his own admission, is not an actor, but he delivers a performance alongside the dinosaur that places you at the heart of the experience.

The development of this project has posed challenges from start to finish, virtual reality has so many unknowns: how to cut, whether to cut at all, which point of view to use, when does personal become personal space, does the camera move?

There are plenty of things we may consider doing differently if we were to undertake this again, we want to spark a debate about how to make 360 films as well as how amazing this creature was.

We hope it is an experience that’s one step short of time travel; that is ultimately the promise of VR, even if it is very early days.

Fortunately for us, Sir David loves pushing the limits of technology in the pursuit of new ways to deliver stories. He embraced the project from the start, so long as there was a cheese sandwich for lunch.

Selecting a song for Eurovision