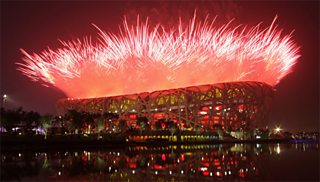 http://www.bbc.co.uk/blogs/aboutthebbc/beijing.jpg
There were, generally speaking, two schools of thought about the BBC's Beijing Olympic coverage.

The first is that it was one of the highlights of 2008 and some of the best sports coverage in recent memory. This was the clear finding of our audience research, and also of a lot of the emails, blog responses and letters we received - for which, many thanks.

The second view is that may have been the case but we were extravagant in the number of staff we sent and the amount of money we spent, and this fits into accusations of the BBC not being careful enough in the spending of the licence fee.

Well, now we have a judgement.

The BBC Trust invited the government's National Audit Office to review the coverage of six major events: Beijing, Euro 2008 and Wimbledon from BBC Sport - and The Proms, Glastonbury and Radio 1's Big Weekend from our colleagues in Audio and Music.

Please note: this is an extract. Read the rest of Roger Mosey's blog post and leave comments on his blog.

Who Do You Trust?

Lord Haw-Haw, the BBC and the Creation of a Modern Archive