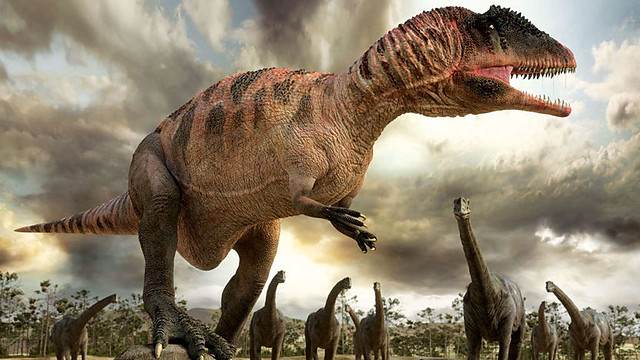 It was very early on in the production of Planet Dinosaur that the embryonic thought of a 3D version was seeded. It was when we realised that we were creating absolutely everything in the virtual world of a computer (where we had absolute control and could do anything we liked) rather than the real world (where things tend to be untidy and un predictable) that it seemed that this was a project almost tailor made for 3D. We made a very short 'proof of principle' clip as much for ourselves as for anyone else. Now, the gulf between an idea and its execution can often appear unbridgeable, many end up dashed on the rocks of the reality chasm, but we were lucky and were blessed with a commissioner who saw the potential and gathered support to take a punt and give us the materials to make our metaphorical bridge.

Almost immediately we were faced with the sheer scale and size of the challenge, it turned out to be one of the (if not the) most ambitious animated programmes ever attempted for broadcast TV. But to work on something with the scale and ambition normally reserved for Hollywood features made it genuinely exciting.

We had a team of 60 animators, compositors, modellers and background artists working on the project. Animation is extraordinarily labour intensive; it's one of the commonly held myths that, because it's made in a computer, the computer does all the work. Another aspect of 3D is that the detail required is considerably greater than that which can pass off in 2D; so the details of the animals and the backgrounds need that much more work. Every facet of the digital world had to be created in forensic detail; from the largest dinosaur to the smallest fern, all have to stand up to the scrutiny of this new form of television broadcast. Trees, plants and rocks had to be researched, analysed and modelled by the animators to give each environment the character and validity needed to produce a properly visceral experience.

The learning curve for what works and doesn't work in 3D was also a steep one, for instance the dynamic, documentary style of camerawork, and the quick cutting, so essential for the immersive impact of the original series, came with its own technical challenges. Fortunately, because we were making it in a computer, we could test, control and tweak the images, and to this end a specialist team of stereographers hand crafted individual frames and sequences to ensure that the 3D experience has maximum impact while leaving the audience fully immersed, without feeling queasy. The big difference for us, was having the 2D series which we had already made for BBC1 to work from. Thinking about 2D and 3D together is a pragmatic way of sweating your assets. It's something Hollywood has been doing for a while, and whilst TV is a different beast of course, the principle means you can do quite ambitious things in a much more cost effective way.

Ultimately what we have produced is, I believe, a thrilling journey into a lost world, an opportunity to properly experience these incredible animals in all their magnificent wonder. Have a look this Sunday 19th August at 17:35 on the BBC HD Channel or on Monday 27th August (Bank Holiday) at 15.40, when it is on again. It will also be available for catch-up in 3D via BBC iPlayer More information about how you can watch BBC's 3D programmes can be found on the BBC's FAQ website.

I'm really excited about this, and hope you enjoy it too. I would love to hear your thoughts below.