Different ways to listen and watch the BBC's Olympics 2012 coverage

Wimbledon may be over, but the time for strawberries and cream in the BBC Distribution office is short. I wrote in May about how we were working on delivering to you the BBC's greatest year of broadcasting and I wanted to let you know how our final preparations are going.

I think there are a few areas where you may find an update useful:

I've also written a separate blog on how to make sure that you are still recording your favourite shows through any regular recordings you've set up, because some of the BBC's most popular programmes on BBC One move to a new temporary home on BBC Two to make space for Olympics coverage.

We are making great progress with getting 24 high definition (HD) and 24 standard definition (SD) streams onto satellite and cable platforms in time for the first Olympic event on 25 July. I know that some of you will be interested in how we are achieving this. Just for the two weeks of the Games there will be nine additional satellite transponders in use to ensure you can watch as much sport as you can handle. Three of these will carry eight SD channels each and the remaining six will carry four HD services each.

The details of these transponders can be found on the BBC's Reception Advice FAQ site. All the channels are up and working now and should be appearing in your EPG.

However, to make it as easy as possible for you to find the events you want to watch amid this vast array of choice, the BBC's teams in Salford have been working with our platform partners (Sky, Freesat and Virgin Media) to create a slick interactive application on each platform. The application will allow you to see what is coming up and help you to navigate to the right channel. The application will look something like this (depending on which platform you use). 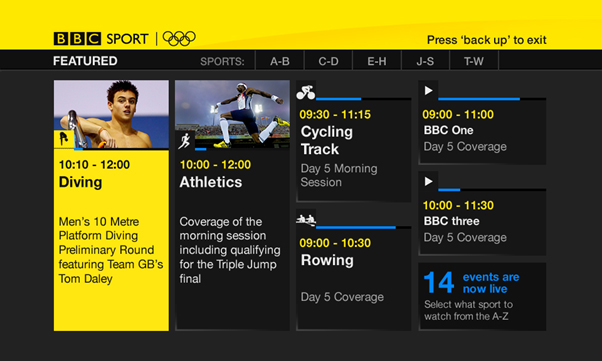 To access it, just press the red button on a BBC channel.


24 live streams via the internet on selected connected TVs

I mentioned last time that it will be possible to access the 24 streams on certain Freeview HD and Freesat HD TVs connected to the internet. This is through the BBC Sport App which enables viewers to watch Olympic sport live from every venue in the same way as you can on satellite and cable. It will be available on the following models of Freeview HD TVs:


You'll need to make sure your TV is connected to your broadband connection.

You'll need to use your TV's menu or app store to add the BBC Sport App to your TV. If you have trouble with this, the best source of advice should be your manufacturer. The BBC Sport App is also available on the Sony PlayStation 3 and on Virgin Media Tivo, and a mobile version has recently been launched for Android, iPhone and Blackberry via a shortcut app.

People with Freeview HD will be able to watch HD Olympic coverage on three TV channels across the day: BBC One HD, BBC HD and a special HD stream through the BBC Red Button.

Because of the different way that Freeview (digital terrestrial television) works, compared with digital satellite or digital cable television, there isn't enough space to broadcast the 24 streams on Freeview. However, within these capacity constraints, we've sought to do our best to give as much coverage of the Olympic Games to Freeview viewers, and in HD where possible.

Freeview HD launched in 2010 and since then 5.6 million Freeview HD TVs or digiboxes have been sold. The Freeview HD signal coverage of the UK has been rolling out with digital switchover and now covers c. 95% of UK homes.

On 19 June we turned on this new HD BBC Red Button channel which is available to anyone who can currently receive the BBC's other HD channels using a Freeview HD compatible TV or digibox. During the Olympics you will be able to access this service through the BBC Red Button when you are watching either BBC HD or BBC One HD. You will also be able to set up recordings for Olympic events through your EPG by selecting channel 304.

We expect Freeview HD receivers to have automatically discovered the new channel and added it to the EPG. If you can't find channel 304 then please try retuning your Freeview HD TV or box.

If you can't find channel 304 then please try retuning your Freeview HD TV or box.

Bringing back our BBC Red Button channel 302 on Freeview from 7pm each night is a side benefit of the work we have done to bring you BBC Three all day during the Olympics (see below). If you tune to Freeview channel 302 and can see our holding message on the screen then you are ready for a great summer of BBC Red Button sport. Otherwise please retune your digital TV or box. If you need help with re-tuning, an excellent place to go for advice is www.tvretune.co.uk which provides detailed instructions for many different makes and models of Freeview receiver. We've also made advice available via BBC Red Button page 9991. Plus we've been broadcasting some messages that "pop-up" on screen to let Freeview viewers know that they will get the additional service if they retune, and to press the blue button to get retuning advice.


Extended BBC Three on all platforms

BBC Three usually comes on air at 7 o'clock in the evening. However, during the Olympics, it will become a 24-hour channel. You shouldn't have to do anything to receive the extended BBC Three once we get to 27 July; your TV should automatically allow you to watch. To make space for BBC Three all day long on Freeview, BBC Parliament will be off-air during the Olympics, but it remains available on satellite and cable.

The BBC has also launched Radio 5live Olympics Extra on DAB. The service went live this week, most DAB receivers should have picked it up already but if yours hasn't, here is some information on how to receive it.

The best way to enjoy the BBC's coverage of the London 2012 Olympics is to watch in high definition. But because our standard definition channels sit at the top of the channel list on each platform, it's often the case that people watch in SD even though they have HD available. You may be able to watch in HD through Sky, Freesat, Virgin Media or Freeview so long as you have an HD capable digital TV and HD box if necessary. Indeed, if you have bought a large screen (32" or more) TV in the last couple of years, there's a very good chance it has Freeview HD built in, even if you don't usually use it.

All BBC channels, including the HD ones, are available subscription-free (or in the case of cable, in the basic package). To make it easier for you to find your BBC channels in HD, I've included a table below with channel numbers by platform:

NB: as well as an HD signal from one of these platforms, you will also need an HD ready TV.

* If you have a Sky HD subscription then you will receive the BBC's Olympics HD channels at positions 450-473. If you have HD equipment but have never subscribed to Sky HD you can still see our HD Olympics channels but these will appear from 474-497. The channels are all labelled HD or SD so you will know which version you are watching.

Earlier this year, Roger Mosey announced the 3D coverage we will be showing during the Olympics on BBC HD. We will offer the Opening and Closing Ceremonies, the Men's 100m final and a daily evening highlights programme. You may also have seen that we broadcast live 3D coverage of the Wimbledon Ladies' and Men's finals, and that later this summer we will broadcast Planet Dinosaur and the Last Night of the Proms in 3D.

For 3D to work on BBC HD, we have to broadcast it at "1920 horizontal resolution", ie, with 1920 pixels across the width of the screen. Usually we broadcast conventional HD at 1440 resolution on digital terrestrial and digital satellite television, so we make a special change to our settings to broadcast BBC HD at 1920 when we need to do 3D broadcasts.

Making this change involves a fair amount of effort, plus there's always the risk that something goes awry. To minimise the effort and risk, I decided that we should broadcast BBC HD at 1920 for an extended period - from May to September. Then, to be fair to the other HD channels we broadcast in BBC controlled capacity on Freeview HD (BBC One HD, ITV1HD, Channel 4 HD*) we investigated whether we could broadcast all of them at 1920 resolution. I'm delighted to say that thanks to a huge amount of work from some very clever people in BBC Research & Development and our suppliers we can do that this summer. We implemented the changes in May to allow us to offer 3D coverage across the great summer of programming and we have moved BBC One HD on Sky and Freesat to 1920 too.

As regular readers of the BBC's blogs will know, 1920 resolution is something we've been aspiring to for some time so I thought I'd explain a bit about the considerations involved. We have to consider the trade-off between the benefits to our audiences of our being able to fit a whole extra channel into the multiplex (whether on digital terrestrial or digital satellite) versus any perceived picture quality benefits of increasing to 1920 resolution. At present the benefits are most apparent on 3D programming. Thanks to some upgrades of our coder systems along with many other tweaks to the way we multiplex services together, this summer we've been able to achieve 1920 on all the channels, whilst the gains would not have been sufficient to broadcast an additional channel. At the moment there is still a question about whether we'll be able to sustain 1920 resolution for the long term; I'll let you know more news on this when we have it.

*Clirlun for viewers in Wales

I'm really proud of what we've been able to achieve in the area of distribution for the Olympics and I hope you enjoy what we deliver. It really is going to be a fantastic summer of sport!

Alix Pryde is the director of BBC Distribution