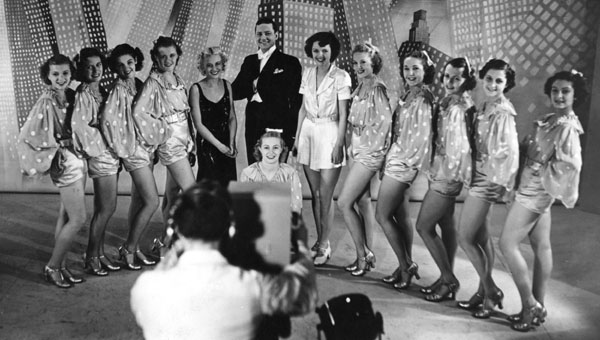 On 3 November on top of a hill in North London, an American singer called Adele Dixon, with a diction far away from our contemporary chart-topping Adele, sang these words: 'A mighty maze of mystic magic rays is all about us in the blue...' The rather headily alliterative lyric was attempting its own bit of propaganda: to explain to an unsuspecting British public what TV was all about.

Of course audiences had seen films in the cinema, but this was different. It was personal! In its own grumpy corner, the press sniffed at the new arrival... The Times was particularly unimpressed, intoning that man was basically a social animal, and would not forsake the gregarious pleasures of theatre and restaurants for 'the lonely pleasures of TV at home'. How very wrong they were.

Today it is 75 years since the BBC launched the world's first continuous television service - and how foreign a world without TV would be to us now. What of its early days? Every schoolboy/girl used to know that John Logie Baird invented television. Answer: no he didn't. He invented the idea of it, as he was the most passionate of propagandists for the new medium. But in fact, in the race for television in 1936, his 'mechanical' system of television proved to be completely untenable - inflexible cameras, uncomfortable 'spotlight studios', dangerous vats of chemicals (cyanide!), and a slow system of picture delivery. No, Marcon-EMI, with their 'electronic' system - slicker, more flexible, better quality, triumphed, and even though we might have wanted the plucky mad inventor Scot to win against the moneyed forces of EMI, it was not to be.

So that was the technical side, but what was there actually to watch in the mid 1930s? Well, when you step inside the lofty but narrow studio at Alexandra Palace (open specially the weekend of 5/6 Nov this year for the anniversary!), it is quite amazing when you discover what was made there - ballet troupes, opera companies, classic dramas, variety shows and cabaret, dance bands and performing animals all squeezed their way into its limited confines. The most popular programme was a show called Picture Page, the first interactive TV experience, when viewers phoned in their requests of what they'd like to see on air - and the BBC obligingly delivered, everything from tennis stars to everyday folk with sometimes extraordinary occupations. Miles of careful cable were also threaded out of the studio to capture the first outside broadcasts: the TV gardener in situ (the famous Mr Middleton of 'Dig for Victory' fame), the latest sporting triumphs on land and water, the Coronation of the King. A pell mell of experimentation and innovation. How dull life must have become when they knew how to do it!

So don't miss the opportunity to step inside the famous studio in Alexandra Palace, where it all began. The iconic tower mast on top of its corner wing is still there, the long black box of a studio still exerts an atmospheric pull, and there'll be a 1930s dance band and tea room to get you in the mood, as well as some futuristic TV too.

As we prepare for the switch off terrestrial TV, the launch of internet-enabled TV and experiment with HD and Super hi-Viz, it is clear that TV production has developed a long way since those early days. And how fitting and salutary it is to remember some of those first BBC pioneers who paved the way for everything that was to come. Those fools on the hill.

Robert Seatter is the the Head of BBC History