My dad is a physicist, working in quantum field theory, and he introduced me to the work of Richard Feynman at a very early age. Feynman is probably the most famous physicist after Einstein (though younger readers may prefer Brian Cox) and he managed to make some of the deepest mysteries of science accessible to us all.

In 1981 Feynman was featured in a BBC Horizon programme called 'The Pleasure of Finding Things Out', a title that was also used for a printed collection of his essays and interviews, and I'm sure my dad will be pleased that my current work with the Genome Project will bring this and many other treasures from the BBC's past to the attention of Feynman fans and others, and give all of us a way of finding out what the BBC has been broadcasting on television and radio, all the way back to 1923.

Genome will create a complete database of the BBC's broadcast history, giving details of every programme the BBC broadcast - or at least intended to broadcast - on radio or television since the schedule was first published in 1923. Since the information is not available electronically for most of that period we're taking a brute force approach and digitising the one complete record we do have: printed copies of the Radio Times.

We started in 2010 with a small-scale pilot and its success convinced us that the project was technically feasible and would be value for money. As I write we've scanned over 4,500 magazines and have imaged more than 360,000 pages, so things are moving well.

Why Are We Doing This?

Genome will provide a database of BBC programming that will be used to support a wide variety of applications and services provided by the BBC and others, but it has a deeper value too.

Most people find pleasure and comfort in recalling programmes which we watched on television or listened to on the radio. The BBC's broadcast output and the Radio Times reflect events and society at home and abroad, and Genome is a gateway to that past. This is not just about finding out what was on television on the day you were born, but an historical record which can enrich our knowledge of the world, discovering our past and influencing our future.

How We Did It

The first step was assembling the copies of the magazines themselves. As you'd expect, the BBC holds several full sets of Radio Times, including preservation copies at the BBC Written Archives centre in Caversham, but these are contained in bound volumes for reference. Rather than disbind them, we tried to acquire as many loose issues of the Radio Times as possible so that they could be scanned easily.

Fortunately, we were able to borrow loose magazines from private collectors including an extensive collection from the 1920s. BBC Worldwide lent us the loose collection they acquired from television historian Wallace Grevatt after his death in 2003.

Once the scanned images of the magazines had been produced, the mammoth task of capturing the text in the Radio Times could be begin.

This is largely being done automatically, but in order for this to be feasible we had to analyse the magazine formats, layouts and channel history over the 88 year period to create rules could be applied to capture the programme listings in a meaningful way.

We devised a schema which would house the various parts of the programme listings such as time, title, synopsis, cast, crew and so on, and doing this revealed just how complex the BBC's channel history is.

Here is a snapshot of the pre-war 'network and nations' radio services and how they merged or were replaced. It shows both the geographical transmitter history over this period and the complexity of the data sources we were dealing with. 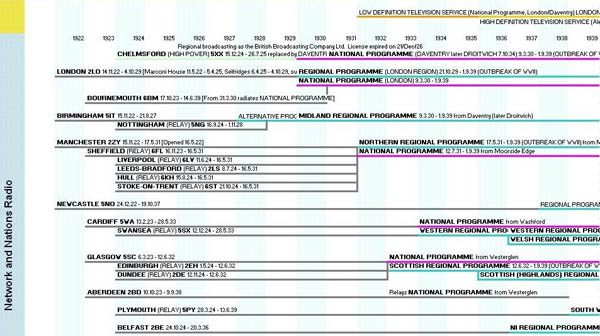 We also discovered that the Radio Times itself is complex due to the changing layouts and formats, but it is reasonable that editors in 1923 would not have worried about making life difficult for a team of experts trying to scan the magazines more than 80 years later.

Using optical character recognition (OCR) software to recognise the text and semantic rules to segment the information uncovered in the magazines, the data is available to us as a collection of XML (eXtensible Markup Language) files. These are not reader-friendly, so we have developed a tool that can read them and present the information in a more accessible format for checking and validation as well as allowing us to show off the amazing details of the BBC's schedule over the decades. 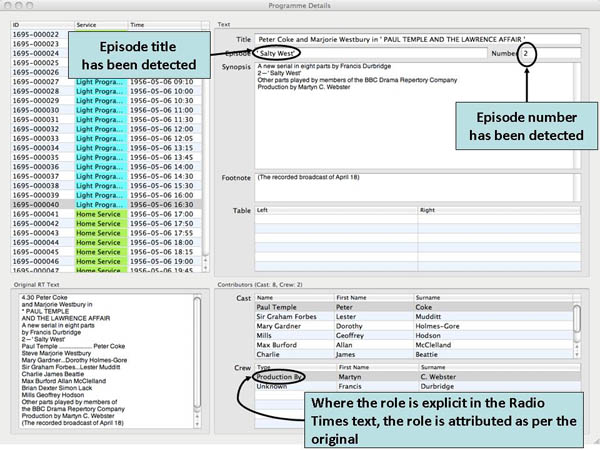