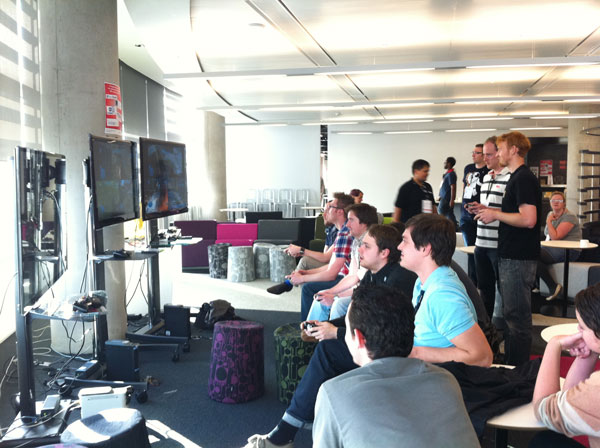 Last weekend we did something a bit different at the BBC. On Saturday 17th and Sunday 18th September we hosted the BBC's first ever BarCamp, in our northern home at MediaCityUK.

'What's a BarCamp?' I hear you cry. Well, it's been described as many things from an 'un-conference' to a 'catered conversation'. But really BarCamp is all about the ideas. People came to BBC North for this event buzzing with new ideas around technology, future media and a range of different interests including gaming, social media and... country music.

Right off the bat I felt that our new creative hub at MediaCityUK could provide BarCamp-ers with the perfect venue. So we opened up the spaces and brand new facilities in BBC Quay House to over 200 participants for a weekend of discussions, demos and interaction. No running order, no set agenda - just a big empty 'grid' of 20-minute slots where attendees could post their ideas to present a session over the course of two days. Highlights included: Should we Teach Computer Programming to Schoolchildren?; Tips to Build a 3D Scanner and even a debate on 'How to be Happy'. 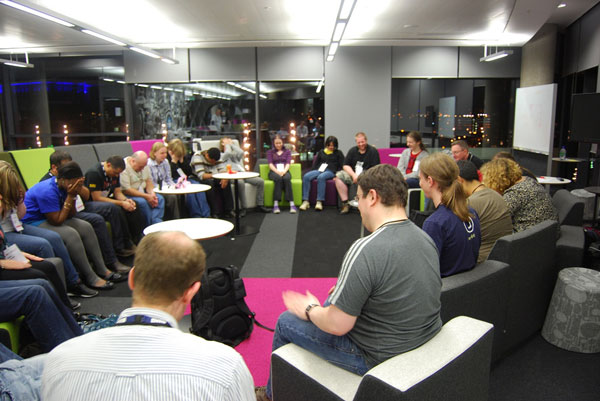 @PopCultureHound
Chris J. Thompson Great session on #digitalcomics at #bcmcuk today. Interesting to hear different perspectives/approaches to it. How do you like your comics?
Sep 18 via Twitter for AndroidFavoriteRetweetReply

@MysticMobile
Paul Coulton Thanks for nice feedback for my gamification talk at #bcmcuk#barcampmediacity heres the long version of the slides https://t.co/PUBeeqi0
Sep 17 via webFavoriteRetweetReply

We were supported by seasoned BarCamp team Geeks of London and the wonderful Manchester Girl Geeks who did a fantastic job encouraging women to attend the activities. In fact, it was one of the largest BarCamps ever held in the UK.

Of course we paused the sessions for regular food and drink intake, plus the obligatory 7.10pm mass screening of Doctor Who on BBC One, with popcorn! As the evening drew on the games began. There were marathon X-box games, PowerPoint Karaoke and rounds of the parlour game 'Werewolf'. In the early hours people left to catch a few hours sleep and some - christened the 'magnificent overnight 7' - even pulled an all-nighter. Many returned for another round of innovative sessions on the Sunday.

At BBC North our aim is to find new ways of working and it's events like BarCamp that will really help the BBC become a more open and collaborative organisation. We were proud to host the BBC's first BarCamp and judging from the feedback, it's the kind of thing we should be doing more of.

@hashpointfive
Shaf Choudry 1st BarCamp and had a brilliant time, thanks to @cubicgarden and all for organising a memorable event. Met tonnes of cool people #bcmcuk
Sep 18 via webFavoriteRetweetReply

@janetrimmer
Jane Trimmer Barcamp MediaCityUK #bcmcuk was BRILLIANT! Thanks to all who organised it. Hope it'll be a repeat event.
Sep 18 via webFavoriteRetweetReply