A season of BBC2 programmes about mixed-race Britain 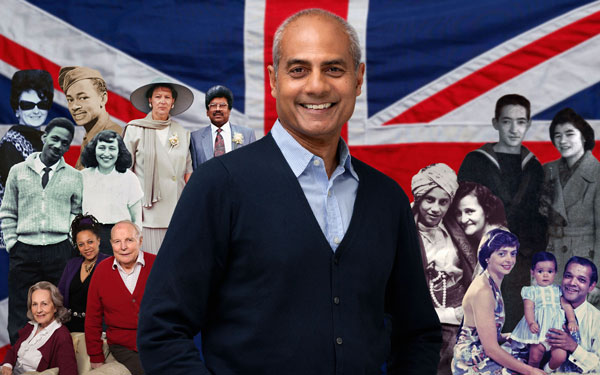 When my parents Bianca (Sicilian/Maltese) and Ade (Sierra Leonean/Gambian) got married there was still a lot of disapproval towards mixed-race marriages. White woman who partnered black men in the late 50s and 60s were often seen as 'loose' or 'immoral.' Certainly my brothers and I grew up in the 60s and 70s during a period of much sharper prejudice towards people who looked 'different'.

On April 29th 2001, a new category was added to the census. Simply called 'Mixed' it allowed mixed-race people for the very first time to tick a full range of boxes to describe their identities. Being mixed-race myself, this felt like a 'eureka' moment ...as if we had finally been accepted into the mainstream cultural landscape. 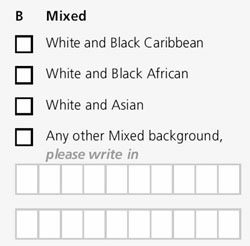 The 'Mixed' question from the 2001 Census

A few years later, while running some BBC career workshops at a South London school I couldn't help but notice how confident and upbeat the young mixed-race people seemed to be. It seemed that life and aspirations had certainly changed for the better for young mixed people since my day.

And this in turn became the seeds of the mixed-race season which launches tonight. Crucially, this is not just a season for mixed-race people, or those in a mixed-race relationship. It is relevant to everyone.

BBC Two is committed to reflecting contemporary society and Britain in 2011 has proportionately one of the largest mixed-race populations in the Western world. So the history of mixed-race Britain plays a part in the history of all of us.

It is for this reason that we wanted the season to explore the mixed experience in Britain - and around the world, from the distant past to the present day, using the testimonies of a range of people to illuminate this seldom-told story. We wanted to explore these issues irrespective of whether the people involved are, for example, of White UK, African, African-Caribbean, Chinese or South Asian origin.

The season does not claim to examine every single mixed-race issue in the UK, nor that we have represented every combination of mixed-race relationship. That would be impossible. What we wanted to do is provide a snapshot of mixed-race Britain past and present, and to demonstrate that this story is a key part of Britain's social and cultural landscape.

But we do have an exciting mix of drama and documentaries that provide a snapshot of mixed-race Britain and demonstrate that this story is a key part of Britain's social and cultural landscape. We wanted especially to look at: the experience of someone who was born mixed-race in the 1930s and who also happened to be a great British cultural icon (Shirley); the science of genetic inheritance and the nature versus nurture debate (Twincredibles); the imperial and global history of mixing (How The World Got Mixed Up) plus a sharp close up look at mixed-race relationships and wider society in the twentieth and early twenty first centuries (Mixed Britannia).

Leading the season is Shirley, an intimate and revealing drama that tells the life-story for Dame Shirley Bassey. She's one of Britain's national treasures but her rise to international stardom was no ordinary rags-to-riches story. It's an extraordinary tale of overcoming poverty through personal sacrifice and we're thrilled that our fantastic cast will bring this story to life for our viewers.

Following on from this is Twincredibles, a fascinating documentary that delves behind the headlines and explores what life is like for five sets of black and white twins born to mixed parents. Many of us are familiar with the newspaper pictures which pop up every few years, but this film unpeels the impact this genetic phenomenon has on how the twins see themselves and how the outside world views them.

In the one-off history documentary, How The World Got Mixed Up, we examine the complex history of interracial relationships and chronicles the shifts in attitudes that for centuries have created controversy and anxiety all around the world.

If the 19th century was a story of mixed-race being created through white men travelling out to Asia, Africa and the New World and creating a mixed-race population outside Britain then Mixed Britannia tells the 20th century story of African, Asian, Arab and Caribbean men coming to Britain and forming mixed-race partnerships here. Presented by George Alagiah, this three-part series explores the remarkable and untold story of Britain's mixed-race community through the decades and examines how mixed-race has become one of the country's fastest growing ethnic groups. But most of all, the series tells an extraordinary tale of love, of couples coming together to fight prejudice and create a new society.

So from the mixed category being included in the census, to Britain in 2011 - what a difference a decade makes. By March 2010 research at Cardiff University was identifying that mixed-race people were perceived as the most attractive, and with increasing numbers of high profile mixed-race relationships it suddenly felt that the entire narrative had turned a corner. So this year when I filled in my census form and ticked mixed white and black African it didn't feel like a special moment. It simply felt perfectly normal to be British and mixed.

Chantal Badjie is Editorial Lead on the Mixed Race Season