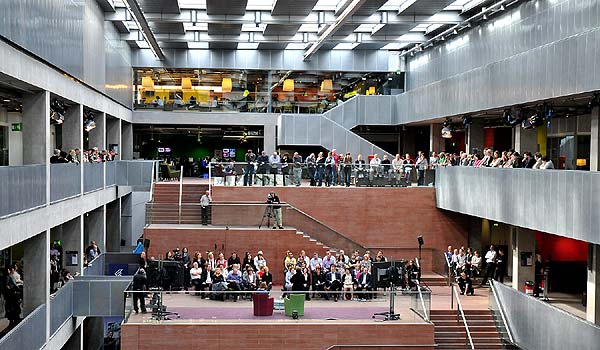 Yesterday I was in Glasgow giving a progress report to BBC staff about Delivering Quality First (DQF) - our initiative to reshape the BBC for the future. The BBC's mission remains the same - to inform, educate and entertain through programmes and services of high quality, originality and value. We are delivering that mission; 97% of the British public tune in to the BBC every week. That is an incredible privilege that brings with it great responsibility.

Our challenge is how to continue to fulfill our mission between now and 2016 whilst making 20 per cent savings. This is about finding better ways of working which will prepare us for a connected future. Linked to this we need to ensure that the BBC is creating programmes about the whole of Britain - serving our audiences throughout the UK.

Local and national broadcasting is at the heart of what we do. And as we move towards 2016 more of what we do will be done outside of London. Salford is just about to open for business - we are 6 weeks away. Sport, Radio 5 live, Children's are all coming together in one location. This is the model for the BBC of the future, and where many of the ideas from DQF will be piloted.

Pacific Quay is one of the most modern, state of the art, digital broadcasting facilities in the world and has helped BBC Scotland to already achieve a 30 per cent efficiency saving. We will be putting forward the really big decisions to the BBC Trust in July. They will then conduct a public consultation before any final decisions are made.

However in the meantime as we have talked with BBC staff there are some really useful ideas that they have come up to make us a more effective organisation, and which we can address right now. Some of the concerns that staff have raised include a frustration with outdated broadcasting equipment which can become a barrier to their ability to do their job well. There is also a feeling that there are too many layers of management and there is too much complexity in decision making.

We've listened to these concerns and are taking action to create a more effective and simpler BBC with clearer accountability:

These common sense decisions are about getting the basics right before we embark on the bigger transformation ahead.