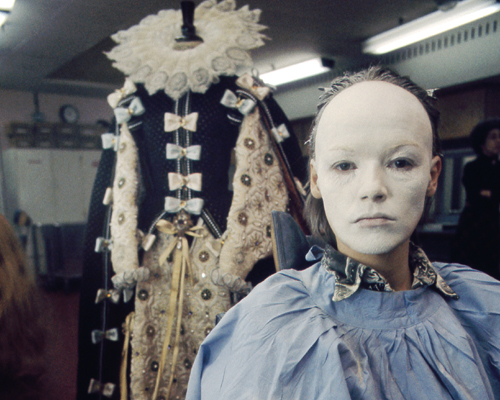 Elizabeth R hit the BBC airwaves 40 years ago on 17 Feb 1971. It followed of course the huge success of The Six Wives of Henry VIII a year earlier, and adopted the same prize-winning formula: six different screenwriters each taking a different slice of the monarch’s life and each writing a 90-minute drama. It capitalised on the new arrival of glorious colour TV, and it was of course graced at its centre by the towering performance of Glenda Jackson as The Virgin Queen (hear her talk about preparing for the role here).

In retrospect, her subsequent career in politics does not seem strange at all. She had after all learnt her script from one of its greatest exponents!

Elizabeth R consolidated too Britain’s enduring love affair with the Tudors: on TV, film, in museums and galleries, at the heart of the school curriculum. As if our nation history blazed only in a few moments of memorability: The Tudors, The Civil War, Victoria and the Empire, and WW2. The rest is a vague fog.

Surprising therefore that in a recent survey of TV costume drama by BBC History Magazine, readers voted the Tudors (in all its varied dramatic manifestations) surprisingly low in its poll.  Top of the tree was Pride & Prejudice – Colin Firth (the non-stuttering version) bending out of surly Darcy pride to woo the independently spirited Lizzie Bennett (Jennifer Ehle) was a predictable number one (though not strictly historical drama). The Tudors (2007 version) came in at number 15, with Elizabeth R and Six Wives of Henry VIII at 18 and 17 respectively.

Ahead of them was the early 20th century cohort: Downton Abbey and Upstairs Downstairs, and the late 19th century depiction of village life, Cranford. As if, faced by austerity Britain, we prefer to flee to a more ordered world of social hierarchy and bonnet dress codes. You know where you are in a good bonnet!

Not that the real world of costume drama is necessarily easy. In 1971 Glenda Jackson endured physical agonies with costumes that were so heavily padded she had trouble breathing and was unable to bend her arms. Some were also so heavy that she had to remain seated, others so big she had trouble walking through doors.  And that was after she had already spent six hours in make up and prosthetics ageing herself up for the later programmes.

It makes a life in politics seem positively pain-free!