MediaCityUK - there's a lot in a name 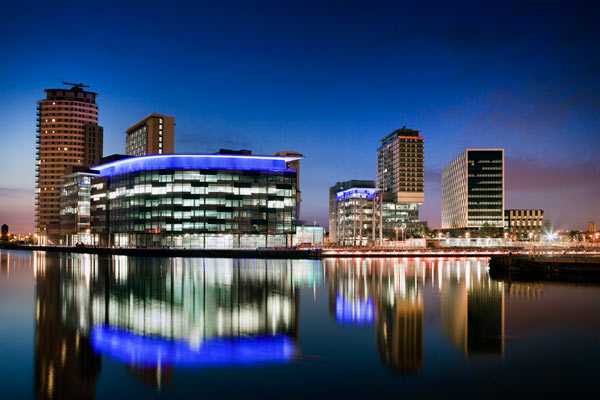 These days canals seem so leisurely. All fisherman and holiday makers. A far cry from how they once were.

I grew up next to the Leeds and Liverpool canal, once a bustling highway of traffic, filled with energy and enterprise, and it’s strange to think that these vital waterways will soon be back at the heart of my working life.

Our new home in the north sits on the banks of the 36 mile long Manchester Ship Canal, built between 1887 and 1894, and one of the industrial wonders of the world – it was audacious, politically controversial and fraught with engineering challenges.

In fact it all sounds painfully familiar….

But it is not just the tough business backdrop that draws parallels with our move, the comparisons between the BBC’s big move to the north and the impact the canals had over a century ago are tempting to draw.

Once again the north can lead the way in terms of ambition - creativly and technologically - that will benefit both the region and the whole UK. Particularly important in these tough times.

Canals were part of a revolution - building trade routes and business, making connections and creating networks where previously none existed.

And although MediaCityUK might not deliver a revolution on the same scale, it is a key part of the ongoing northern renaissance.

In the same way that the canal system offered a real time connection that took the North West to the world and brought the world back, MediaCityUK can do exactly the same for the BBC across the region.

It can be a mainline for our audiences into the heart of the media, using the most advanced technology and innovation to connect in new and creative ways.

It can be a place where people and ideas come together and where ambition and experience stand side by side.

The Ship Canal should be an inspiration for what the BBC is hoping to achieve, and although the three new buildings that make up our new home have been affectionately known as A,B and C for the past few years, these names must now make way for something more fitting. Something of a tribute.

A reminder of what has been before and an inspiration for what is to come.

That’s why we have chosen to give each of our buildings a simple name that roots it in the history and drama of our extraordinary waterside home.

BBC Bridge House, will be home to among others Blue Peter, BBC Bitesize, Mastermind and Dragons’ Den, helping capture the imagination of audiences of all ages.

BBC Dock House, the new base for teams including Songs of Praise, Research and Development and The Radcliffe and Maconie show will connect with licence payers through the interaction of great content and technological innovation.

BBC Quay House, where output from the likes of BBC Breakfast, Radio 5 Live, Match of the Day and North West Tonight will take up residence, will be a home for live and event content that aims to capture the imagination of the whole country and bring the nation together.

Talking of old and new transport systems coming together, the tram line that runs into MediaCityUK opens next week and although you won’t be able to get into our buildings yet, as we are installing some pretty complex technology, just seeing it up close for yourself reveals the size of our ambition and brings to life the scale and complexity of our task.

Even the builders of the extraordinary ship canal would have been impressed by the studios and post production facilities, cutting edge digital technology, 24/7 newsrooms and radio networks, television platforms and some of the best websites in the world, all in one area ready to relive those past glories.

And although the London based press have spent the past few weeks printing pictures of the site from 6 months ago and passing them off as current, the photo below taken last week by Peel Media, shows just how far along we really are. Indeed the site took another leap forward this week when the whole BBC Philharmonic Orchestra came together for the first time in their brand new purpose built studio, serenading the few remaining builders with some simply majestic Rachmaninov.

So we are marching on and the buildings are looking and sounding pretty impressive - perfect representations of the kind of BBC we want to be in the region.

Big but not brash

New and exciting, but comfortable in our surroundings

Our big new adventure must create a ripple effect of economic and creative benefit across the whole of the north, to deliver that renaissance I mentioned earlier. But it is right that the names of our buildings reflect the soil in which we have laid the foundations, an inspiring spot brimming with history and now expectation.