BBC Genome: The Complete Broadcast History of the BBC

Most people know that the BBC does not have a copy of every programme it has ever broadcast. The main reason for this is that when broadcasting began it was seen as an ephemeral medium, and there was no way to record and store what was being transmitted.

Although it became possible to record programmes in the 1950s, magnetic tape was very expensive and recording equipment bulky and complicated, and until relatively recently only those programmes that were considered worth the cost and effort of recording and archiving for posterity were retained. The head of BBC Information and Archives, Sarah Hayes, has already written about this in detail for the Internet blog back in September 2009.

However, even though we may not have a copy of each programme in the BBC's vast archive, there may still be something related to or derived from the original programme: stills, non-broadcast footage, music, documentation, props or other material connected with what was broadcast.

The skilled researchers who work with programme-makers inside the BBC and independent production companies are used to hunting for additional material and know where to look, but on the whole the public don't even know where to start. BBC Genome is our attempt to solve that problem, by creating a comprehensive, easy-to-use online catalogue of all of the BBC's programmes so that people can discover which programmes we have, which we don't have, when and where they were broadcast and even what else we've got that might interest them.

We're working on the basis that "full or near-full public access to archives is both achievable and the right ultimate goal" and, sitting at the heart of a reshaped BBC Online, BBC Genome is the first step towards that goal. It will provide a timeline from the foundation of the British Broadcasting Company in 1922 and provide details of the programmes, channels and services which map on to that timeline, bringing the broadcast history of the BBC to life.

What BBC Genome does

The BBC stores information about the programmes we make and broadcast in many different ways, each one designed to support a specific task or function, but none of these are comprehensive nor in a publicly accessible or searchable form. We want to ensure that our broadcast history becomes and remains a working asset for audiences, and at the end of last year we set about finding a way to reconstruct the BBC's broadcast history all the way back to 1922.

We needed to create a central core, or spine, for the catalogue of broadcast records and there was one source in particular that provided a comprehensive record of the BBC's broadcast history going back to 1923: Radio Times. 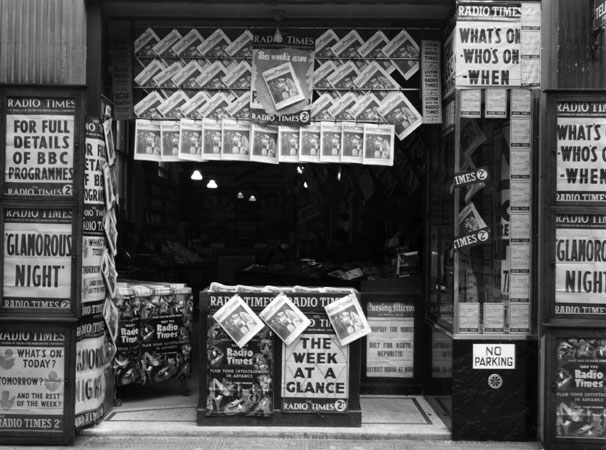 It is an ideal place to begin because we have easy access to it, it contains a record of everything we intended to broadcast - even if what actually went on air wasn't what we planned to show - and it is in a structure and format that people readily recognise, with basic but consistent details for all programmes, along with regional variations. It even lists radio frequencies!

We started with a pilot project to scan two years' worth of Radio Times and extract the programme listings details from the scanned pages, in order to establish the approach and processes. Working with experts at a UK firm which specialises in projects like ours and with the British Library, every page of the 1948 and 1977 editions of Radio Times was scanned. 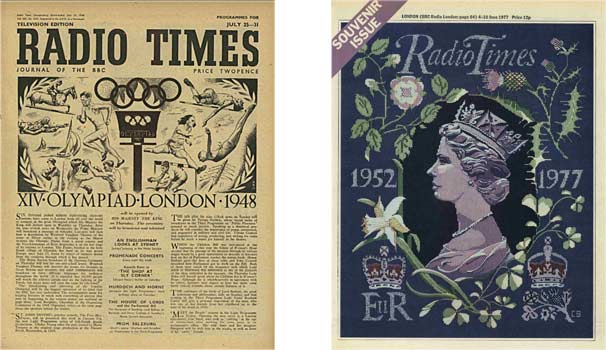 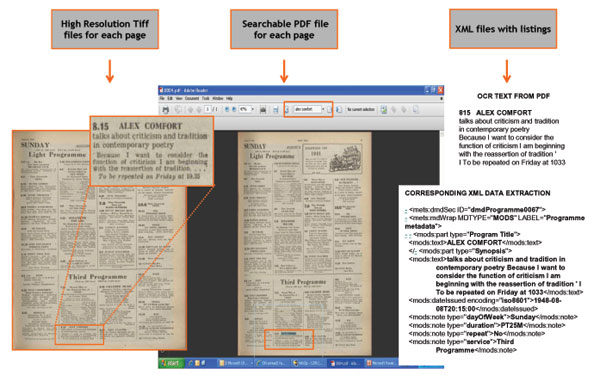 The images were then converted into computer-readable text using optical character recognition (OCR) software before being divided into separate channel and programme listings so that we could identify details including the programme title, channel name, date and time of broadcast and a synopsis of the show. All of this information was stored in a database that we used to support an experimental website that presented the information in a form similar to BBC Programmes pages.

These are a couple of the early pages complementing the BBC Programmes services that we created from the XML files.

During the process we learned an awful lot and collaborated with several BBC departments as we worked out how to make the process accurate and repeatable. As you would expect, we set a very tough and exacting technical specification for the scanning, partly to optimise the accuracy of the OCR process, but just as importantly for long-term preservation purposes. We didn't want anyone in the BBC to have to come back and pay to scan the pages again in five, ten or even thirty years' time if we could avoid it.

At the end of the trial we knew we could extract programme records from Radio Times, but the other important part of the project was to create a BBC channel and service history. There are records for when channels and services began, ended or were rebranded, just not in a single accessible place, and we quickly discovered how complicated the BBC's broadcast history is. For example, in order to work out when regional opt-outs started we needed to search Radio Times and a host of other sources at the BBC Written Archives Centre.

The picture below shows over 20 different editions of Radio Times all for the same week in 1971. 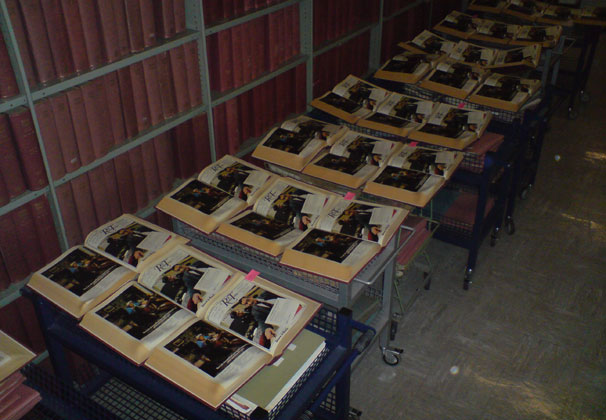 What's next for BBC Genome?

In September we will begin the full-scale project of digitising over 80 years' worth of broadcast records. That's approximately 400,000 pages of Radio Times, 3 million programmes and 300 million words to recognise through OCR.

In less than a year we expect the Radio Times digitisation project to be completed and for the first time there will be, in one place, a comprehensive record of every programme.

What you'll be able to search and discover

Initially, you will be able to search by programme title, by year, day and time. Once we fully populate the database with contributors, programme synopses and other sources of data, you'll be able to find people and places and all the programme records they feature in.

You might well discover during your searches that the programme schedules are not entirely correct. They were, of course, correct when each issue of Radio Times was published, but in the early days of radio and television technical hitches sometimes affected the schedules. Similarly, throughout the BBC's broadcast history, changes in live broadcasts and major events at home and abroad will have meant that the published schedules in Radio Times were not always accurate.

Radio Times is owned by the BBC's commercial arm BBC Worldwide and we currently do not have the rights to show the scanned pages themselves, although we hope we may be able to in the future. However, you will be able to take a journey back in time and rediscover how the BBC's networks and programmes reflect Britain's social history. You can already access some archive materials via the collections featured on the BBC Archive site, and Genome will provide access to additional archive information.

Although the BBC only has about 20-25% of the programmes in its physical archive, this still amounts to more than a million hours of output. Radio Times will provide the programme listing and, once that's done, we will start to provide access to the programmes themselves along with other material such as scripts or photos - which will be especially useful where physical programmes no longer exist or where we don't have the rights to make the programme itself available - and begin to make it all visible from BBC Online.

Making everything available will take time, but the Radio Times programme records will soon create the spine for Genome and are a vital first step in bringing the BBC's broadcast history to life.

One last note: Radio Times was first published on 28 September 1923 and I have referred to the foundation of the BBC in 1922. Using other sources, we do plan to make programme records available from the first ever BBC broadcast on 14 November 1922 when the Marconi transmitting station 2LO was taken over by the BBC. It truly will be a complete broadcast history of the BBC!