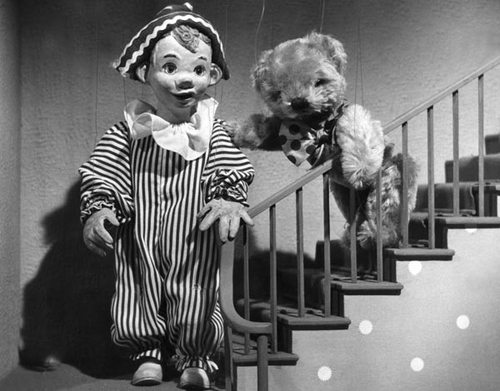 Andy Pandy is - unbelievably - 60 years old this month! The first real star of BBC Children's TV, in his blue and white striped romper suit and odd little tricorne hat, he has survived where others far bigger and far more powerful have fallen by the wayside...

So who came up with the idea? Andy was created by Freda Lingstrom and Maria Bird, and he first bounced (though is 'bounce' quite the right word for his faltering, string-bound step?) onto our screens on 11 July 1950. Andy himself never spoke. Maria Bird narrated the show and formed the intermediary between Andy and the child viewers: Look who's here, Andy... Audrey Atterbury operated Andy via his very visible strings, and songs were sung by Janet Ferber. Andy had two famous friends: Teddy (a teddy bear) and Looby Loo (a rag doll).  Every programme ended with the song "Time to go home", as Andy waved goodbye and returned to his basket.

For those of a certain age, he's a symbol of a safe and comfortable (and very middle class) world. There's no evil in this garden: friends are always there to come and play with you, the picnic basket is ready at the end of the show as a secure refuge, and Andy always waves goodbye and always goes home. Where the heart is. 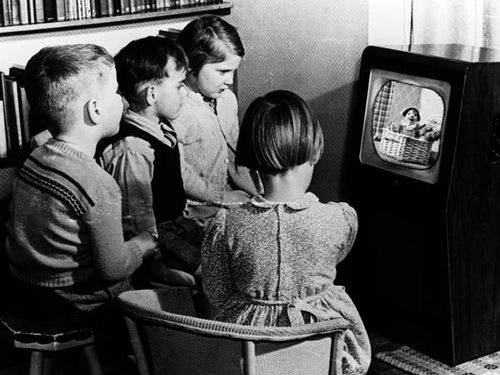 But behind the slow simplicity, there was more. This was a real 'first' in children's programming, as Freda created the first daily schedule of TV programming for the very young. By 1955, there was a programme for every day of the week: Picture Book (Mon), Andy Pandy (Tues), The Flowerpot Men (Wed), Rag, Tag and Bobtail (Thurs), The Woodentops (Fri). Moreover, she seemed to understand that children want to relate to other children - so, in spite of the highly directive adult narrator, Andy is a three-year old little boy staring back at his fellow viewers of the same age.

This was the trick that Teletubbies also understood decades later. In particular, Bill & Ben with their flibadob-flobadob language (vociferous complaints from outraged middle class teacher parents, such as mine!) were an early precursor of that series' parade of toddler-shaped characters, chuckling and gurgling their baby talk language in time with their captivated audience.

It says something too about the endurable quality of Andy Pandy that the 26 programmes went on being repeated until 1969. Then in 1970, some were remade in colour. Later, in 2002, he got another make over as a stop motion animation, voiced by Tom Conti. In effect, I suppose, the story is one of childhood's immortal tales - that toys are real, they come to life when we turn our backs, only pretend to be lifeless. Yesterday's Andy Pandy, today's Toy Story.

A last word: the 'real' Andy Pandy apparently was puppeteer Audrey Atterbury's son, Paul, who went on to become one of the Antiques Roadshow's experts. Which goes to prove that there's no escape from a BBC past!