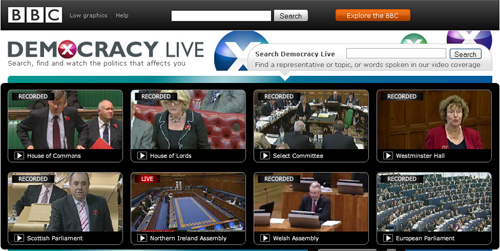 If you're a user of Twitter, you may have spotted the quiet arrival of the BBC's new website called Democracy Live at the end of last week.

The site is officially launched today, but for technical reasons we lifted the barriers to the outside world on Thursday evening. Although we didn't announce its availability, such is the power of social media that people were quick to find us and start tweeting about the site.

Total Politics even reviewed Democracy Live on Friday and concluded by saying: "It brings a decidedly 21st-century edge to watching parliamentary discussion."

"DL", as it's become known in the BBC, is the result of about 18 months of development work.

It brings together, for the first time in the BBC, live and on-demand video coverage of proceedings in our national political institutions and the European Parliament. Democracy Live builds on previously available content in the form of video streams, guides and biographies.

But the real magic lies in the site's search function, which is unlike anything the BBC has done before.

By its very nature, the business of politics can be lengthy. Can you/would you watch an entire six-hour long debate from the House of Commons? Possibly. But you'd need to be a battle-hardened political observer or someone with a very keen interest in the subject to do so.

Democracy Live gives you the ability to search for a specific word or words spoken in the proceedings and the results will give you links to the points in the video where they were spoken. The ability to home in on the passages which are of direct interest and relevance to you is at the heart of Democracy Live's purpose.

Our search is powered by a speech-to-text system built by two companies called Blinkx and Autonomy which create transcriptions of the words spoken in the video.

Generally speaking, the industry standard for accuracy in speech-to-text systems is reckoned to be about 80%. In Democracy Live tests, we've seen slightly higher than that. We've taken account of different accents across the UK but the system might still be a bit confused by some words. Have a look at the explanation of how the site works for more about search and other questions you may have.

One aspect we're particularly proud of is that we've managed to deliver good results for speech-to-text in Welsh, which, we're told, is unique.

Blogs and websites have become as much a part of political reporting as traditional print and media outlets and that's why we're making as much of our video as possible available for embedding elsewhere.

At launch, you can take content from all the institutions with the exception of the House of Commons and the House of Lords (discussions continue with the authorities at Westminster). However, you can't edit our video for embedding. What you see is what you get.

You can also "Follow" a representative. Choose a biography - these come to us from the parliamentary experts Dods - either by searching for it or getting there from the 'Your representatives' section and click on the button in the top right. The 'Follow' function will appear on the site shortly.

Another innovation is the video wall on the home page. You'll be able to spot quickly when proceedings are live, and when they're not you can click through to an earlier item of business.

Elsewhere on Democracy Live, you'll find guides to each institution and a guide to who makes decisions in the UK's devolved system of government.

Politics and political debate are part of our everyday lives and events of the last few months have seen a renewed interest - for positive and negative reasons - in what goes on in our political institutions.

We hope that Democracy Live proves a useful addition to how people access and understand these processes. Let us know what you think by email at democracylive@bbc.co.uk. You can also follow us on Twitter at bbcdemlive.