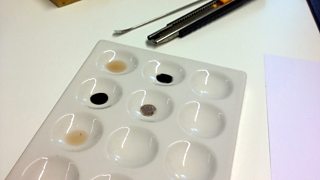 It feels a lot like a doctor’s surgery: dove-white walls, a slightly clinical antiseptic smell. The difference is, it's not you that's being checked but your pills.

The waiting room is filling up when we arrive. The staff tell us it's like this every week. It's unprecedented to have access to a free service that lets you have your pills and powders tested, let alone one that's funded by the government. But here in the Netherlands, you see they do things differently.

We're taken into an intimate room where two casually-dressed women sit behind a desk laden with drug paraphernalia. Petri dishes, razor blades, an acidic type substance – “the same stuff they use to preserve dead bodies” says our Trimbos Institute guide Sander after noticing my confused face.

Karen and Renee are the first to enter, and, with a flourish of quintessential Dutch candor, the couple explain why they've dropped in: “We take drugs to party, so the music and the colours are stronger and also, for sex so the sex is better. Why do we have them tested? Because we like drugs, but we like our lives too and we don't want to die.”

We all know drugs are inherently unsafe. The tests won't take into consideration the environment where you're taking the MDMA or amphetamines and they won't prevent your organs from burning if your body temperature reaches 42 degrees (a common cause of drug related deaths). But they will let you know if there are any unfamiliar substances lurking inside and alert you to any increased risk.

The pragmatic approach is born out of a culture that believes in accepting the reality of life and shaping policy in a way that recognises that human behavior cannot be completely controlled. In some cases they believe, the best the state can do is minimize the harm associated with unpredictable pursuits like getting high.

Many experts in the Netherlands believe that in places like the UK young people are risking their lives with new and increasingly fatal 'legal highs'. Walking through Utrecht, a city that used to have a huge drugs problem, Sander tells us those legal highs aren't taking off in the Netherlands because the government takes a more practical, less penal approach to dealing with users. Sander says here, they take the drugs they can get tested because they can get a more solid indication of what they're made of.

Raymond, director of the Trimbos institute frowns, shaking his head resolutely at any suggestion that government cash is being used to facilitate people's recreational drug use.

So how do they justify it? And could and should countries like the UK look at how the Dutch have done it and try to introduce a similar pill testing system here?

If you missed Anna Holligan's report you can listen here (at 7.30am, available until September 3rd)

Can a radio studio be powered only by renewable energy?