Sikhism was founded by Guru Nanak around 500 years ago in a place called the Punjab. This is an area which spans part of India and Pakistan in South Asia today.

What do Sikhs believe?

Guru Nanak is the founder of Sikhism. Guru means ‘Teacher’.

Sikhism is still based on his teachings and those of the nine Sikh Gurus who followed him.

The Sikh community of men and women is known as the Khalsa which means the 'Community of the Pure'.

In order to become a Sikh and join the Khalsa, people need to follow the Five Ks.

Click on the picture to learn about the Five Ks

What is the Sikh holy book?

The Sikh holy book is called the Guru Granth Sahib. The tenth Guru, Guru Gobind Singh, said that after him there would be no other living gurus. Instead, Sikhs could look at their holy book for guidance. This is why Sikhs call their holy book a Guru.

The Guru Granth Sahib is a collection of lessons from the ten gurus as well as Sikh, Hindu and Muslim saints. It is written in Punjabi and is greatly respected by all Sikhs as the living word of God. It is kept on a raised platform under a canopy in the Sikh place of worship. All Sikhs take off their shoes when they are near it.

Where do Sikhs worship?

The Sikh place of worship is called a Gurdwara which means 'Gateway to the Guru'. A Gurdwara is any building where the Guru Granth Sahib is kept.

In the UK, Sikhs usually go to the Gurdwara on Sundays. During the services they listen to teachings based on the Guru Granth Sahib. They also chant and say prayers from the gurus. These are called Keertan.

The service ends in a langar (a shared meal). Everyone is welcome to share the meal.

The Sikh symbol is called the Khanda. Click on the picture to learn about the three parts. 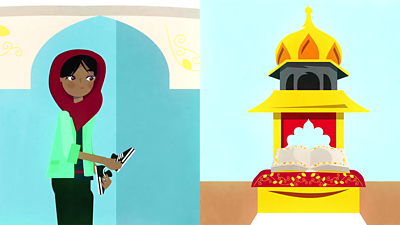 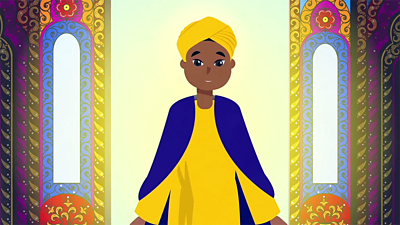 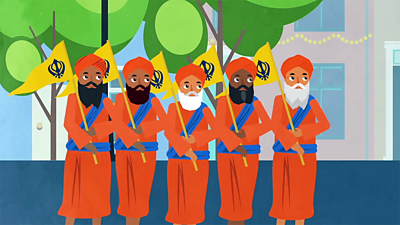