By the end of the first century AD, Rome had most of southern Britain under its control. However, it was a different story in Scotland - this was a much wilder place. It was still controlled by fierce warrior tribes, who refused to bow to the Roman Empire.

Scotland had valuable natural resources, like lead, silver and gold. The Romans could also get rich by charging the people they conquered taxes and forcing them to become slaves. But the tribes weren't about to give up their lands without a fight.

The Romans came for ‘the glory of Rome’ too. They wanted to conquer new lands and make their empire even bigger and better.

Some of the earliest evidence for the Romans in Scotland comes from the Gask Ridge. This earth-bank defence in Perthshire dates from around AD70. The Gask Ridge is about 20 miles (32 km) long. The Romans set up forts and watch towers along it.

Who was living in Scotland?

In Roman times, there was no such country as Scotland. The area of Britain now known as Scotland was called ‘Caledonia’, and the people were known as the ‘Caledonians’.

Back then, Caledonia was made up of groups of people or tribes. Some tribes were happy to get on peacefully with the Romans, but others fought back.

In the summer of AD84 some Caledonian tribes joined forces and made a stand against the invading Roman army. The two sides fought at a place called Mons Graupius (the Grampian Mountains). The Romans were led by the Roman general Julius Agricola and the Caledonians were led by a fierce chief named Calgacus.

After the battle of Mons Graupius, most Caledonian tribes accepted the Roman occupation. Some tribes were bribed or given gifts by the Romans to accept their rule. However, some northern tribes continued to battle the Romans.

Why did the Romans build walls?

The Romans didn't just go around building walls because they liked to. They did it to protect themselves from the unfriendly northern tribes.

Their attacks were costing the Romans time and money. So in AD122, the Emperor Hadrian ordered his soldiers to build a wall between Roman Britain and Caledonia. The Romans also built forts and stationed soldiers along the wall to keep watch and fend off any attacks.

In AD140 the Romans added another wall further north, between the River Clyde and the River Forth. It was called the Antonine Wall after the Emperor Antoninus. But it was often attacked by the Caledonian tribes. In AD160 the Romans abandoned this wall and made Hadrian’s Wall the border.

What happened to the Romans in Scotland?

Even though some historians think the Romans marched as far north as Cawdor, near Inverness, the Romans never really settled in the north. Their main concern was to protect Roman Britain from attack.

In the 3rd century AD there was more fighting along Hadrian's Wall. Emperor Septimius Severus had to come to Britain to fight the invading tribes. This was the last major Roman campaign in Scotland. Although his soldiers won the battles, he got sick and died at York in AD211.

Attacks increased in the 4th century and the Roman army finally packed up and left in AD410. Barbarian tribes were attacking the city of Rome and the Emperor Honorius decided that the Roman legions in Britain were needed elsewhere. 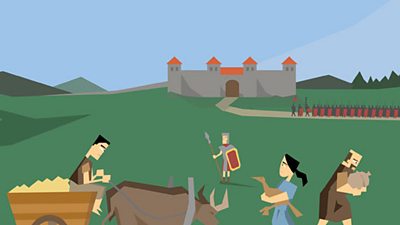 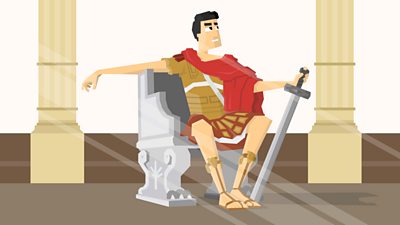