Just before dawn on the icy plains of Central Asia, a giant hanger door opens and a train towing a 2,000 tonne Soyuz rocket rolls to the launch pad in the morning light.

On launch day, three astronauts pack into the capsule on top of the rocket and make the journey to the International Space Station (ISS) above. After lift-off, the rocket quickly burns through its fuel. Once the tanks are empty, they break away from the rest of the rocket and fall back to Earth.

When the astronauts reach the ISS, it’ll be their home for around the next six months. The space station is a kind of orbiting science lab about 400 kilometres above the earth.

Astronauts spend years training for the launch day. Every action is carefully controlled and prepared for, right down to the tiniest detail.

Nothing is left to chance. The astronauts are strapped in to a Soyuz rocket charged with 300 tonnes of highly explosive fuel - one minor miscalculation could be disastrous.

It takes less than nine minutes for the astronauts to get to space. As the Soyuz bursts out of the atmosphere, the sky flashes from blue to black and the capsule is left orbiting the Earth.

But the space station isn't floating in one place - it’s flying around the planet at 17,000 miles per hour!

The astronauts have to delicately guide their capsule to meet a tiny docking station on the ISS. It’s a ballet between hundreds of billions of pounds of space technology - all done while wheeling around the world at 10 times the speed of a bullet.

To get a rocket off the ground, its engines need to provide enough thrust to overcome gravity - the force that pulls everything back to Earth.

Move the arrow over the video to see the forces in action.

Over 300 years ago, Isaac Newton first described how applying a force in one direction creates an equal but opposite force in the other direction. In other words, if you want to make a rocket go up, something needs to push down. So as the rapidly expanding gas from the burning fuel is forced down towards the ground, it forces the rocket up into the sky. 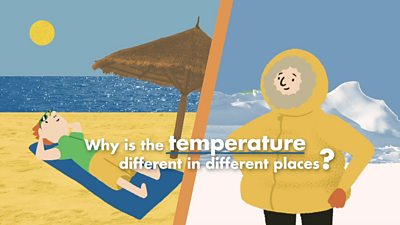 Why is the temperature different in different places on Earth? 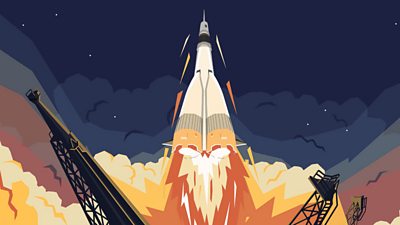