What was life like in the Mesolithic Stone Age?

Life in the Mesolithic period

The Stone Age in Britain took place between around 15000BC to 2500BC. The Mesolithic period is known as the middle stone age.

Humans were hunter-gatherers and had to catch or find everything they ate. They moved from place to place in search of food. This is called a nomadic lifestyle. Humans lived this way during the Palaeolithic (early stone age) and Mesolithic periods.

How did humans survive?

Hunting and gathering food was the focus of everyone’s lives. It only began to change when humans began to farm. In the early Stone Age, people made simple hand-axes out of stones. They made hammers from bones or antlers and they sharpened sticks to use as hunting spears.

Stone Age people cut up their food with sharpened stones and cooked it on a fire. After a good day’s hunting people could feast on meat. But the next day they had to start finding food again!

They used animal skins to make clothes and shelters.

Watch: how were tools and weapons made?

What animals lived in prehistoric Britain?

Climate change during the Stone Age caused animal life in Britain to go through several changes.

During the Ice Ages, Britain was covered by ice and snow. Herds of mammoths, reindeer and woolly rhinoceroses roamed across the snow and brown bears sheltered in caves.

In the warm periods between the Ice Ages, Britain became as hot as Africa is today! Elephants, hippos, rhinos and hyenas all moved north through Europe to live in Britain.

The last Ice Age ended around 15,000 years ago and the British climate became very similar to how it is today. The forests were full of foxes and red squirrels. Wolves and bears lived in the hills.

Britain was home to most of the species of birds, fish and shellfish we have today, so people had a wide range of food to eat.

What kind of art did humans make?

Stone Age Britons made necklaces and bracelets from tusks, bones and shells. They also drew patterns on their bodies, using a kind of paint made from ochre (a type of red clay).

No cave paintings have been found in Britain, but Stone Age Britons probably painted scenes like the ones found at Lascaux in France. The Lascaux cave paintings were created around 14,000 years ago. They show animals as well as some human hunters.

Some historians believe that Stone Age paintings had a religious meaning. They think the painted animals were meant to represent powerful spirits. Sadly, no one really knows the truth of their meaning.

Explore this picture to find out about Grey Otter, an imaginary Stone Age boy. Details about his way of life are based on evidence found at a camp in Star Carr in Yorkshire.

Explore the image below to find out what footprints, bones and tools can tell us about prehistoric people.

This video from BBC Teach uses archaeological evidence that has been found to imagine what the lives of people could have been like. 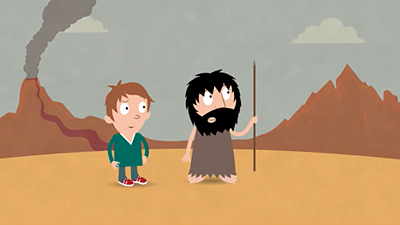 What do we know about prehistoric Britain?

What was life like in the Mesolithic Stone Age? 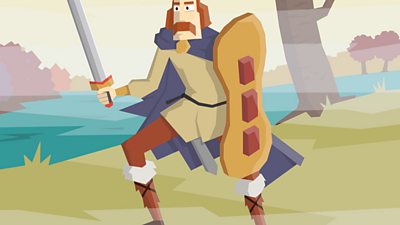 Who were the Celts?

What was life like in the Neolithic Stone Age?

Who were the Celts?