What does a seaside town do to survive?

The breathtaking beauty of Northern Ireland’s Causeway coast has been attracting visitors for generations. One of the most popular destinations is Portrush.

The town is used to the highs and lows that come from relying on tourism. But with cheap flights abroad and changing tastes over the years, Portrush has had to move with the times.

In 1855 Portrush railway station was opened. After this, the town became a major destination for holidays, attracting visitors from across Ireland and beyond.

Thousands used the railway to visit Portrush’s three sandy beaches, which were considered some of the best in Ireland. Activities including sailing and golf became particularly popular in the area.

During the first half of the 20th Century, Portrush was regarded as one of the major resort towns in Ireland.

But the outbreak of World War Two brought about a decline in the number of visitors to the town.

Tourism across Northern Ireland suffered because of the 30 year conflict known as 'The Troubles', which lasted from 1968 to 1998. But peace has brought many more visitors, and Portrush has seen the benefits of that.

In Northern Ireland, tourism is a fast growing industry, with 4.9 million people visiting in 2017.

This is a huge increase on the 1.5 million tourists who visited in 2000.

Many tourists come for the natural beauty and historical sites popularised by TV shows like Game of Thrones.

Tourism isn’t only vital for Portrush but for the entire Northern Ireland economy. In 2017 tourists spent £926 million. That's £2.5 million every day. 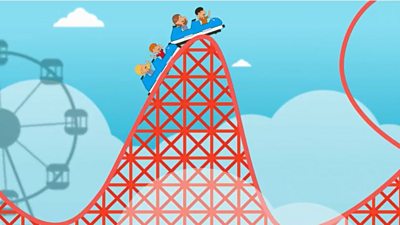 How does a roller coaster work? 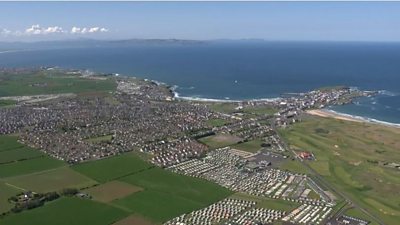 What does a seaside town do to survive?

How does a roller coaster work?