Although he dies early in chapter three, Chris's father is a dominant force in the book.

John Guthrie is a fine man in many ways – honest, hard-working and loyal to his friends. However he has character flaws such as pride and lust which cause him to become embittered and he ends as a tragic figure.

John Guthrie impresses us with his energy, seeming always in a rush. The words 'fleet' and 'fleetly' [fast] are frequently used about him. He struggles heroically with the difficult soil of Blawearie, coarse land, wet, raw and red clay. At his funeral Chris reflects that he'd never rested working and chaving [labouring] for them. 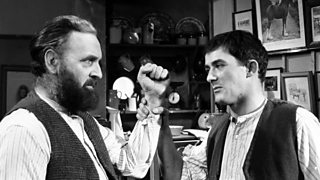 His efficiency as a farmer allowed him to amass £300 to leave to Chris. This is a considerable sum for a crofter. Even after his death, his ghost seems to haunt Blawearie energetically, with sharp quick footsteps, running so fleetly up the stairs, impatient and unresting.

Guthrie has an explosive temper which he frequently takes out on his family – Father swore up and down the stairs… he banged the door. As Chris gazes at him lying dead in his coffin, she remembers how touchy he was, quick enough he'd have raged at you had you glowered at his face like this.

He even loses his temper with God, shaking his fist at the sky, crying, Ay, laugh, you Mucker! It is apparently his anger at Will's defiance which brings on the stroke that paralyses and eventually kills him.

John finds it hard to control his sex drive, and the way he treats women is repulsive to the reader. He continues to demand his marital rights from his wife Jean, although she is exhausted by child-bearing. Ultimately, this drives Jean to suicide.

Even more disturbing is his sexual attraction to Chris. He rages at her for being a shameless limmer, when he sees her in her underwear while treading the blankets on a hot day, she saw a caged beast peep from her father's eyes. He pads down in the night to Chris's bedroom, like a great cat, leaving her sleepless with terror. Even when he is paralysed he whispers to her to come to him.

A contrasting aspect of Guthrie's character is his intellect. He respects education and boasts to the minister of Chris's intelligence – Gibbon says to her, I hear you're right clever, Chrissie, and go up to the Duncairn college. Along with Chris, Guthrie appreciates the sermon on the Golden Age delivered by the old minister Colquhoun which is above the heads of most other villagers.

Pride is another of Guthrie's character traits. When the smart lady in the car addresses him as my man, he retorts I'm not your man. After he is then evicted, his application for another good farm is turned down when he rashly reprimands the land agent for calling him 'Guthrie' – Mister Guthrie to you.

When he feels Mr Gibbon is not being sufficiently deferential, father cocked his red beard at the minister and glinted at him like an icicle. The villagers gloat when his pride suffers a blow with Will's departure.

The reader is alienated by the frequent violence of Guthrie's conduct. He often hits his sons. On the journey to Blawearie when Dod can't move the cattle, John's response is to hit him so hard he falls in the ditch. He knocks Will down for calling his horse Jehovah. If I ever hear you use that word again I'll libb [castrate] you. He also beats Will severely for using his gun.

However, he is invariably kind to his horses, Clyde, Bess and Nell. At the funeral, Chris remembers how he used to treat her tenderly when she was young – he'd smiled at her and called her his lass.

At the fire at Peesie's Knapp, John is first on the scene, and is responsible for rescuing Chae Strachan's family who are sound asleep.

Guthrie punches the steward who tries to eject Chae Strachan from the political meeting. At the funeral, Long Rob sums him up as a fine neighbour. All the men of Kinraddie show their respect by remaining bare-headed.

John Guthrie has a sense of God's wrath being imminent. He thinks the savages who raised the standing stones will be burning in hell. Sexuality of any kind disturbs him. He has a prudish attitude to Chris's story-book, calling it Dirt. When Chris and Will sleep in the same bed because they're freezing, Will knows John would assume the worst, as he does also when Chris tells him about daft Andy chasing her. Guthrie's inner torment arouses some sympathy in the reader.

Guthrie is fixed in his ways. He insists on farming the old-fashioned way, for example using an old-fashioned reaper to harvest his grain instead of a more modern binder. He uses a scythe rather than machinery to mow hay. This attitude is seen to be misguided when Ewan takes over Blawearie and transforms it by using modern methods. However, we can admire him to an extent for remaining loyal to the old way of life.

The word 'dour' is often used to describe John Guthrie. He feels humiliated by Jean's suicide, which leads him to avoid company. He gradually becomes embittered by the struggle against his own inner demons and the intractable land of Blawearie.

We feel sympathy when he notes that the day of the crofter was fell near finished. This implies the whole way of life, of neighbourliness and mutual help within the community. Our sympathy is aroused by his despair at seeing a darkness down on the land he loved better than his soul or God.